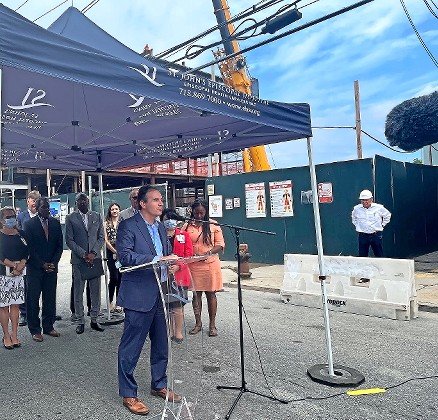 A yellow crane lowered the final beam into place to complete the steel structure that will become St. John’s Episcopal Hospital’s new Ambulatory Pavilion, which is expected to open next spring, across the street from the Far Rockaway hospital on Beach 19th Street.

The moment was celebrated by a gathering of hospital staff and elected officials at a “topping off” ceremony on July 7. The crowd watched a massive crane grab the last roof beam from the ground and lift it to the top of the four-story steel building skeleton on Brookhaven Avenue.

This is pretty significant for us to be able to put a four-story, state-of-the-art ambulatory structure here for the community and the people we serve,” hospital CEO Gerard Walsh said.

St. John’s is the only hospital on the Rockaway peninsula, and is the hospital closest to Nassau’s Five Towns.

The Rockaways had the second-highest death toll in New York City, according to the city’s Department of Health.

And “we know that Rockaway has disproportionate rates (of) cancer,” said Queens Borough President Donovan Richards Jr., “so more cancer treatment will also be available.”

The new ambulatory facility will be helpful not only to the Rockaways, but to surrounding communities as well, Assemblyman Khaleel Anderson said. “Not just in the peninsula — you’re in Long Island, (and) folks in Inwood and in Cedarhurst use this hospital,” he said.

Walsh blueprinted the project by “really hearing what the community needs,” Assemblywoman Stacey Pheffer-Amato said. “We’ve done that through surveys and asking it on the street, at our civic meetings, at street fairs.” she added, “We want this hospital to grow and be a solid point in our community, of our health care, to expand throughout the peninsula.”

“Just recently, the Congressional Appropriations Committee approved $3 million to renovate our behavioral health,” the hospital’s vice president of external affairs, Renee Hastick-Motes, said, “so we’re just waiting for the Senate and the White House to approve that, but we know they’re going to do that.”

“This building is a big milestone in us being able to complete our mission in taking care of our community,” Walsh said. “And the community deserves state-of-the-art care and state-of-the-art facilities like this.”