Facing up to the unlearned lessons of 9/11 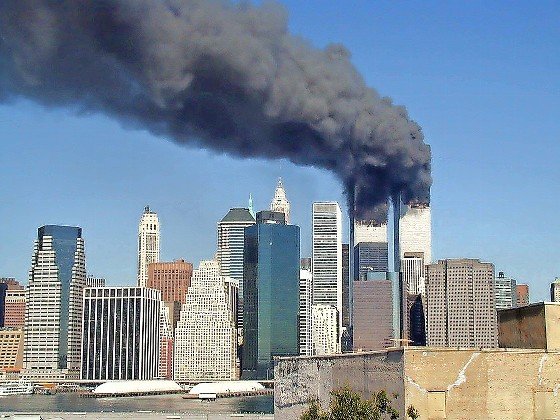 A view of the World Trade Center’s Twin Towers after they were hit by Al Qaeda terrorist-flown planes on Sept. 11, 2001.
Michael Foran via WikiCommons

A short memory may be helpful as a coping mechanism, but it is deadly in matters of foreign policy.”
By Ruthie Blum

Sunday marked the twenty-first anniversary of the Sept. 11, 2001 attacks. The magnitude of the audacious assault on key symbols of American greatness and power — the World Trade Center in New York and the Pentagon in Arlington, Virginia — was so extreme that it was likened to an apocalypse.

The Twin Towers toppled, with some desperate office workers opting to die by jumping out of windows rather than remain with the thousands of others who met their painful end inside the crumbling inferno.

The shockwaves at home and abroad were compounded by the fact that the United States had been insulated from combat on its soil (other than during the Civil War of 1861-1865) and from Islamist terrorism. In the space of some two hours on that fateful morning, Americans were shaken out of the blissfully false sense of security that was responsible for initial news reports of a possible aviation accident.

We Israelis, on the other hand, understood from the first minute that this was no mishap. Though just as horrified and taken aback as everyone else by the scope and location of the mass murder, we were not surprised by its onset.

The Jewish state was in the throes of a suicide-bombing war, which came to be called the Second Intifada, launched exactly a year earlier by the Palestinian Authority. It was the result of repeated capitulation to the demands of arch-terrorist PLO chief Yasser Arafat. The more Israel groveled, the more empowered the Nobel Peace Prize laureate became.

As I described at the time, for the 12 months before 9/11, we had been spending our days trying to calculate which buses might blow up on our way to work or our kids’ route to school; which café, restaurant or discotheque was too risky to frequent; and what unattended bags, backpacks or sidelong glances from certain dubious characters were suspicious.

Yes, heads were literally rolling in seas of Jewish blood on the streets of Jerusalem, Tel Aviv and elsewhere, and would continue to do so for a total of nearly four and a half years. And this was just a taste of the ongoing attempt to annihilate Israel since its establishment in 1948. It was also proof, if any were needed by those of us who bemoaned the disastrous Oslo Accords of 1993 and 1995, that diplomacy with Islamist political ideologues not only doesn’t work, but fans their flames.

The subsequent Camp David Summit between then-President Bill Clinton, Israel’s prime minister, Ehud Barak, and Arafat in July 2000, was the immediate precursor to, cause of and excuse for the latter’s call for a fresh round of Jew-slaughtering. It was par, then, for Palestinians to celebrate on 9/11, which many of them did with great fanfare.

While a short memory may be helpful as a coping mechanism, it is deadly in matters of foreign policy. Barack Obama’s entry into the White House in 2009 was a perfect example.

His first order of business was to renounce American exceptionalism and conduct “outreach” to the radical Muslim world. Islamists took this to mean that Uncle Sam, the “Great Satan,” had been brought to his knees, thanks to their efforts. They weren’t entirely wrong.

Obama’s proceeding to invest serious energy in begging the greatest state sponsor of terrorism to negotiate a nuclear deal only served to strengthen the resolve of the ayatollahs to achieve military and religious hegemony over the “infidels.”

By the time that the mullah-led regime finally “agreed” in 2015 to sign the Joint Comprehensive Plan of Action, it had finagled the terms to its benefit. The removal of sanctions and billions of dollars in cash that it received were just what it needed to infuse life into its centrifuges and fill the coffers of its terrorist proxies throughout the Middle East and beyond.

Obama’s successor, Donald Trump, adopted the opposite approach. It wasn’t merely that he ended up exiting the JCPOA in 2018 (after being shown by then-Israeli prime minister the trove of documents that the Mossad had retrieved from a warehouse in Tehran, which illustrated Iranian violations). He also started a “maximum pressure” campaign of increased sanctions.

Cutting off the money supply was necessary, both for slowing down the nuclear program and for curbing the cash flow to terrorists. Just when this endeavor was beginning to have an effect, Joe Biden took over the reins in the Oval Office and reversed course — right back to that of the days when he was Obama’s second-in-command; and with many of the same colleagues.

Iran’s response has been predictable: upping its conditions for deigning to be courted by the P5+1. It has the luxury to do this, while waiting for a new influx of multi-billions, due to the circumvention of sanctions by many countries and/or corporations within them.

Meanwhile and as a result, Tehran-financed terrorism against Israelis has been escalating. So, too, have vapid claims by Team Biden about its commitment to prevent Iran from obtaining nukes. Oh, and equally meaningless statements relating to Israel’s right to defend itself.

So far, the only thing keeping a lid on the next JCPOA is Iranian intransigence. As was the case when Obama was “leading from behind,” Tehran is holding all the cards. In the words of the late Yogi Berra, “It’s like déjà vu all over again.”

On the anniversary of 9/11, let us remember why not to find that the least bit amusing.