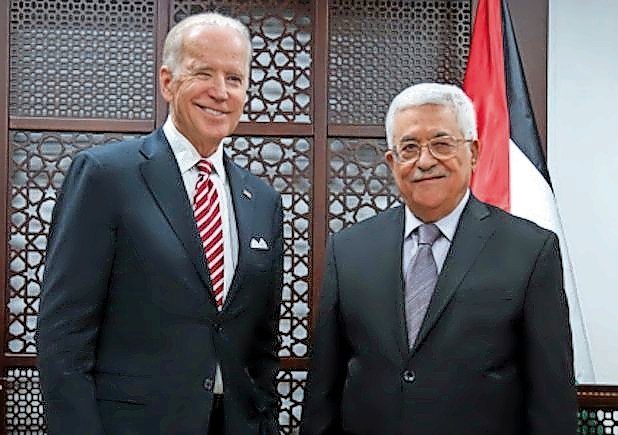 The more Jews the terrorist factions, including the PA, murder, the greater their chances of inheriting Mahmoud Abbas.”
By Caroline Glick

The deadly bombings at two Jerusalem bus stops last Wednesday morning were the first bombing attacks Israelis have suffered in their capital in recent years.

They shouldn’t have surprised anyone, though. Jerusalem has been the scene of a steadily escalating stream of Palestinian stabbing, shooting and vehicular attacks against Jews since the start of the year. In recent weeks, Palestinian terror levels have risen steeply, particularly in Judea and Samaria and Jerusalem. Last week, three people were killed by a Palestinian terrorist in Ariel. Shootings, firebombs, and stoning attacks happen throughout the day and night on the roads, and increasingly in Israeli communities in Judea and Samaria.

The Jerusalem bus stop bombings were also, apparently, a sign that Iran has taken a central role in directing terror attacks in Israel. For the past several months, the most active terror group in Judea and Samaria and Gaza has been Islamic Jihad, which is a wholly-owned subsidiary of Iran. September’s Palestinian missile campaign against Israel from Gaza was undertaken almost exclusively by Islamic Jihad, while its operational commander directed the assault from Tehran.

On Thursday morning, an Iranian hacker group affiliated with the regime released security camera footage of the Wednesday morning attack in Jerusalem. The hackers announced on their Telegram page that they have infiltrated and taken control of security cameras in Jerusalem — and perhaps in other areas of Israel.

This is the second significant cyber attack by Iranian entities in recent months. The same group claimed credit for a hack of the air raid sirens in Eilat and caused the system to go off several times during the summer.

Reports on the source of the footage remain unclear. Contradictory claims were reported on an hourly basis throughout Thursday. But what is clear enough is that Iran did hack into the security cameras of some official Israeli security body. The implications of the Iranian hack on Jerusalem security cameras are serious. The implications of Iran’s direct involvement in terror assaults on Israel from Palestinians in Judea and Samaria and Gaza are strategic.

Before considering those implications, it is important to note that the Biden administration is totally committed either to not noticing anything that is happening, or to denying that what is happening has any significance. As far as the administration is concerned, the only important force in Palestinian society is the PLO-controlled Palestinian Authority. And the primary thrust of US policy towards Israel today is to demand that the Jewish state “strengthen the PA.”

During his meetings with Israeli officials, Amr demanded that Israel move forward — if possible before the incoming government of designated Prime Minister Benjamin Netanyahu is sworn into office — with approving projects that will “strengthen” the Palestinian Authority financially and diplomatically. Amr’s argument to his lame-duck Israel interlocutors was that the PA is “on the verge of collapse”; it must be saved from collapse at all costs; Israel is responsible for preventing the PA’s collapse; and Israel cannot expect the PA to cooperate with IDF counter-terror operations without receiving something in return.

Hence, Amr demanded that Israel’s lame-duck leaders approve the projects that will enrich and legitimize the PA

Around the time Amr was berating his Israeli interlocutors in Jerusalem, outgoing IDF Chief of General Staff Lt. Gen. Aviv Kochavi traveled to Washington in the hopes of impressing on the administration the importance of acting militarily against Iran’s nuclear installations in the immediate term, as Iran moves to enrich uranium to weapons grade.

Rather than take Kochavi’s warnings seriously, National Security Adviser Jake Sullivan devoted much of his conversation with Kochavi to repeating Amr’s talking points. He demanded that Israel prevent the PA from collapsing and that Israel’s lame-duck leaders approve the projects aimed at strengthening the PA economically and diplomatically.

If the administration is interested in stabilizing the situation, fighting Palestinian terrorism and cultivating peaceful ties between the Palestinians and Israel that would lead to the establishment of a Palestinian state at peace with Israel, its obsession with “strengthening the PA” makes absolutely no sense.

As it has been for its 28-year history, the PA’s primary activities have nothing to do with governing the Palestinians, fighting terrorism, cultivating peace with Israel or building a coherent nation-state. Instead, since the PA was founded by force of the peace deals the PLO signed with Israel in the 1990s, its main activities have been sponsoring terrorism, inciting terrorism, funding terrorism, stealing state lands in Area C of Judea and Samaria, and running a diplomatic offensive against Israel at the UN and international legal bodies whose goal is to delegitimize Israel’s very existence.

The only significant change in the PA’s modus operandi over the past several months has been its military forces’ increased direct involvement in carrying out terror attacks. Since March, Palestinian security forces have been taking more and more active roles in the terror assaults against Israel, particularly in northern Samaria and the Benjamin district. The sons of senior PA security officers have engaged in the terrorist murder of Israelis. And the PA has encouraged and extolled the shift.

Last month, for instance, PA Prime Minister Muhammad Shtayyeh went to Jenin to visit the families of terrorists. He was flanked by PA Brig. Gen. Fathi Hazem. Hazem is the new celebrity Palestinian terrorist, wanted by Israel. His son Ra’ad killed three Israelis and wounded six in a terror attack in Tel Aviv in April. His son Ahed carried out several shooting attacks against IDF soldiers before being killed. Hazem and his sons, like other terrorists, are celebrated and revered by PA leaders such as Mahmoud Abbas and Shtayyeh, and by PA schools, universities, media organs and religious leaders every day.

The answer to all of these questions begins with the fact that PLO chief and PA chairman Mahmoud Abbas is 87, ailing and widely expected to die in the near future. In anticipation of his death, Palestinian terror groups, and the PA, are jockeying for position and influence in the hopes of seizing power after Abbas leaves the scene.

Over the years, analysts assumed that after Abbas dies, Palestinian society will descend into a bloody civil war. But the recent escalation of terror attacks indicates that the Palestinian succession crisis, and civil war such as it is, is playing out much differently.

Rather than kill each other, Palestinian terrorists seek to build their power and influence by murdering Jews. The more Jews the various factions murder, the more powerful they become.

This conceptual model explains both the expanded involvement of the PA directly in attacks, and the rise overall in attacks. It also explains why Iran has decided to get involved directly in Palestinian attacks. Iran’s regime wants its proxies to replace Abbas, and by getting involved in directing their attacks, Iran increases its chance of taking over. Indeed, the nature of the Palestinian power struggle is tailor-made for the mullahs.

Since all the Palestinian factions share the same enthusiasm for killing Israeli Jews, none of them has an ideological problem with accepting Iranian money or guidance for the operations. If Iran wants to take over the Palestinian theater, now is the time to act. So it is.

These circumstances are rife with strategic implications for Israel’s war planners. But specifically with regards to the Palestinians, they expose the utter futility of the Israeli left’s hopes of disengaging from the Palestinians by among other things, withdrawing from Judea and Samaria along the lines set out by the Oslo peace process and supported by the Biden administration.

Israel cannot stand back and watch the Palestinians kill each other because that is not what they are doing now, and it is unlikely that that is what they will be doing after Abbas dies. Instead, we are likely to see more of what they are doing now, and worse. After Abbas passes away, Palestinian factions, including the PA, will continue to compete for power and turf by killing Israelis, wherever they are.

Given this reality, the only way for Israel to defend itself in the short and long run is by ending the conceit that the PA is a legitimate governing body and carrying out a military operation that will dismantle the PA militias along with the rest of the terror groups operating in Judea and Samaria. For a short while, Israel may need to take on functions of civil governance in the Palestinian population centers. But once it asserts its full security control over the areas, will be able to delegate those powers to local leaders.

In light of the Biden administration’s obsessive support for the Palestinian Authority, and its refusal to acknowledge either the PA’s central role in cultivating hatred of Israel and Jews as the central organizing principle of Palestinian society, or the true nature of the power struggle already going on among the Palestinian terror groups, such an Israeli move can be expected to provoke an angry response from Washington.

It must prepare contingency plans for taking over the Palestinian population centers by force. And to the extent possible, it must prepare the ground diplomatically for the inevitable.