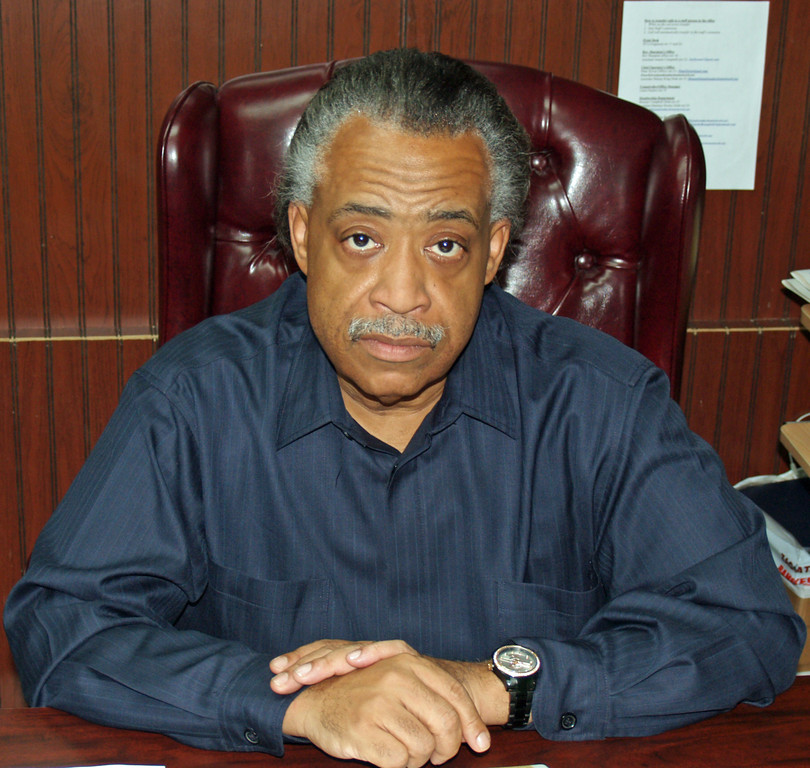 Al Sharpton poses for a photographer in 2007.
Photo by David Shankbone / Wikipedia Commons

Medgar Evers College, a branch of CUNY, the public City University of New York system that’s located in the middle of Crown Heights, has proposed granting an honorary doctorate to Al Sharpton. That’s the same Al Sharpton who fanned the flames of anti-Jewish hatred during the 1991 Crown Heights riot.

Keep in mind that CUNY is no longer primarily funded by New York City. Per the CUNY website, “public funding from New York State covers 60% of the operating budget for CUNY senior colleges and their entire capital budget.” In other words, Long Islanders, Al Sharpton’s honorary degree will be an example of your tax dollars at work.

Any public college honoring Al Sharpton is terrible, but a publicly-owned college in Crown Heights, where he is famous for inciting violence, is particularly egregious.

Per the New York Post, Sharpton would be honored as a man of “unwavering commitment to racial, educational and socioeconomic equity” at the school’s June 5 commencement. If approved by the CUNY board in May, Sharpton would get his honorary doctorate less than two miles away from the corner of President Street and Utica Avenue, the site of the 1991 car accident that ignited the riot.

Jewish-black tensions began to heat up in late July 1991 when CUNY professor Leonard Jeffries, who had a history of anti-Semitic slurs, presented a two-hour long speech claiming “rich Jews” financed the slave trade, control the film industry together with Italian mafia, and use that control to paint brutal stereotypes of blacks. After pressure from New York’s Jewish community, Jeffries was fired for his bigotry.

The city’s two black newspapers, as well as black radio station WLIB, joined activists such Sharpton, Colin Moore, C. Vernon Mason, Sonny Carson, and Lenora Fulani to showcase their approval of Jeffries’ scholarship and denounce his critics as race baiters. As part of the protest, the day before the riot began, Sharpton said, “If the Jews want to get it on, tell them to pin their yarmulkes back and come over to my house.”

Things in Crown Heights were tense when, on Monday, Aug. 19, 1991, a station wagon driven by Yosef Lifsh hit another car and bounced onto the sidewalk at 8:21 p.m. The station wagon was part of a three-car motorcade carrying the Lubavitcher Rebbe Menachem Schneerson, who was in a different car. The station wagon struck two black children, 7-year-old cousins Gavin and Angela Cato.

Lifsh got out of his car and tried to help — but the gathering crowd started to attack him. Within minutes, an ambulance from the Hasidic-run ambulance service, and two from the city’s Emergency Medical Service arrived. The police who showed up radioed for backup, reporting the station wagon’s driver and passengers had been assaulted. Police officer Nona Capace ordered the Hasidic ambulance to remove the battered Yosef Lifsh and his passenger from the scene. The injured children went by separate city ambulances to Kings County Hospital. Tragically, Gavin Cato was pronounced dead; his cousin, thankfully, survived.

A false rumor began to spread that the Hasidic ambulance crew had ignored the dying black child in favor of treating the Jewish men. Other rumors sprang up that Lifsh had been intoxicated (a breath alcohol test administered by the police proved his sobriety). More falsehoods circulated: Lifsh did not have a valid driver’s license; he went through a red light; the police prevented people including Gavin Cato’s father, from assisting in the rescue.

Ignited by falsehoods, resentment exploded into violence. Groups of young black men threw rocks, bottles, and debris at police, residents, and homes. And 29-year-old Australian Jewish scholar Yankel Rosenbaum was attacked by a gang of black teens. He was stabbed four times and died at approximately 2:30 am the next morning.

Despite some claims, Al Sharpton had nothing to do with the murder of Yankel Rosenbaum. The tax-dodger and racial agitator didn’t show up until the second day. On that second day of the riot, according to the sworn testimony of former Crown Heights resident Efraim Lipkind, Sharpton started agitating the crowd.

“We had a famous man, Al Sharpton, who came down, and he said Tuesday night, kill the Jews, two times. I heard him, and he started to lead a charge across the street to Utica.”

For three days following the accident, African and Caribbean Americans of the neighborhood, joined by growing numbers of non-residents, rioted. A Jew who ventured outside risked his life, though being in a home identifiable by a mezuzah made him a target anyway.  On the third day of the pogrom, Al Sharpton and Sonny Carson led a march of protesters chanting, “No Justice, No Peace!” “Death to the Jews!” and “Whose streets? Our streets!” The mob displayed anti-Semitic signs and burned an Israeli flag.

A week after the accident that started it all, at the funeral of Gavin Cato on Aug. 26, Sharpton gave a eulogy which fueled the fires of hatred.

“The world will tell us he was killed by accident. Yes, it was a social accident. ... It’s an accident to allow an apartheid ambulance service in the middle of Crown Heights. … Talk about how Oppenheimer in South Africa sends diamonds straight to Tel Aviv and deals with the diamond merchants right here in Crown Heights. The issue is not anti-Semitism; the issue is apartheid. ... All we want to say is what Jesus said: If you offend one of these little ones, you got to pay for it. No compromise, no meetings, no kaffe klatsch, no skinnin’ and grinnin’. Pay for your deeds.”

Reacting to the honorary degree, Rabbi Eli Cohen, executive director of the Crown Heights Jewish Community Council, told the Algemeiner that the award would undo years of efforts to rebuild relations between the Crown Heights communities.

“For more than 25 years we have worked closely with Medgar Evers and others to bring the community together. The idea of a college in Crown Heights honoring a man who incited anti-Semitic violence here goes against everything we have accomplished. Honorary doctorates should be awarded to individuals who are role models for the students of today. Sharpton does not fill that role. He has not even expressed true regret for his actions.”

Sharpton denies that he had anything to do with the riot. But does he sound like a man with “unwavering commitment to racial, educational and socioeconomic equity”?

Norman Rosenbaum, brother of the murdered Yankel, was shocked that Medgar Evers College would honor Sharpton. Rosenbaum told the Post, “This is not a person you honor. Within the last 27 years, he hasn’t changed. The same character is there. I think he’s a fraud and a charlatan whose actions over the years speak for themselves, and they’re not good actions. He’s a man who does not promote peace. He’s not told the truth.”

Rosenbaum is correct. Sharpton is a man who, throughout his public career, has had an unwavering commitment to racial divisiveness and anti-Semitism.

The Medgar Evers proposal needs to be approved by CUNY’s Committee on Academic Policy, Programs, and Research and then by the full CUNY board in May. It is very likely the board will approve the Sharpton doctorate. After all, less than two years ago they approved Linda Sarsour as commencement speaker for CUNY’s Graduate School of Public Health and Health Policy.

If a Crown Heights-based public university honors Al Sharpton, what’s next? A statue of Osama Bin Laden on the footprint of the Twin Towers he destroyed? A Hideki Tojo statue atop the USS Arizona Memorial in Pearl Harbor? How about a statue of Yasser Arafat outside the Sbarro pizza restaurant in Jerusalem?