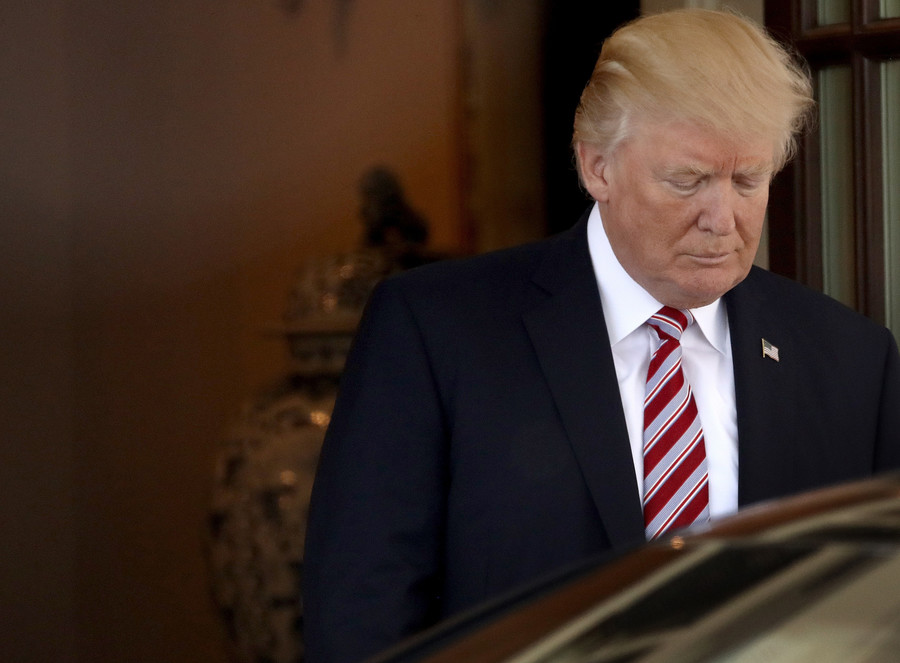 President Trump outside the White House on May 16.
Win McNamee/Getty Images
For The Jewish Star

President Trump’s supporters in the pro-Israel community were thrown into a tizzy this week after administration operatives made — and then double-downed on — statements questioning Israeli sovereignty over the Western Wall and, later, over Jerusalem itself.

The furor, just days before a presidential trip to Israel, began on Monday, when U.S. representatives in Jerusalem declined an Israeli request to have Prime Minister Netanyahu accompany the president when Trump visits the Western Wall. An official, later identified by Israel’s Channel 2 as David Berns, political counselor at the U.S. consulate in Jerusalem, reportedly snapped, “This isn’t your territory. This is in the West Bank.”

A White House spokesperson quickly tried to downplay the episode, stating that “the comments about the Western Wall were not authorized communication and they do not represent the position of the United States and certainly not of the president.”

But on Tuesday, White House National Security Adviser H.R. McMaster twice refused to be pinned down on whether the Western Wall was in Israel.

Pressed on whether the Trump administration saw the wall as being in Israel, McMaster demurred, saying it was a “policy decision.”

Later on Tuesday, during his daily press briefing, White House Press Secretary Sean Spicer was questioned about McMaster’s “refusal to say whether the Western Wall is in Israel or not.”

“Can you explain why you guys can’t answer that question?” a reporter asked.

“The Western Wall is obviously one of the holiest sites in the Jewish faith. It’s clearly in Jerusalem. But there’s been, it’s an issue that had serious, um, consideration. It’ll be a topic that’s going to be discussed during the president’s trip between parties that he meets with.”

Spicer’s stating that the wall is “clearly in Jerusalem” begs the question: Does the Trump administration consider Jerusalem itself to be in Israel?

Late on Tuesday, the Orthodox Union issued an alert in which it “expresses dismay” about McMaster’s “declining to affirm Western Wall’s status as within Israel” and Spicer’s subsequent dodge.

“The Western Wall is indeed the holiest site that Jews can visit today for prayer and reflection as it is the only accessible remnant of the Holy Temple that once stood in Jerusalem,” OU President Mark Bane said.

“Those prayers were answered 50 years ago next week as Jerusalem was reunified by Israeli forces in the Six Day War.”

Bane asked that President Trump “expli-citly affirm that the Western Wall was — and is now — by the grace of G-d under Israel’s sovereignty.” He further asked the president to “begin to fulfill his campaign pledge” to move the U.S. embassy in Israel to Jerusalem.

“We have praised his public stances concerning Israel but he seems to be backtracking at this point,” Klein told NBC News.