China’s hallowed status at the UN 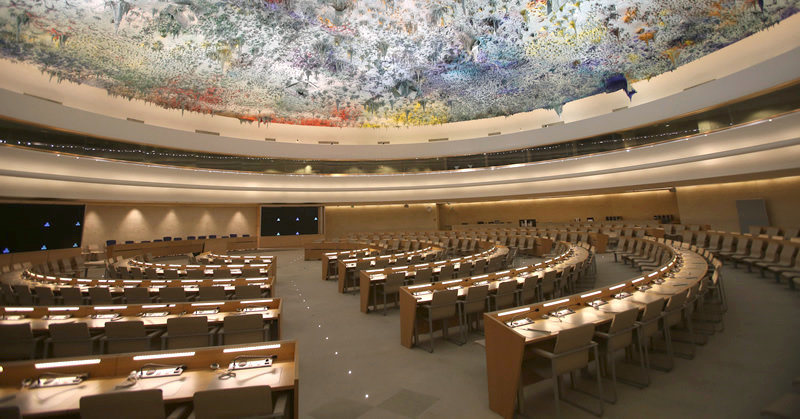 Human Rights and Alliance of Civilizations Room at the Palace of Nations in Geneva, the meeting room of the United Nations Human Rights Council.
Ludovic Courtès via WikiCommons
By Ben Cohen

If you are looking for an international institution that brazenly fawns over the world’s most despotic regimes regardless of how low they might sink on the moral scale, then the U.N. Human Rights Council (UNHRC) never fails to disappoint.

On April 2, the UNHRC appointed China’s Communist regime to a panel that selects investigators to take on some of the world’s key human-rights challenges, from freedom of speech to arbitrary detention to basic food security. UN Watch, the respected Geneva-based NGO that monitors the proceedings of the world body, rightly pointed out in response that it was “absurd and immoral for the U.N. to allow China’s oppressive government a key role in selecting officials who shape international human rights standards and report on violations worldwide.”

As UN Watch knows better than most, the “absurd” and the “immoral” are what defines the UNHRC. The flip side of UNHRC’s supine approach to regimes like China’s is its well-documented fixation with Israel’s alleged crimes, a permanent subject of the its agenda infamously known as “Item Seven.” At its 40th session this past February, the council passed five resolutions under this item, including one that endorsed an arms embargo against the Jewish state.

And now this same body has selected China — where being suspected of “espionage” or being accused of a “new crime” while you are held on an earlier charge are among the myriad rationales that allow the state to detain suspects arbitrarily and indefinitely — to assist the rest of the world with the problem of arbitrary detention.

Irrespective of the coronavirus pandemic, this latest UNHRC decision offends the most elementary standards of justice. Above all, it is a further example of how the various bodies and agencies that compose the U.N. system can be twisted to favor one member state even as they discriminate against another.

But the ongoing pandemic certainly amplifies concerns about China’s status at the UNHRC and within the United Nations more broadly.

By the time the council made its decision to appoint China to its panel in April, the timeline of the Chinese Communist Party’s willful deception of the international community over the impact and spread of COVID-19 within its borders was well-established. Indeed, in the very same week that the UNHRC’s decision enabled China to perpetuate the fiction that it is a lawful, responsible state on matters of human rights, American intelligence officials revealed that the Beijing regime was “intentionally” misleading the world over the true number of coronavirus cases and deaths in China itself.

Among those who willingly swallowed the Communist Party’s line was the leadership of the World Health Organization (WHO), which had been warned as early as Dec. 31 by doctors in Taiwan that the virus could be transmitted between humans, but which didn’t declare a global health emergency until Jan 30 — emphasizing, as it did so, its unwavering confidence in “China’s capacity to control the outbreak.”

There is also the matter of how the Chinese regime is restarting its economy with the rest of the world still in lockdown. Throughout this month, activists belonging to the persecuted Uyghur (pronounced: Weeg-ur) Muslim minority have amassed hundreds of videos that show thousands of young Uyghur men wearing anti-virus masks gathered at transport hubs around their region, from where trucks and buses transport them to factories in eastern parts of China.

“These videos came out at the time when coronavirus was spreading in China and around the world, when most Chinese companies were shutting down and no one was working,” one analyst told the U.S.-supported broadcaster Radio Free Asia. “And we only see the mass transfer of Uyghur laborers to other parts of China at this time.”

The analyst pointed out the widespread fear that refusal to participate would lead to detention in a brutal “re-education” camp operated by the regime. As has been the case since the founding of the People’s Republic of China in 1949, fear of its excesses remains the state’s most powerful weapon in dealing with its subjects.

What, finally, of the U.S. administration’s response? It’s instructive to observe that the two very different U.N. bodies discussed here, the UNHRC and the WHO, have both been the target of unilateral actions by President Donald Trump. In 2018, pointing the finger at “Item Seven,” America deemed the U.N. Human Rights Council beyond redemption and withdrew from it, while last week, Trump announced that the United States would no longer fund the WHO, citing its collusion with the Chinese regime as the primary reason.

Sadly, while China is poised to continue its exploitation of the United Nations, Western countries have failed to produce a unified response. Trump has long been clear that his foreign policy disdains America’s established alliances — in that sense, he is more like his Democratic predecessor, Barack Obama, than the previous Republican incumbent, George W. Bush — so any future American measures against China will likely be imposed or lifted unilaterally. The spectacle of Western leaders coming together to address the Chinese Communist Party’s culpability for the coronavirus pandemic is not something that we can expect to see, much as we might wish otherwise.