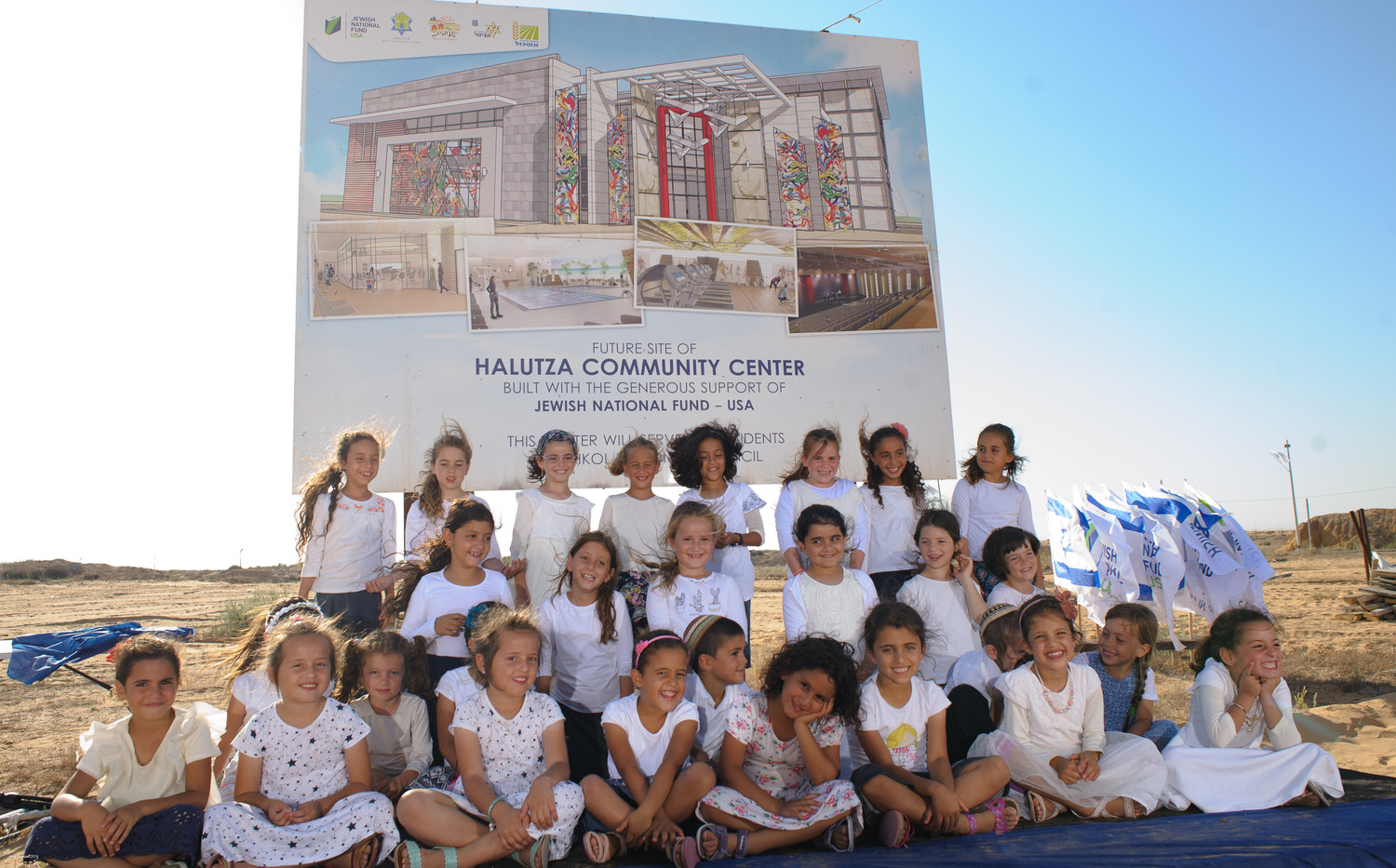 Children of Halutza in front of the site of the new Halutza Community Center.
NF-USA
By Megan E. Turner, JNS

Amid the billowing smoke across the nearby Gaza border, deep in Israel’s Negev, the new community of Shlomit laid a cornerstone for their future community center. The new structure will serve not only Shlomit, but the entire Eshkol region in southern Israel.

Seven hundred meters from Israel’s border with Egypt, Shlomit and the other budding communities of Halutza are defying the odds.

“Building a community center on the border here [with Gaza] says it all,” says Gadi Yarkoni, the mayor of Eshkol. “That’s how you show the enemy that you’ve won.”

Indeed, this show of life and vibrancy is Jewish National Fund-USA’s (JNF) goal in the face of trying times.

“Eleven years ago, we stood on a hill in this area looking out at nothing but sand, and a man with a bit of meshuganeh said that he will build three communities here. This is the outcome,” said Robinson, gesturing to the new houses abutting parks, playgrounds, greenhouses and the plot of land where the new community center will be.

JNF’s partner Halutza is a group of three communities headed by that “meshuganeh,” Rabbi Eli Adler. It’s made up primarily of former Gush Katif residents who were evacuated from their homes during the 2005 disengagement from Gaza. They rebuilt their lives in this uninhabited desert. After 10 years of hard work, Shlomit is driving change in the region, showing that growth and development are possible in even the remote Negev.

Tzvi Yehuda Halevi, 31, a soft-spoken father of four, commutes three hours to work in central Israel every day. But participation in the community is second nature to him and his family. “We wanted to take part in a mission to give back to the Israeli people and to continue to settle our land.”

The community center groundbreaking is important — not just as a sign of endurance, but as a critical source of services for the entire region. It will include classrooms and communal spaces, and provide learning opportunities, extracurricular activities and community events for all the region’s residents.

The event made a poignant statement, according to those involved, one that echoes throughout the region as terrorists continue to try to smoke Israelis out — literally.

“The growth and development we are witnessing in Halutza has a special emotional appeal for American Jews who support these efforts,” says Robinson. “It is also a loud and clear symbol that says, ‘We are here to stay, and we will continue to blossom'."