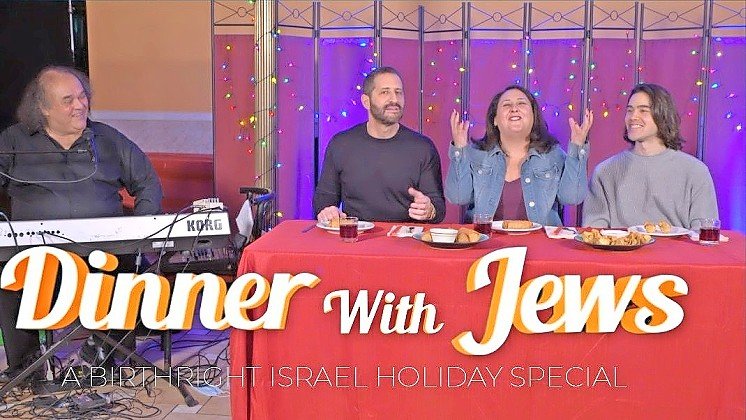 With Birthright travelers grounded during the pandemic, Birthright Israel Labs’ Content Studio began taking the trip digital. One of its first productions, “Dinner With Jews: A Birthright Israel Holiday Special,” explores why Jews eat Chinese food on Christmas through the perspective of three comics.
By David Isaac, JNS

Israel’s abandonment of its “red list” of countries from which foreign travelers were banned was welcome news to pro-Israel groups whose bread and butter is organizing trips to the Jewish state. They say the travel bans have complicated their mission to connect people to Israel — and that no amount of digital events speaker series can compare to “putting two feet on Israeli soil.”

Izzy Tapoohi, president and CEO of the Birthright Israel Foundation, said COVID and the resultant travel bans have had a “disastrous” effect on the ability of young Jews to defend both Judaism and Israel from the onslaught of anti-Semitism, especially on social media.

He estimates that in the last two years, 85,000 young adults were unable to make the 10-day Birthright trip due to the ongoing pandemic. The number impacted is actually larger, he said, as Birthright relies on returning participants to tell family and friends about the trip. “The way we recruit is by word-of-mouth,” explained Tapoohi. “Half of our registration success is based on the fact that a young adult who comes back from Israel is the best marketing tool we have.”

Pamela Fertel Weinstein, Birthright’s vice president of marketing and public relations, agreed: “They’re not going to provide what we call the ‘Birthright bounce’ — that all of a sudden people around them start to go to Israel because they’re seeing firsthand from their child, their grandchild, their sister, their cousin, how great it is, and they want to be part of that.”

“These are generations — years of participants — that are missing out, and the Jewish community and Israel is missing out if they don’t get to go,” she said.

She fears that if pandemic restrictions continue, “we’ll lose these young Jews. They’re going to age out or going to graduate college, and start a job and not be able to take the time to go, and that connection that we know is forged will not happen.”

Nevertheless, Birthright’s Fertel Weinstein is optimistic. She said she had accompanied trips that Birthright managed to squeeze into Israel in August before the borders tightened up again and saw that the participants were even more grateful and appreciative than usual.

“It was a heightened sense of ‘now more than ever, I am so glad to be here, so glad to feel part of a community’,” Weinstein said.

With Israel’s decision to scrap its “red list,” Birthright announced a winter round of trips and aims to bring 30 groups in February.