HEROIC WOMEN OF THE HOLOCAUST 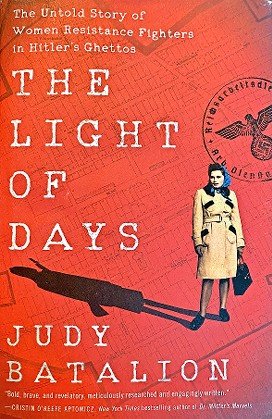 In July 1943, Renia Kukielka boarded a train from Warsaw to Bedzin with 22 false visas sewn into her skirt. During the inspection, she “bravely opened her packs,” maintaining eye contact.

“They searched inside them like chickens pecking in the sand,” she recalled in her memoir. This was only a few weeks before the Nazi liquidation of the ghetto in Bedzin, known as the “Jerusalem of Zaglembie,” and the outbreak of armed resistance on the third of August, 78 years ago this month.

Inspired by the courage of Jewish women who defied the Nazis, Judy Batalion has transformed their testimony and memoirs into a powerful, heart-wrenching and enthralling narrative that probes acts of resistance during the Holocaust and rewrites women into the central acts of heroism.

Batalion, a grandchild of Holocaust survivors, grew up learning about the partisan and poet Hannah Senesh who returned from Israel to aid Jews in Nazi-occupied Hungary. Batalion uncovered dozens of other intrepid women who dared to fight to save their fellow Jews. Steven Spielberg optioned movie rights several years ago.

Batalion focuses particularly on kashariyot (connectors), a word derived from the Hebrew kesher or connection). These were young female couriers who covertly delivered newspapers (hidden in their braids) or a gun (baked inside of bread) to empower Jewish resistance movements. Resistance also involved openly fighting with and killing Nazis. Their risk-taking often emerged from networks of mutual support that pre-date the war, notably youth groups such as Freedom (Dror) and Young Guard (Hashomer Hatzair).

Building on 30 years of academic scholarship, “The Light of Days: The Untold Story of Women Resistance Fighters in Hitler’s Ghettos” brings to life over two dozen ferocious Jewish women among the more than 100 who fought in the Warsaw and Bedzin Ghetto Uprisings and among the over 3,000 Jewish women in the partisans.

Batalion reconstructs the incredible trajectory of Renia from a 14-year old Jewish girl studying stenography in the shtetl of Jedrzejow to a resourceful courier in the Jewish underground. Forced into the ghetto with her six siblings, she was an eyewitness to Gestapo brutality.

“They were always bloodthirsty,” she remembered.

In late August 1942, the “great deportations” in Poland accelerated, and Renia’s parents Moshe and Leah made the choice to go into hiding separate from their older children. “No matter what,” Moshe told her, “promise me you will always stay Jewish.” Batalion presents this affirmation of faith as a form of resistance.

After a brief time in a Nazi labor camp with her brother Aaron, Renia discovered that the female workers were to be deported. “Renia had already defied the Nazi regime by smuggling, hiding, scheming and running-now began her chapter of disguise,” Batalion writes.

Educated in a Polish school, as many Jewish girls were, she was fluent in the Polish language. Renia had green eyes and light brown hair, which gave her the advantage of looking like a Gentile. Yet her subterfuge also involved tremendous risk. At one point Renia jumped from a train to avoid detection. Using fake documents she worked briefly as a housekeeper, before joining her older sister Sarah in the Bedzin resistance movement.

Few narratives of the Holocaust address the torture of Jewish women in the hands of the Gestapo, nor the ruses they used to successfully escape. In the Myslowice prison, Renia endured horrific beatings, red hot metal pins shoved under her fingernails, as well as extreme hunger and insects crawling on her skin. Batalion calls it a “factory line of torture,” reminding us that Renia (and other Jewish couriers) had to maintain the pretense at all times that they were not Jewish.

In one of the more remarkable episodes, Renia decides to trust a German guard to mail a letter to Zivia Lubetkin, the highest-ranking woman in the command of the Warsaw Ghetto Uprising, seeking funds to bribe the guards and to engineer her escape. “Zivia” became the secret code name for the resistance movement in Poland.

Intertwined with Renia’s journey are the struggles of many other heroic women in Warsaw, Vilna and Auschwitz. Many of these young fighters, like Chajka Klinger of Bedzin, were raised in poor Hassidic households. Chajka helped organize educational and theatrical programs for youth, such as Purim plays, then began taking lessons on how to shoot Nazis. Despite being in a city “swarming with top-level Nazis,” Gusta Davidson “who’d grown up in an extremely religious family,” forged papers and resistance newsletters, smuggled rifles and other ammunition to the Krakow Fighting Pioneers. The courier Vladka Meed barely escaped detection in Warsaw when a Nazi commander pulled her out of line for a search, including of her shoes, where she had hidden a map of Treblinka. By passing as a Polish Catholic nurse in Auschwitz, Bela Hazan offered medicine to sick Jews and even permited a Chanukah gathering in the largest Nazi Death Camp.

Batalion hints at some of the ingredients that enabled their survival — their education, appearance and an “iron will” — yet also the shared purpose of the youth movement and its Zionist dream. Renia described the youth leaders of Bedzin’s underground as “visionaries who can see a future,” “talking and singing as if they were in a dream,” even in the worst of times.

When Hantze Plotnicka “spoke of the kibbutzim in Palestine, her face lit up.”

“At their peak,” Batalion writes, “these underground activities involved 2,000 youth and many took place at a nearby farm.” An important accomplishment of Batalion’s work is to show how early resistance activities and training were underway, as well as the leadership skills and strategic decision-making of young Jewish women who survive, like Chajka and Zivia, and those who don’t, like Frumka Plotniczki.

Batalion has written a touching and sweeping account that aims to change the ways we think about the range of defiant actions of the Jewish women. The title of her book derives from a poem — another form of resistance — written by a young girl in the Warsaw Ghetto: “Warsaw with a weeping face/with graves on street corners/Will outlive her enemies/Will see the light of days.”

Indeed, the women Batalion beautifully chronicles left a legacy that deserves to be remembered. In captivating pages, these “Heroines of the Holocaust” see the light of day.

Lori Weintrob is founding director of the Wagner College Holocaust Center and Professor of History, on Staten Island. She is co-chair of the international symposium “Heroines of the Holocaust” in June 2022, where Judy Batalion will be the keynote speaker. Contact: holocaust.center@wagner.edu.

Restating a truth: Jews are indiginous to Israel