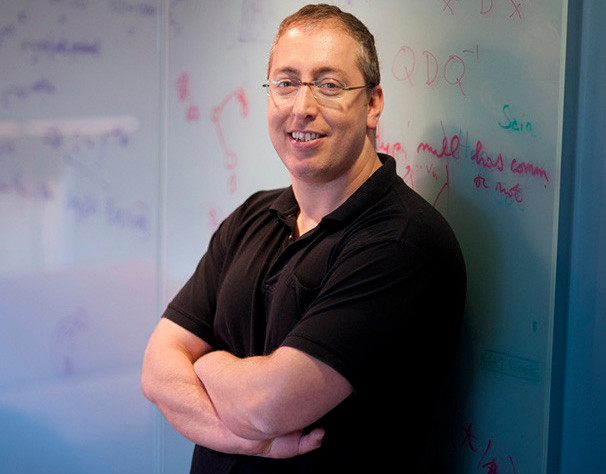 Baruch Barzel, a Postdoctoral Research Associate in the Barabasi Lab, created a new mathematical method for finding the links between protein interactions in cells.
Canaday, Brooks

Just after 4 pm on Aug. 14, 2003, a massive power outage struck the Northeastern United States, shutting down lights, phone service, air conditioning and mass transit for more than 55 million people, including those across the New York tri-state area. Most did not get their power back for two days. Others were left in the dark for as many as two weeks. This was the second largest power outage in world history, and the most significant blackout ever to hit North America.

In early 2015, a widespread epidemic of Zika fever, caused by the Zika virus in Brazil, spread to other parts of South and North America. It also affected several islands in the Pacific and Southeast Asia. In January 2016, the World Health Organization said the virus was likely to spread throughout most of the Americas by the end of the year. It was a scare that terrorized millions and had health workers the world over scrambling for secure methods of treatment.

What do the these calamities have in common. And how do we prevent such catastrophes from plaguing us in the future?

The answer lies in “network science,” and the man at the forefront of this monumental task for Israel is Dr. Baruch Barzel, a top researcher, physicist, applied mathematician and network specialist at Bar-Ilan University in Ramat Gan.

“Network science has greatly evolved in the past decade, and is currently a leading scientific field in the description of complex systems, which affect every aspect of our daily life,” says Barzel. “We inhabit a world more interconnected and interdependent than ever before. Today, an Ebola breakout in Africa can rapidly spread across the globe; one disaster on a highway or water source can break the flow of transportation or drinking water for an entire city. And an attack on computer infrastructure can cut off power, communications or finances for millions.”

Barzel and his team are working to uncover weaknesses in real world systems and find the best ways to make them more stable and resilient. This includes improving the stability of power grids, ecosystems, populations vulnerable to disease and more.

“It’s not impossible that maybe within the next five years, that just as today, after the headline news we get a weather forecast, we’re instead going to receive a forecast for diseases,” he says. “What strain of the flu will be coming to which cities in the world? And how can we prevent an outbreak? I think that within ten years, something like Ebola or Zika, which is now a global scare, is not going to be as scary when we know how to predict how they will spread, control their spread and be able to mitigate it online as the path penetrates social networking.”

The scientists in Barzel’s Network Science Impact Center create new mathematics, advanced big data techniques, sophisticated computational models, and high-powered computer simulations. And they incorporate their discoveries into automated frameworks so they can deploy their tools quickly for states, corporations and others aiming to avoid the next cascading collapse of their networks.

Barzel could easily lead his network science research anywhere in the world. Yet, he feels strongly committed to conducting his vital work in Israel.

“I believe that Israel has three primary advantages for this kind of endeavor,” he explains. “First of all, it’s the pertinence — these questions that we are addressing are actually at the heart of Israel’s many security platforms.

“Infrastructure today is much more than a convenience. Breaches through cyber-attacks that can cause a cascading failure are national security breaches. Is our infrastructure vulnerable? Can we detect the weak spots? Can we create incentives to create a more resilient infrastructure? The pertinence of this problem is crucial to the Israeli state-of-life. I believe that these kinds of problems should be solved here in Israel where there is true motivation to actually solve them. From there, we share our findings with the rest of the world.”

Barzel arrived at Bar-Ilan University two years ago. His Complex Networks Dynamics lab is in the Math department, although his background was in Physics. Barzel completed his Ph.D. at Hebrew University, then pursued his postdoctoral training at the Center for Complex Network Research at Northeastern University and at the Channing Division of Network Medicine at Harvard Medical School.