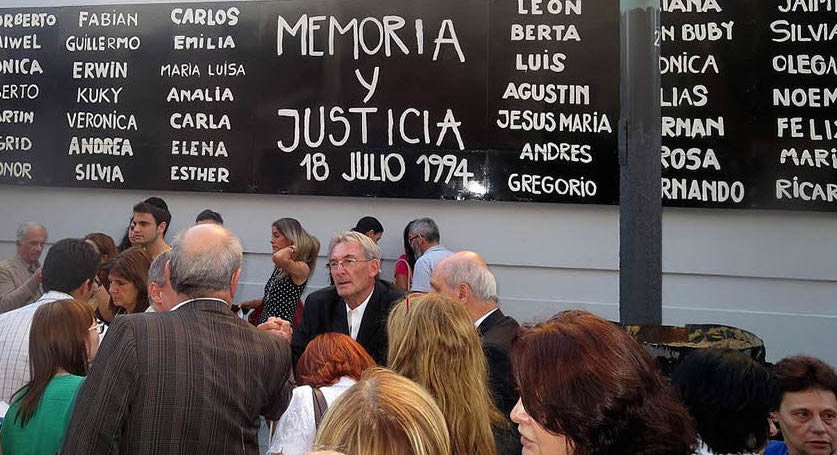 Every year on July 18, thousands gather to remember victims of the AMIA bombing. At one of these events, the names of the 85 who died in the 1994 bombing are listed. More than 300 were injured.
By Ben Cohen

That announcement, along with the further achievements of Nisman’s team that were to unfold over the next couple of years, marked a high point for the AMIA investigation.  The investigation had only recently been reconstituted by the late President Nestor Kirchner, following the ignominious collapse of a corruption-ridden probe launched by his predecessor, Carlos Menem. Argentine judge Rodolfo Canicoba Corra issued arrest warrants for the eight, and the following year, Interpol, the international law enforcement agency, published “red notices” — a wanted fugitive alert sent to all Interpol member states — for five of them, along with an additional one for Imad Mughniyeh, the chief of staff of the Lebanese terrorist organization Hezbollah.

As Argentina mourned the 25th anniversary of the AMIA atrocity last week, joined by Jewish organizations and democratic governments around the world, the prevailing question in the air was, “Where are they now?”

Two of the eight men named by the Argentine prosecutors in 2006 have since died.

Former Iranian President Ali Hashemi Rafsanjani, alleged to have called the meeting where the AMIA bombing was first conceived, left us in 2017, having amassed a personal fortune of $1 billion, and was described admiringly in his BBC obituary as a “pragmatic conservative” who “sought to encourage a rapprochement with the West and re-establish Iran as a regional power.”

Imad Mughniyeh of Hezbollah died as he lived — in a 2008 car bombing in Damascus, bringing to an end a terrorist career that included not just the AMIA bombing and the earlier bombing of the Israeli embassy in Buenos Aires in 1992, but also the 1983 suicide attacks on the U.S. embassy and U.S. Marine barracks in Beirut that took 350 lives.

As for the other five Interpol red-notice subjects, they are alive and well, and have globe-trotted extensively, visiting NATO member Turkey as well as Qatar, Pakistan, Oman, Brazil and 15 other countries, the great majority of whom have full diplomatic relations with the United States, the European Union and Argentina itself.

The bottom line, then, remains the same as it was on July 19, 1994, one day after the AMIA bombing, when the center of Buenos Aires was strewn with rubble and smoke, and emergency services were pulling lifeless bodies from the wreckage. Not a single person has been tried and convicted for their role in Latin America’s worst terrorist atrocity, in which 85 people died and more than 300 were wounded.

To add insult to that profound injury, the one individual whose integrity and dedication were never in doubt — federal prosecutor Nisman — was assassinated in 2015, a few hours before he was due to an unveil a complaint against former President Cristina Fernández de Kirchner and her key aides for reaching an underhanded agreement with Iran that would have exonerated the AMIA executioners. Like Velayati, Kirchner — who misrepresented Nisman’s death as a suicide, and who may have even been involved in his murder — has remained in politics, protected from the law by parliamentary immunity. She is presently running for vice president on a ticket led by her former chief of staff, Alberto Fernandez.

This is the background against which Argentina marks this most significant of all the AMIA anniversaries thus far.

Politically, the most important consequence was the Argentine government’s blacklisting of Hezbollah — a “terrorist organization” that “continues to represent a current and active threat to national security and the integrity of the financial, economic order of the Argentine Republic.”

This decision was the centerpiece of a broader effort by Mauricio Macri, Argentina’s president, to lead a regional campaign against Hezbollah’s financial heft and political clout throughout Latin America. The Western hemisphere has been a vital source of funds for Hezbollah, much of it from cocaine trafficking in concert with senior Venezuelan military officers, as well as fake documents and other prizes essential to the functioning of a terrorist organization. As a result, Hezbollah has a head start of at least a decade over Macri’s counterterrorism initiative, but nevertheless there is renewed optimism that Argentina and its neighbors will begin to squeeze Hezbollah from their continent.

Equally, though, this burst of energy against Hezbollah and its Iranian sponsors could come to an abrupt halt if Macri loses his reelection bid in October.

Having presided over four years of bitter austerity policies, with inflation currently climbing at 51 percent annually, Macri’s popularity at home has collapsed. A government with Cristina Kirchner at its center is not inevitable, but polling over the last few months shows that Macri will have his work cut out for him if he is to win a second term in office.

Should Argentina decide to subject itself to Kirchner’s leadership again, it is unlikely that she will turn the country’s economy around. But what is certain is that Argentina will be saddled with a leadership that Western countries can never trust, in the most basic sense of that word, with counterterrorism strategy. If the core lesson of the AMIA bombing is to be finally applied, in the form of a concerted campaign to drive Iran and its proxies out of Latin America, then Macri needs to win in October.