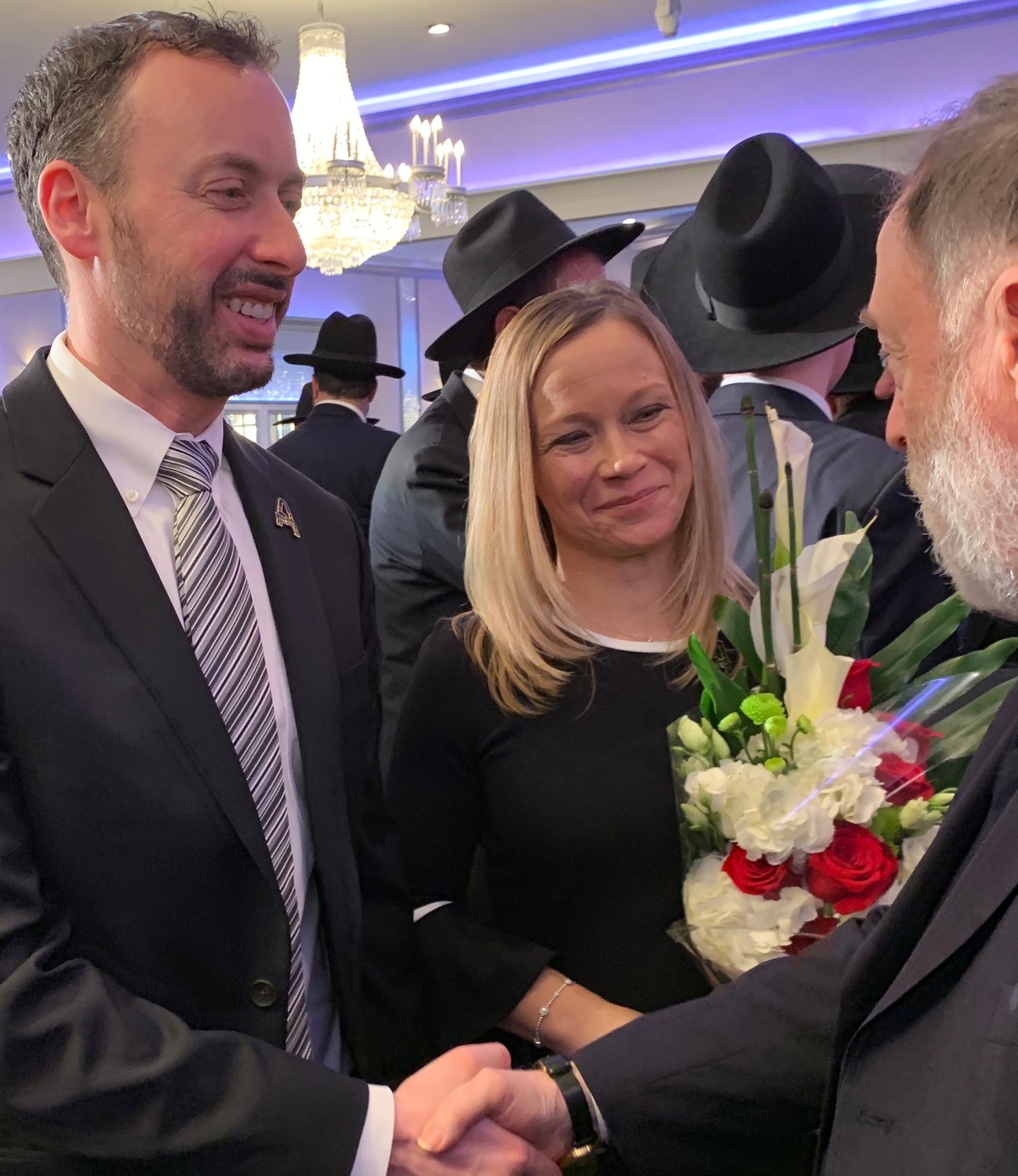 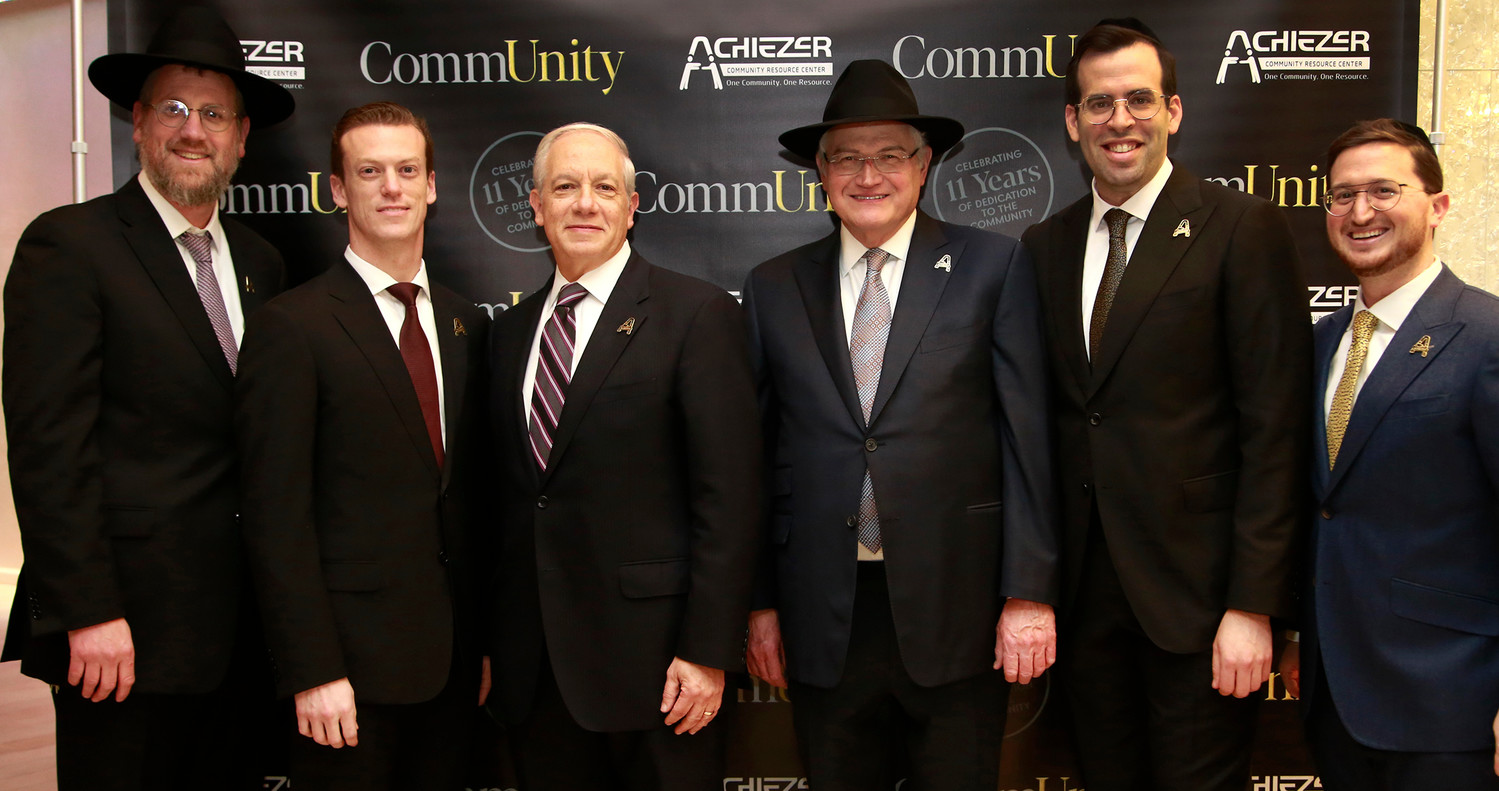 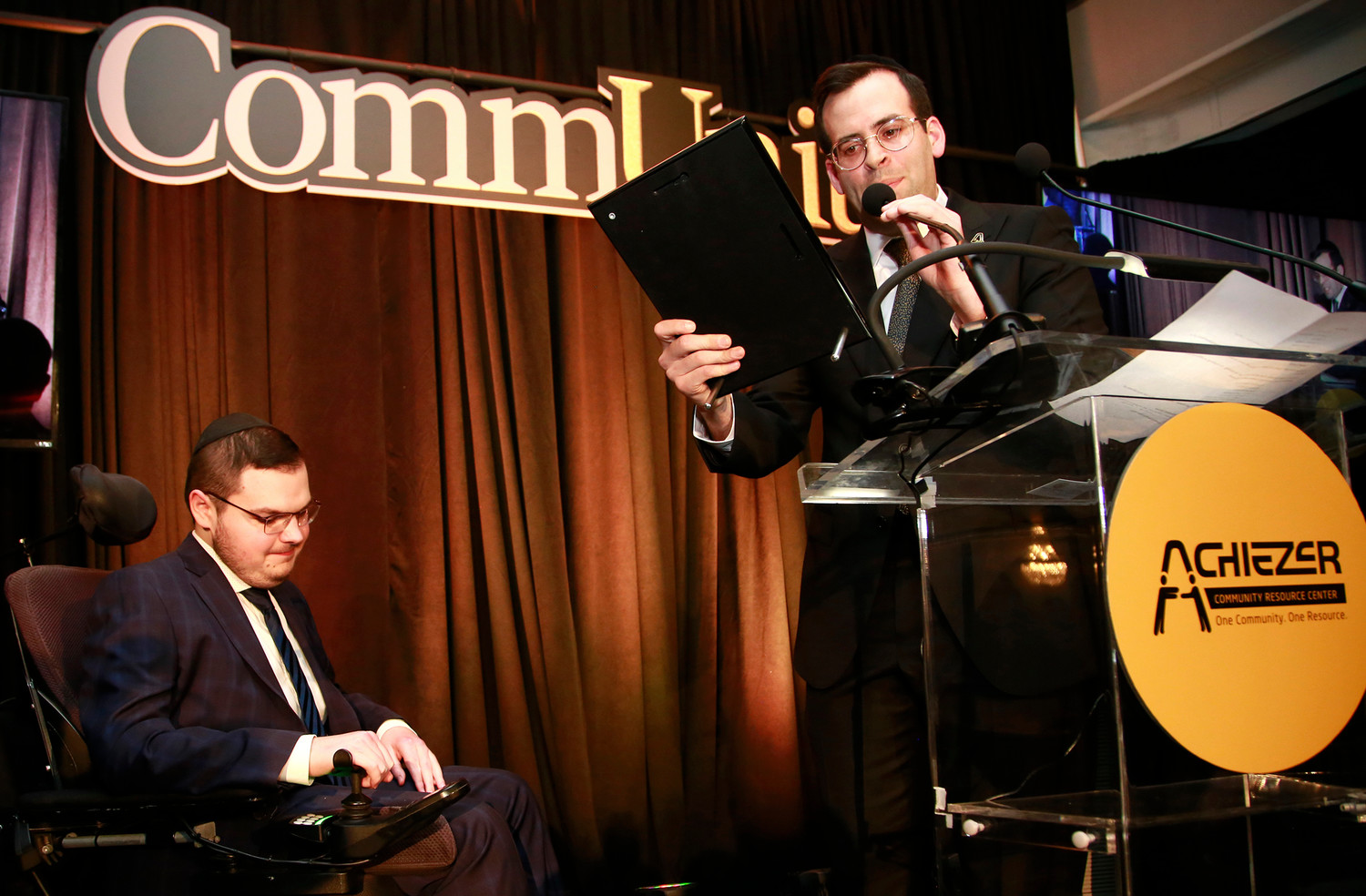 Rabbi Baruch Ber Bender presents a citation to Daniel Younger for his devotion to chased.
The Jewish Star / Sue Grieco 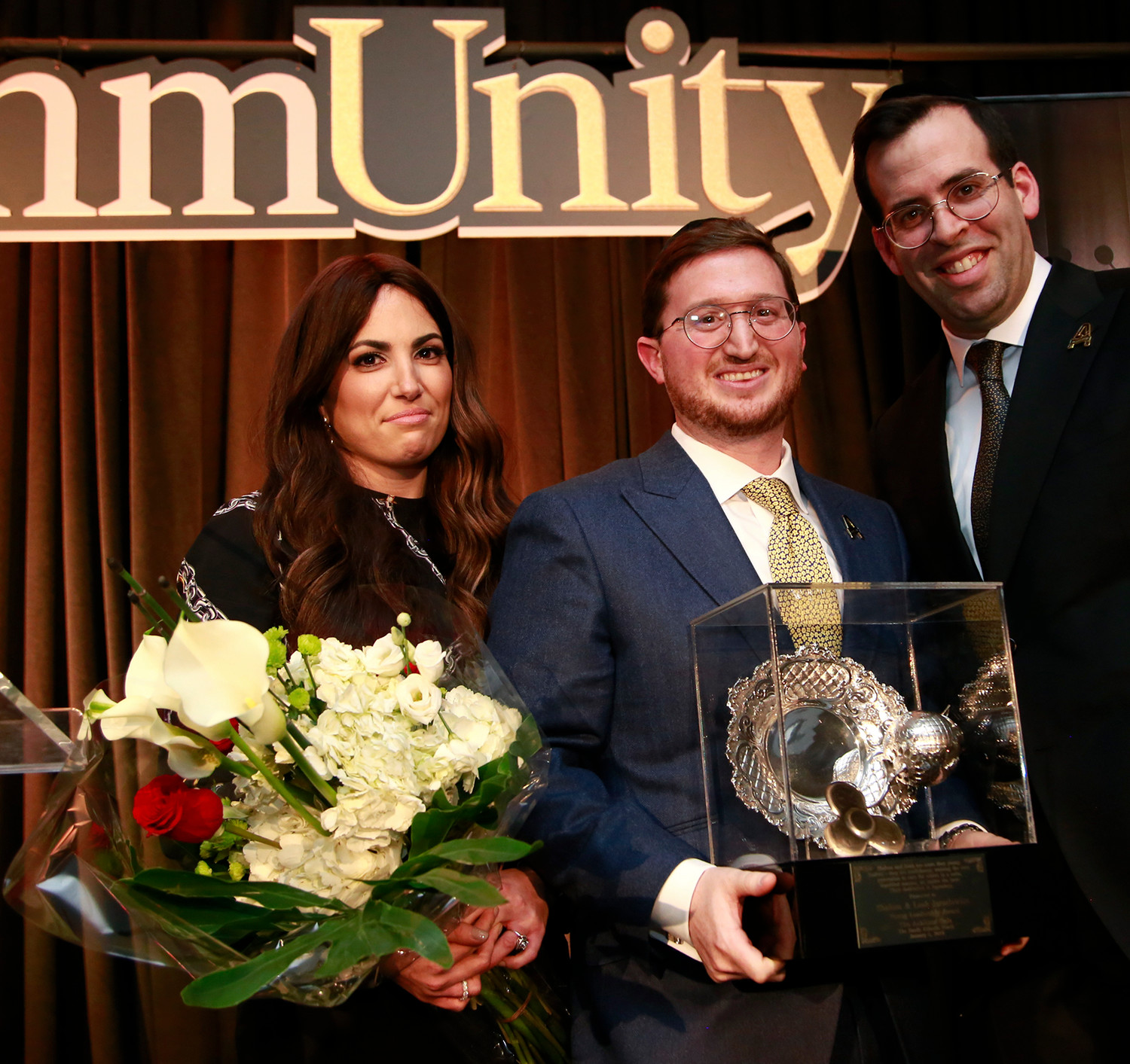 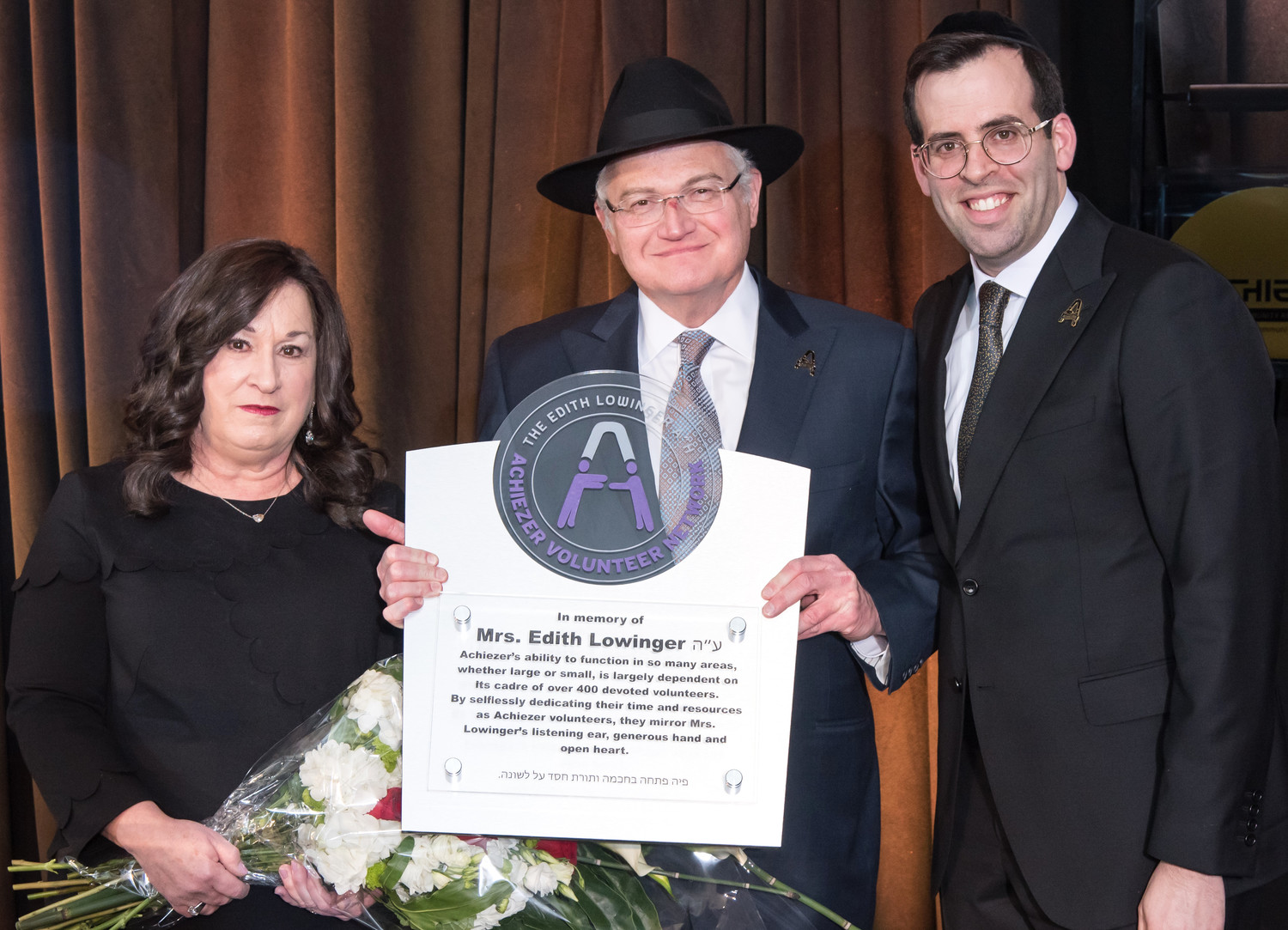 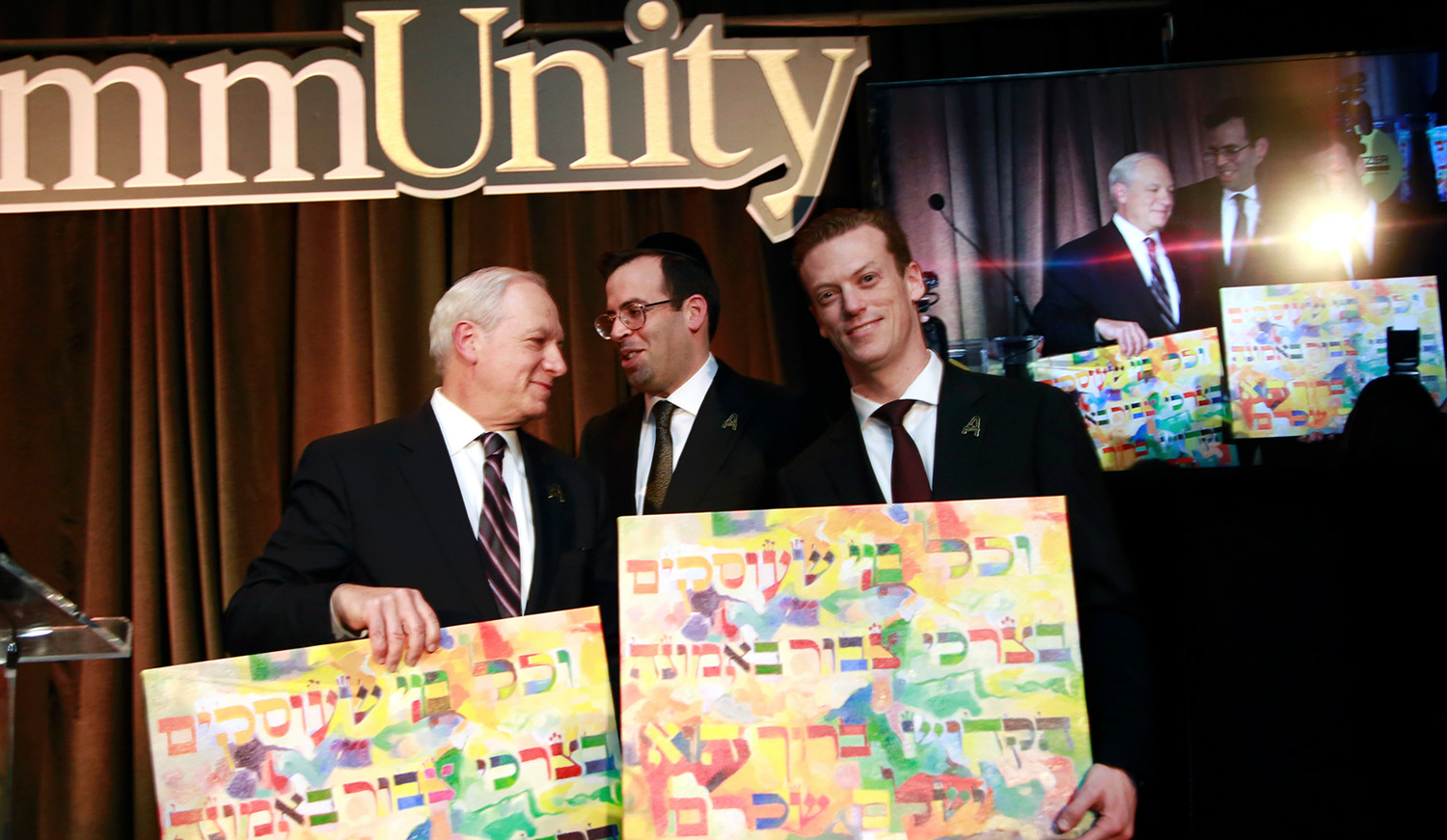 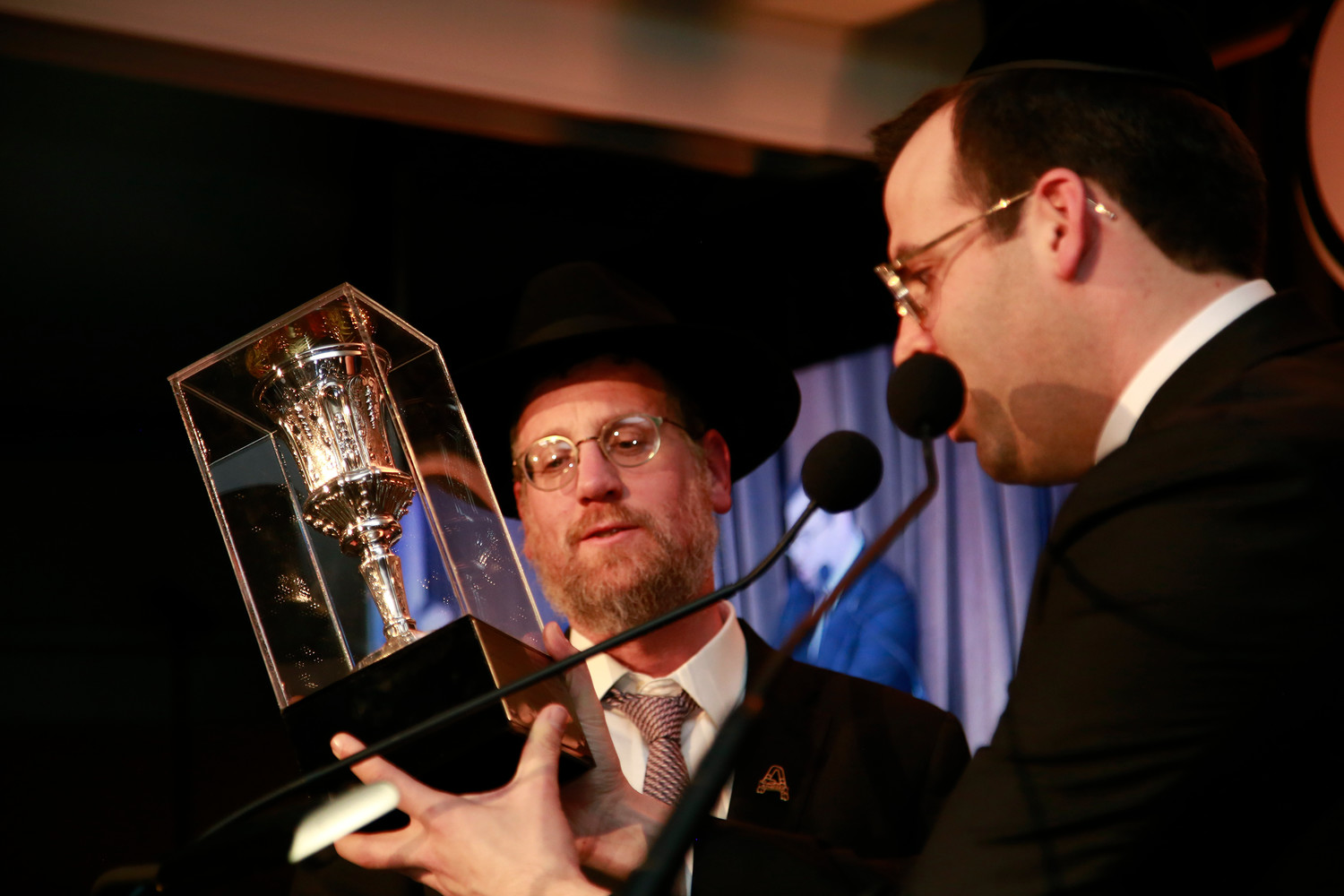 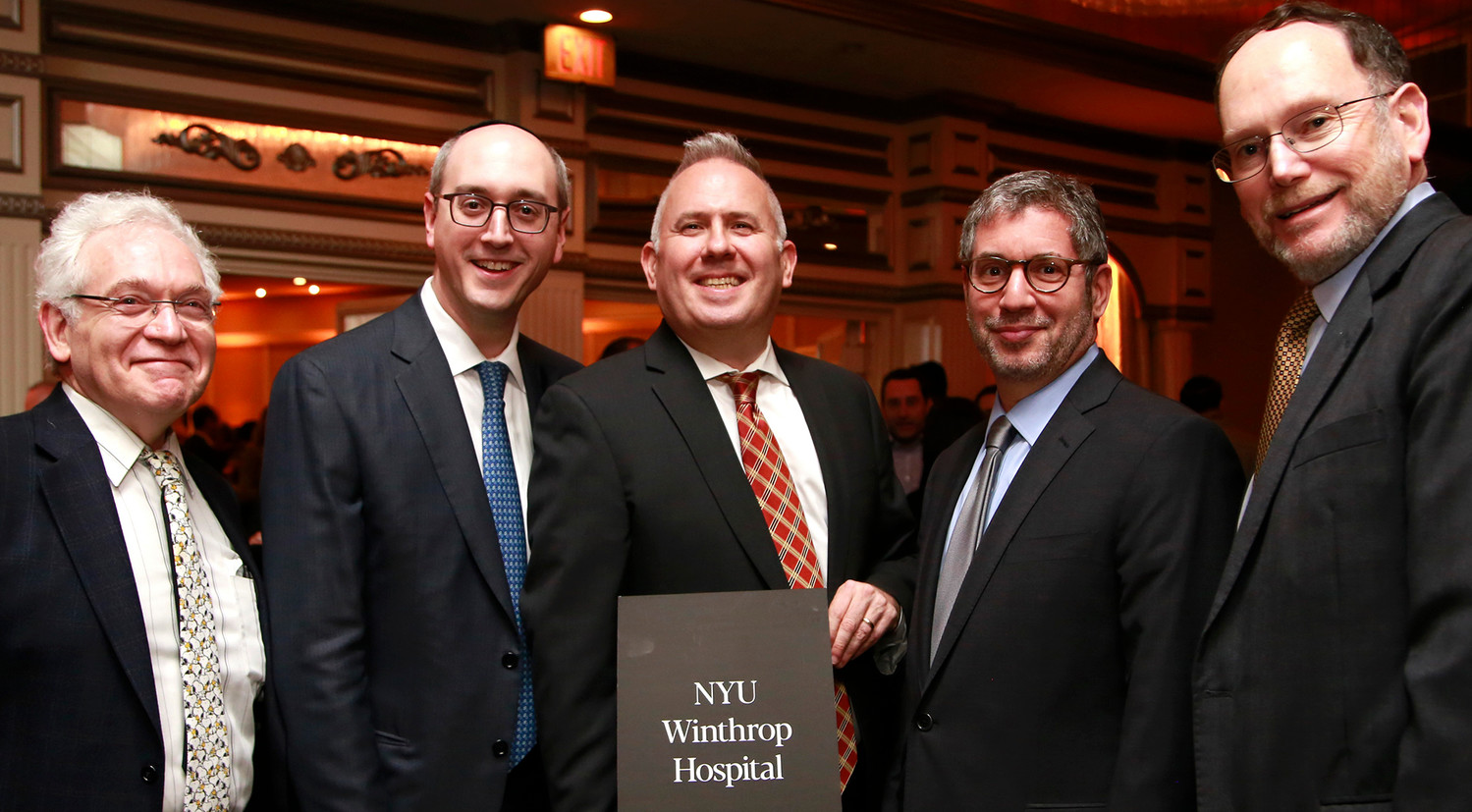 Among the staff of many hospitals and other medical institutions at the Achiezer gala were these representatives of NYU Winthrop Hospital — Dr. Martin Weinblatt, Dr. Tovia Marciano, Dr. Abraham Peller, Dr. Marc Adler and Bruce Cohn.
The Jewish Star / Sue Grieco 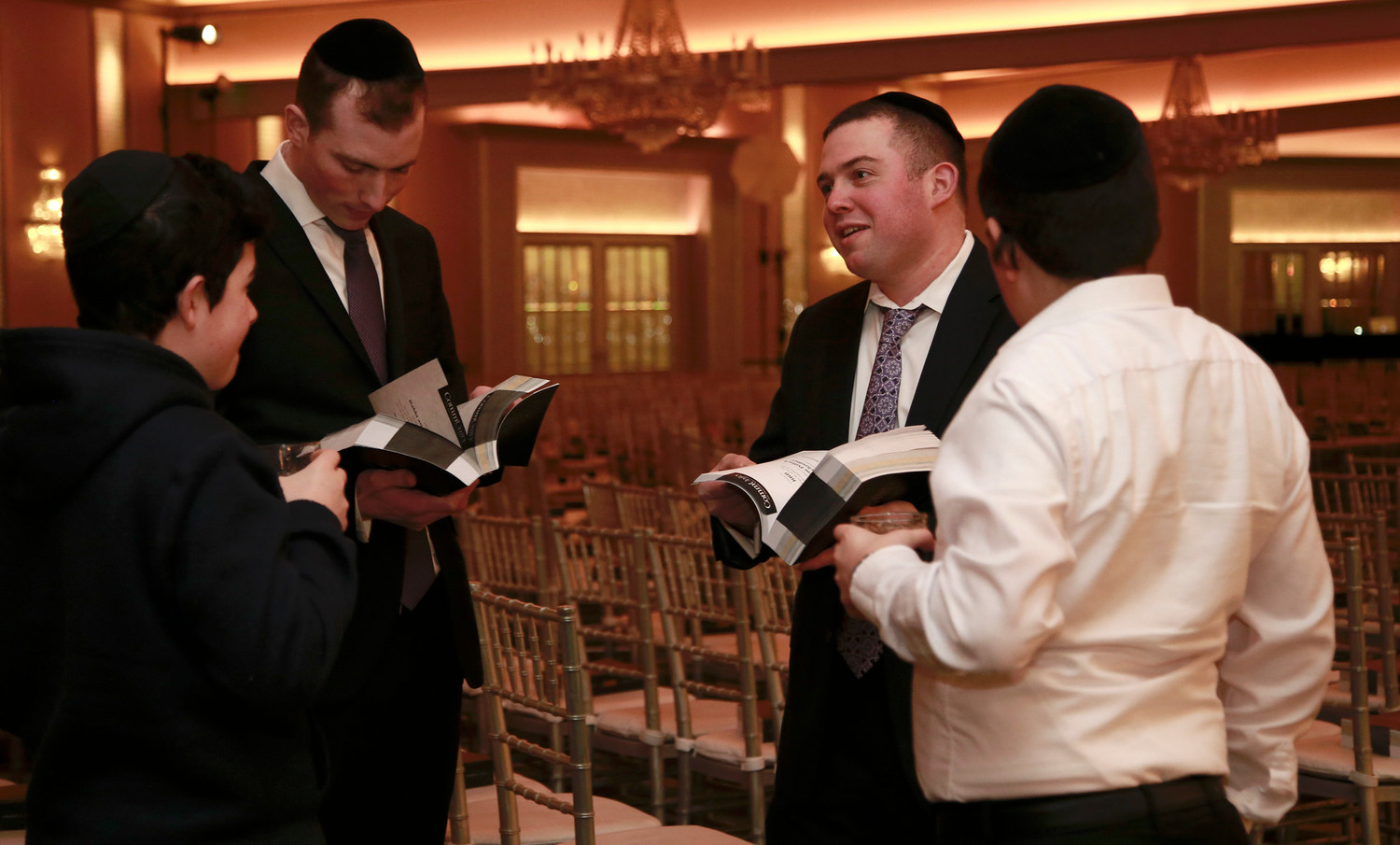 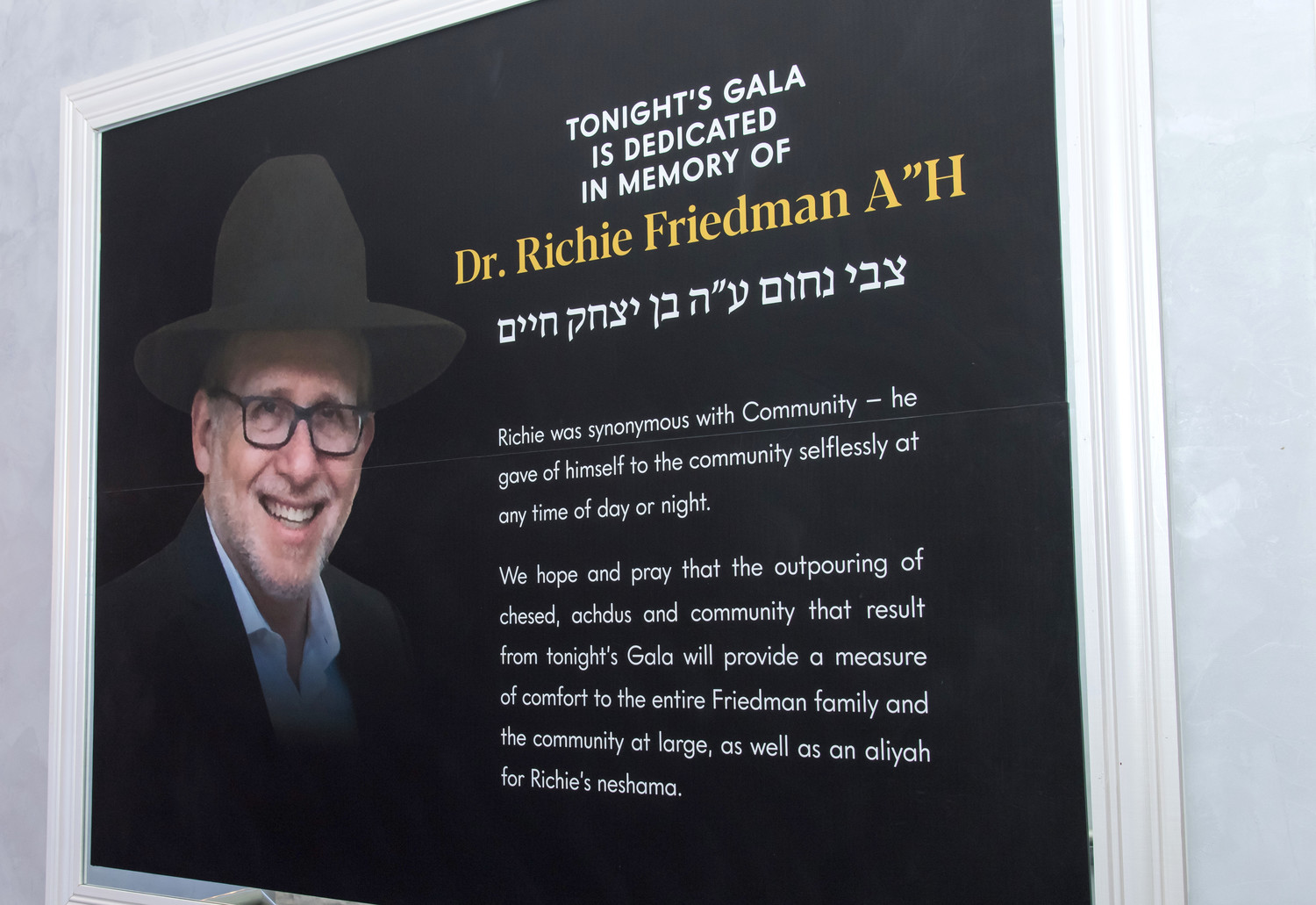 A poster honors Dr. Richie Friedman a”h, the medical director of Chevera Hatzalah in whose memory the Jan. 6 Achiezer gala was dedicated.
Achiezer 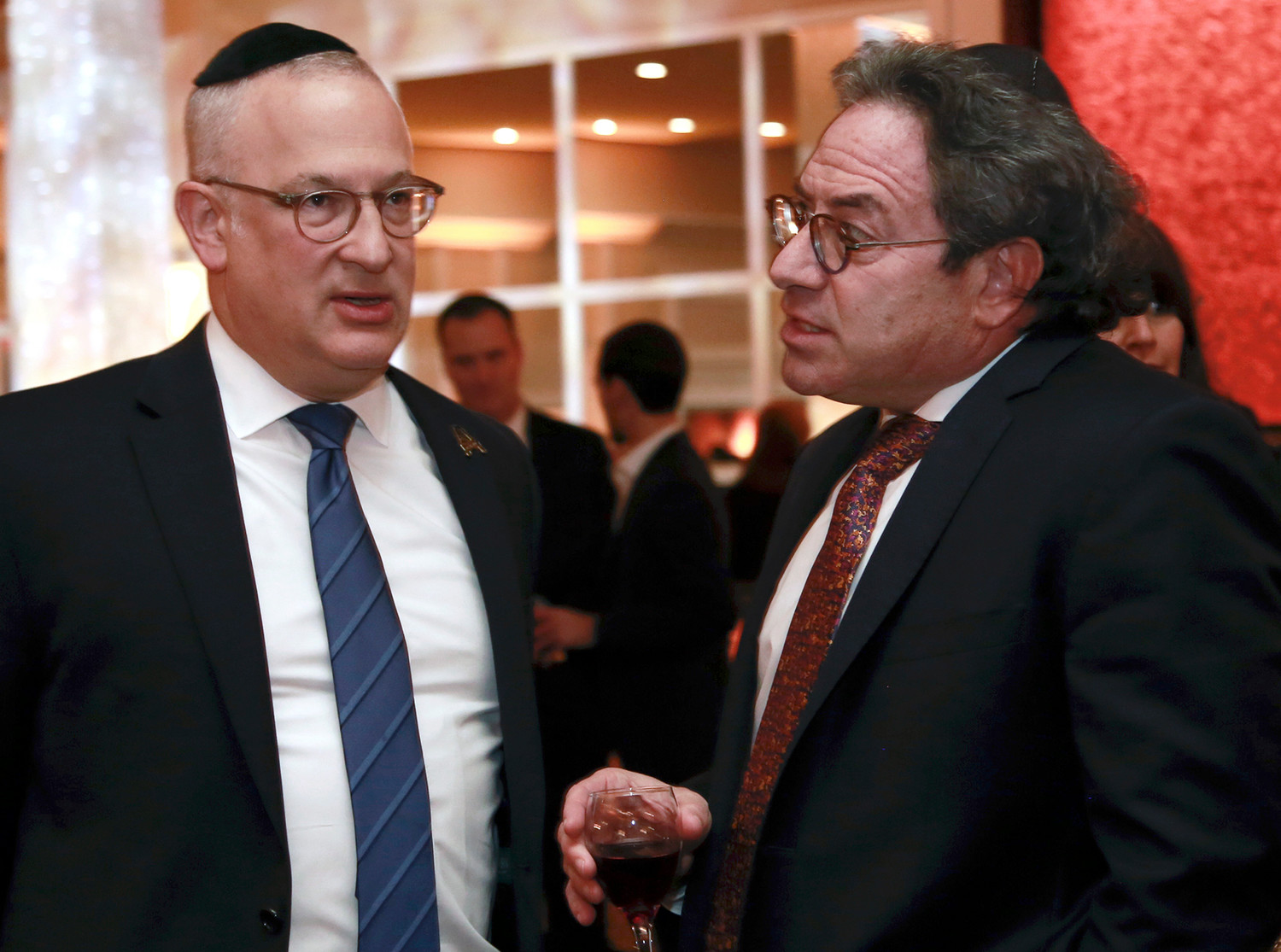 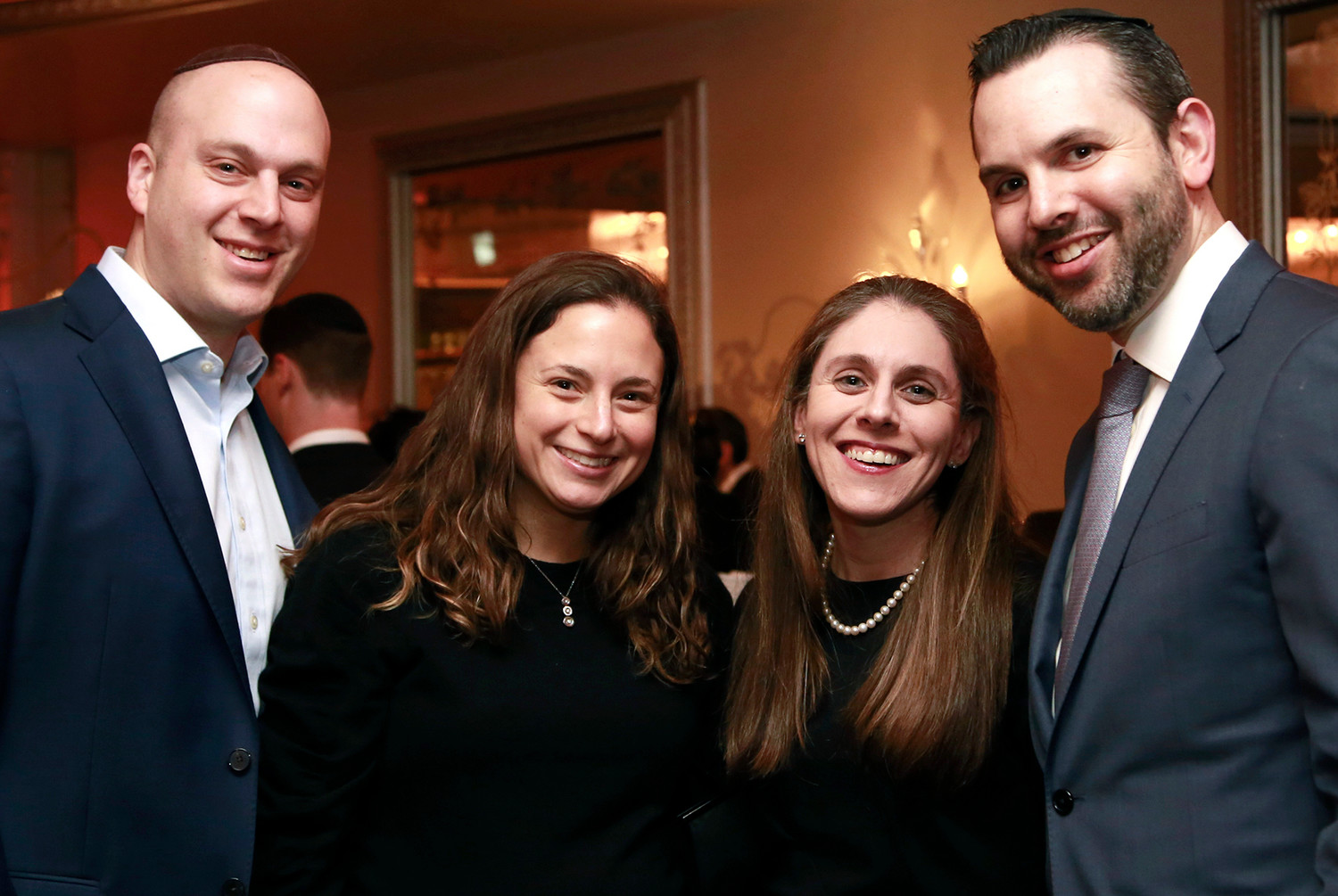 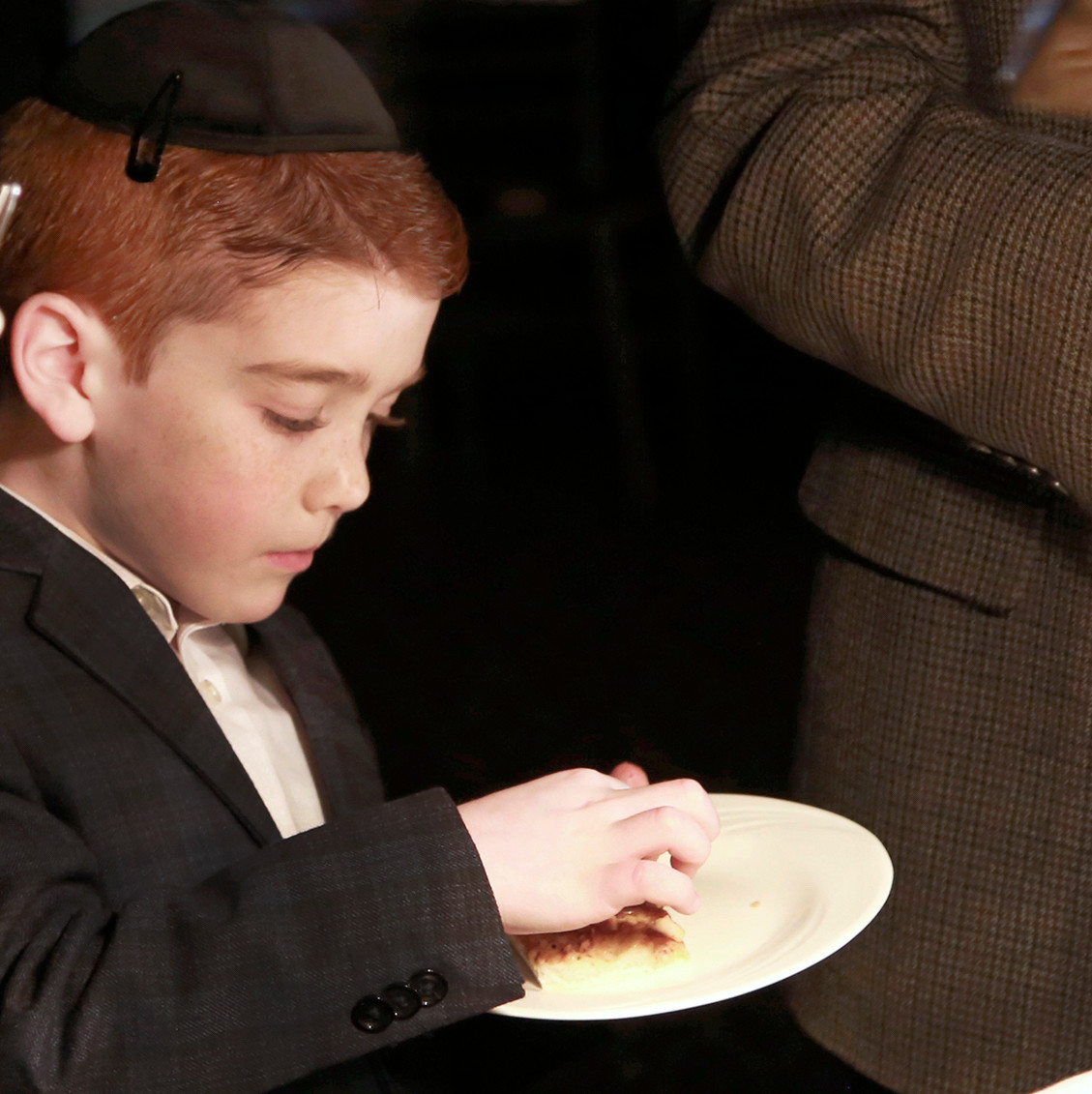 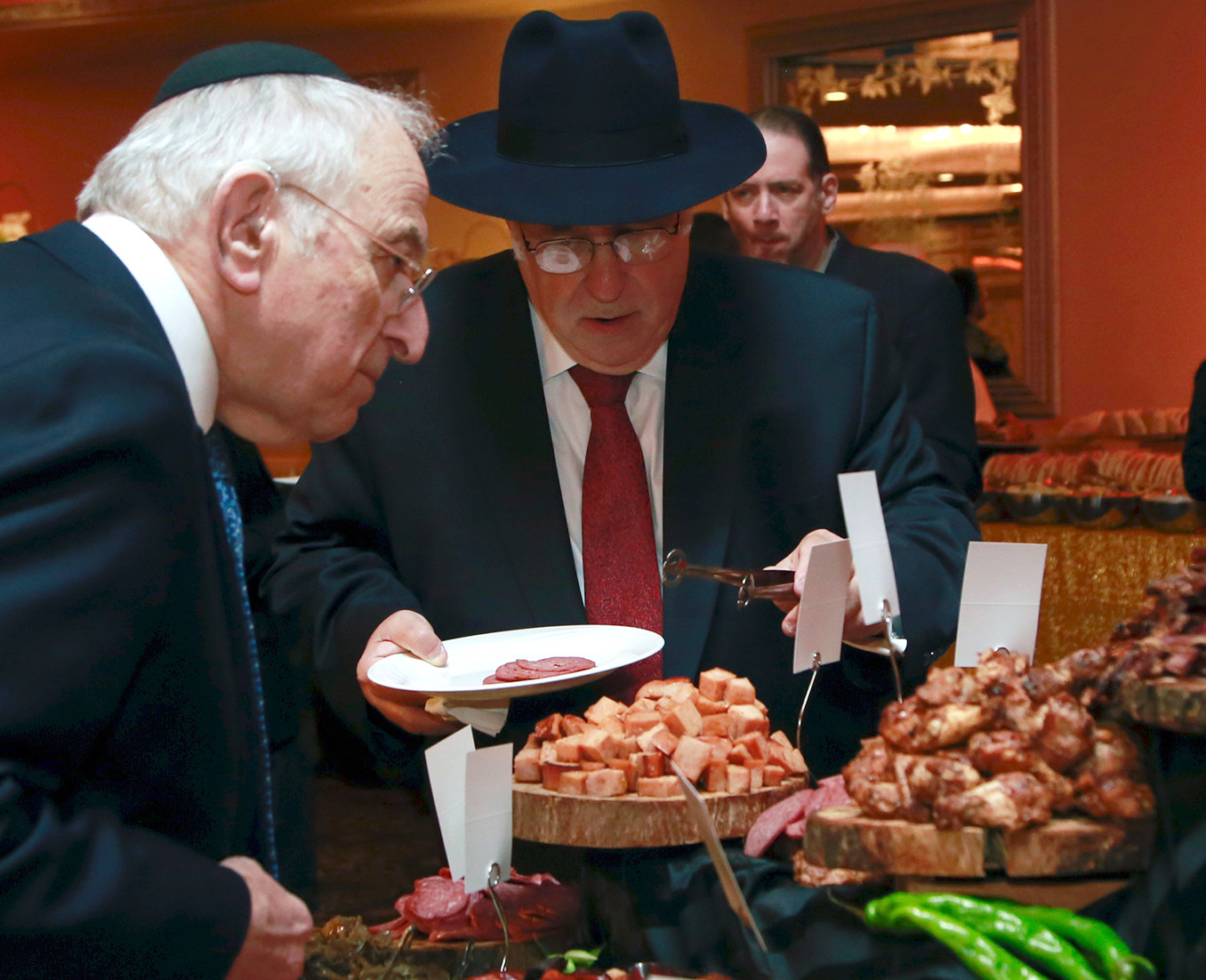 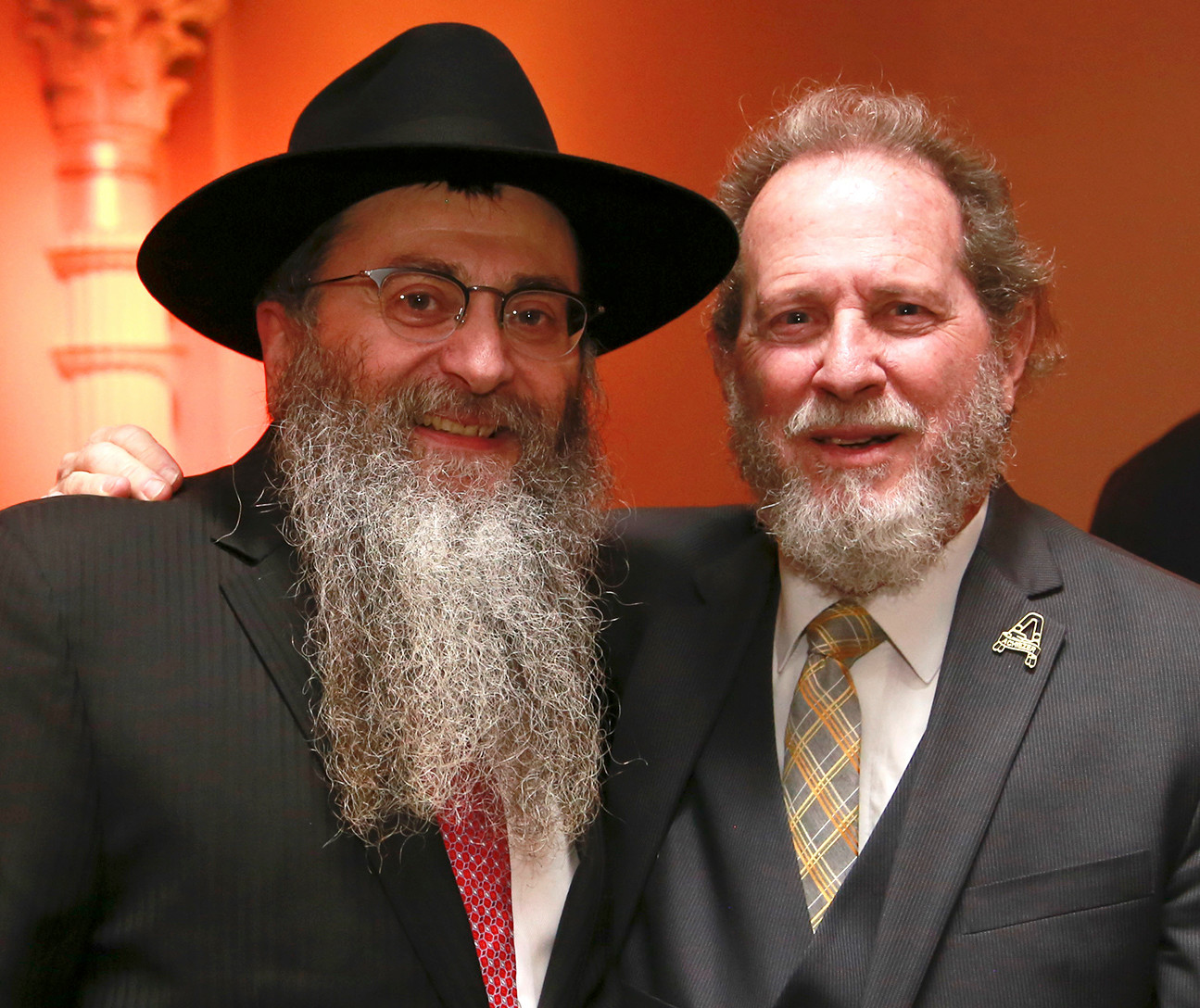 Rabbi Anchelle Perl of Chabad of Mineola and Achiezer board member Michael Krengel. 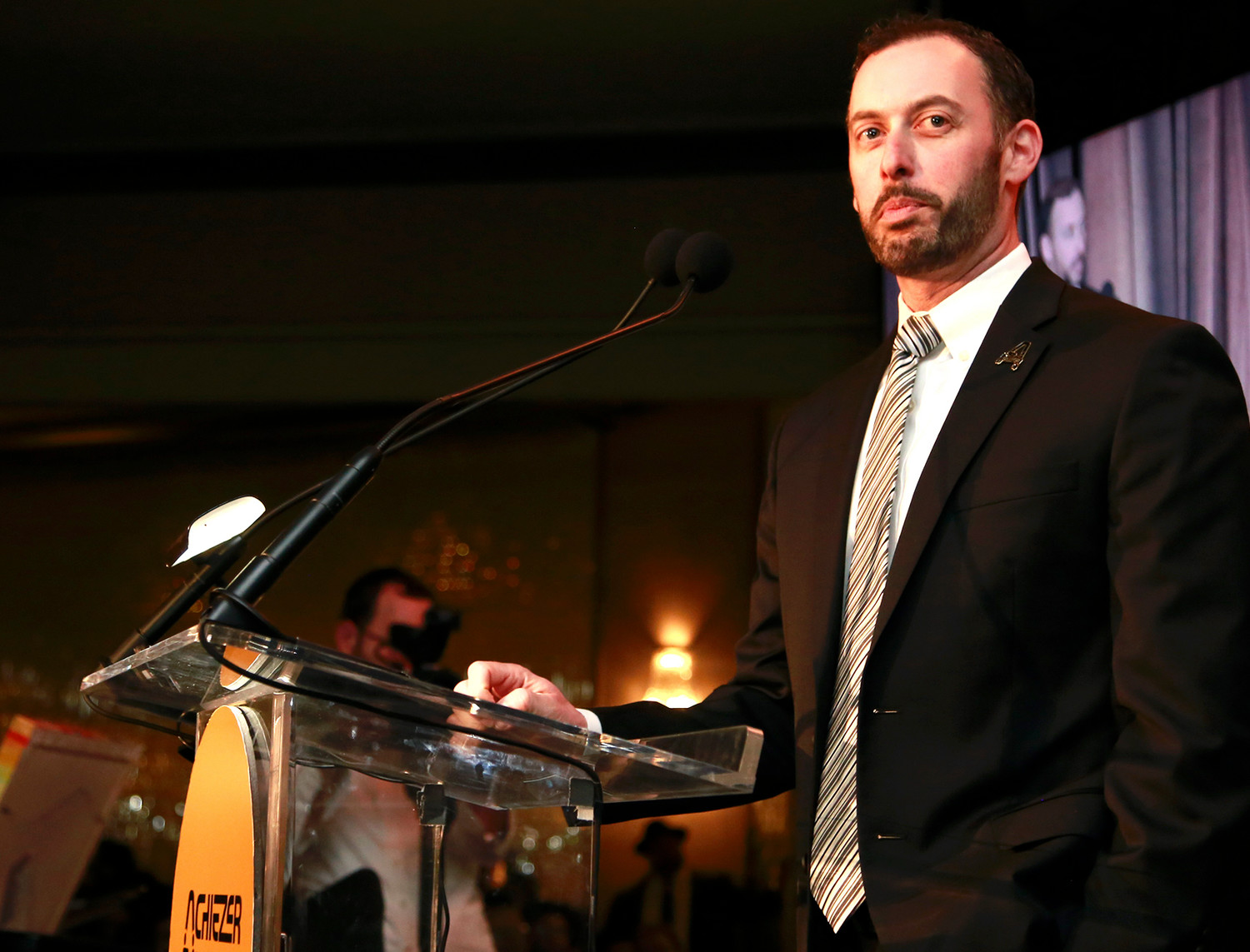 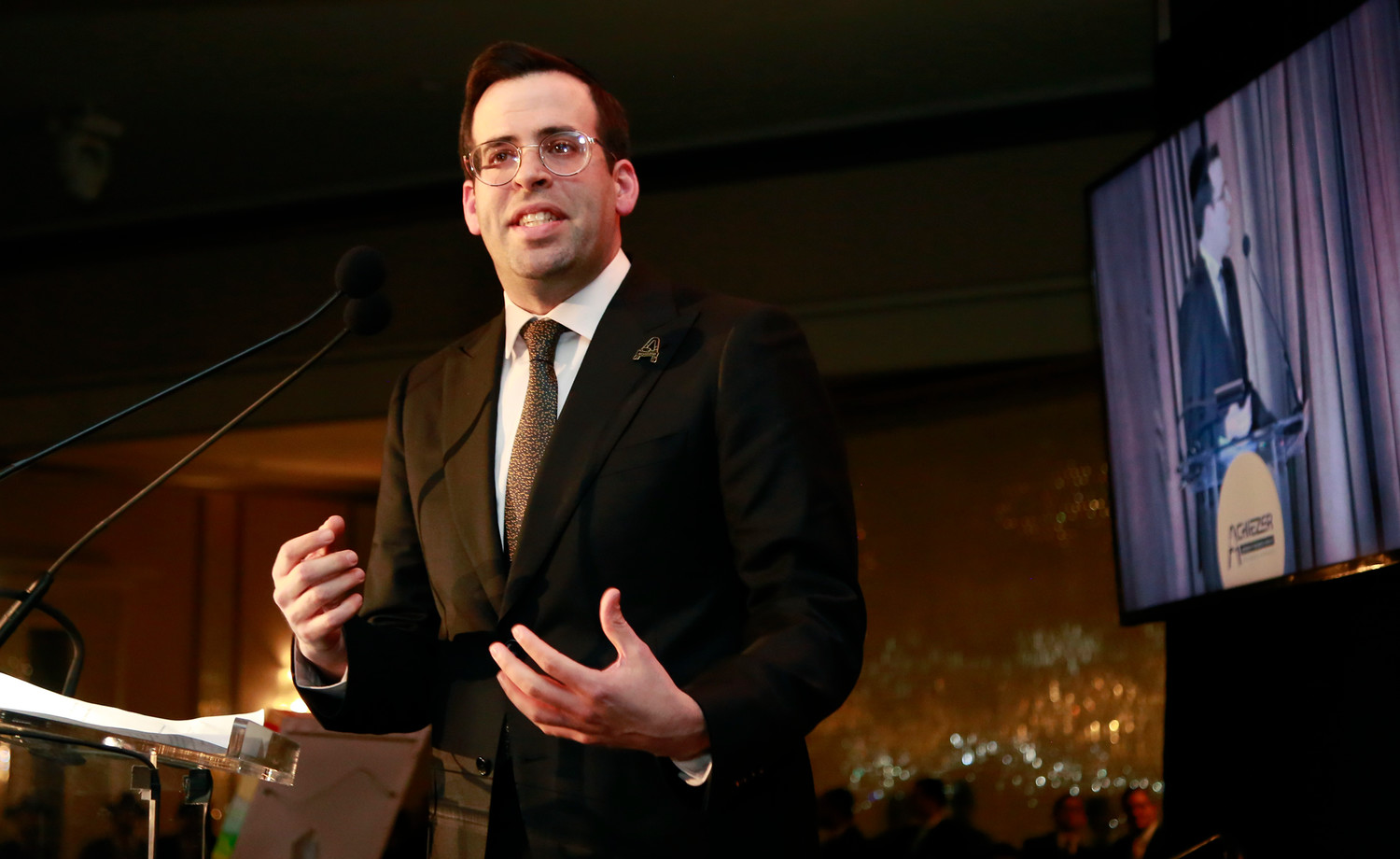 Achiezer, the Five Towns-based resource center, brought the community together on Sunday night for its 11th anniversary gala.

Under the banner “CommUnity,” the event drew an estimated 1,800 people to the Sands Atlantic Beach. It provided chizuk and funds to an organization that “spearheads and coordinates the many different aspects involved in assisting individuals and families confronted by challenges, from start to finish” — including medical, financial, emotional and more.

Attendees and speakers recounted individual stories of help provided, quietly and discreetly, by Achiezer, which coordinates with organizations that provide guidance and tangible assistance in many specific areas of need.

This year’s gala was dedicated in memory of Dr. Richie Friedman a”h, medical director of Chevera Hatzalah and a supporter of Achiezer, who was niftar after being hit by a car in while walking home from shul on motzei Shabbat.

With the installation of the Edith Lowinger A”H Achiezer Volunteer Network, the evening recognized a life devoted to others.

Michael Goldberg, executive director of Northwell Health’s Long Island Jewish Medical Center, was presented with the Man of the Year Award. He said that “when you talk about community and you talk about Achiezer, what’s really important is to recognize how much of an impact is being made not only here in this community — it’s being felt across the entire world.”

Goldberg said that while Northwell Health serves many communities — it operates 23 hospitals and more than 700 outpatient physician practices and, with 68,000 employees, is the largest private employer in the state — “one of the communities that we have really connected with” has been Five Towns and Far Rockaway, with President and CEO Michael Dowling meeting with leaders, including Rabbi Boruch Ber Bender, founder and president of Achiezer, to discern their needs.

Rabbi Bender said that Goldberg is “a hospital executive who runs a massive institution, but somehow, when there’s a particular person that’s in need, he’s there.”

Shalom and Leah Jaroslawicz received the Young Leadership Award; Dr. Martin Kessler and Dr. Ari Hoschander, partners in KH Plastic Surgery, were Excellence in Medicine Awardees; and Yossy and Miriam Lea Ungar were given the Pillars of Chesed Award.

A surprise honor was presented to Daniel Younger, who exemplifies Achiezer’s core value of giving service whenever and wherever it’s required (the Achiezer team is available 24/7). Confined to a wheelchair, he responded immediately when Achiezer sent out a text alert that several men were needed right away to provide kavod acharon.

“He was going to make sure that person was not going to be buried alone,” Rabbi Bender said, relating how Younger mobilized several friends and rode to the cemetery. Unable to do so himself, Younger asked that someone put dirt in his hand so he could complete the entire mitzvah.

His “devotion to chesed and his drive to help another Jew in need is truly inspirational,” Rabbi Bender said. “You are a complete and total inspiration to all of us.”