Not letting go: The anatomy of an Agunah 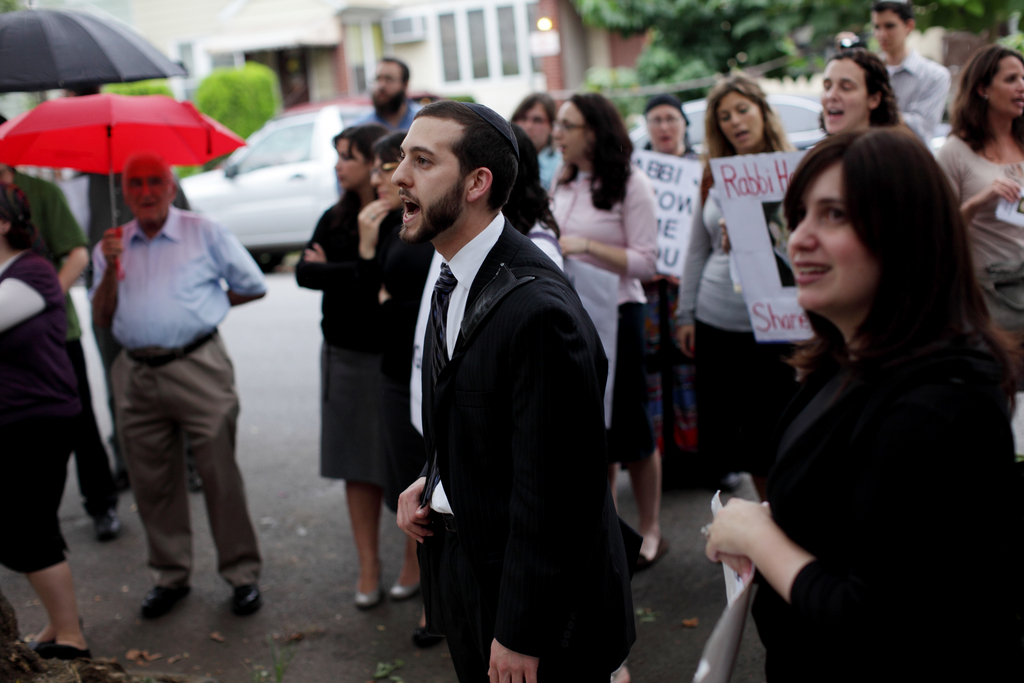 Rabbi Jeremy Stern, center, Executive Director of The Organization for the Resolution of Agunot, leads a rally to denounce Aharon Friedman who will not give his wife a get, despite the fact that they have already been granted a divorce in civil court, in Brooklyn, Wednesday, August 18, 2010.
Claudio Papapietro
By Michael Orbach

His name is Aharon Friedman, and he is refusing to give his ex-wife a get.

Activists blast Friedman, a high-profile lawyer for the House Ways and Means Committee, for withholding the religious document that would enable his ex-wife, Tamar Epstein, to remarry, making her an Agunah, or “chained woman. “But Friedman’s supporters maintain that is the last resort of a man desperate to maintain a relationship with his young daughter, and that the get is a so-called “nuclear” option in a messy divorce.

On Sunday, the Organization for the Resolution of Agunot, a group that works to facilitate the granting of gets from recalcitrant husbands, held a rally at Friedman’s apartment in Silver Spring, MD. According to Rabbi Jeremy Stern, the director of ORA, 300 people attended.

“Despite offers by the wife, which she’s put her name to and signed, rabbis have vouched on her behalf, the husband has not been willing to agree to anything,” Rabbi Stern said. The group has been working to persuade Friedman to give Epstein a get for several months but has been unsuccessful. The rally was the second one the group held for this case; the first took place in Brooklyn in August.

Among the attendees in Maryland was Rabbi Shmuly Herzfeld of Ohev Shalom, the National Synagogue in Washington, D.C.

“Aaron Friedman should give his wife a get immediately,” Rabbi Herzfelt wrote in an email to The Jewish Star. “I call upon the other rabbis in the area to ‘take a stand’ in this matter and to strongly condemn Aaron’s behavior.”

Epstein and Freidman were married in 2006, when Epstein was 22 and Friedman was 29. According to Epstein, the marriage was “rocky from the start,” but the couple had a daughter together in Maryland.

Friedman declined to speak to The Star. In 2008, Epstein moved back with her parents in Philadelphia. Friedman filed an emergency motion to get the couple’s daughter back. No immediate action was taken on the motion, but the couple agreed to go to the Baltimore Bet Din. Months passed, but the Bet Din didn’t come to a verdict and the case returned to a secular court where Epstein was granted custody.

Court documents provided to The Jewish Star show two parents engaged in a bitter custody dispute over their daughter.