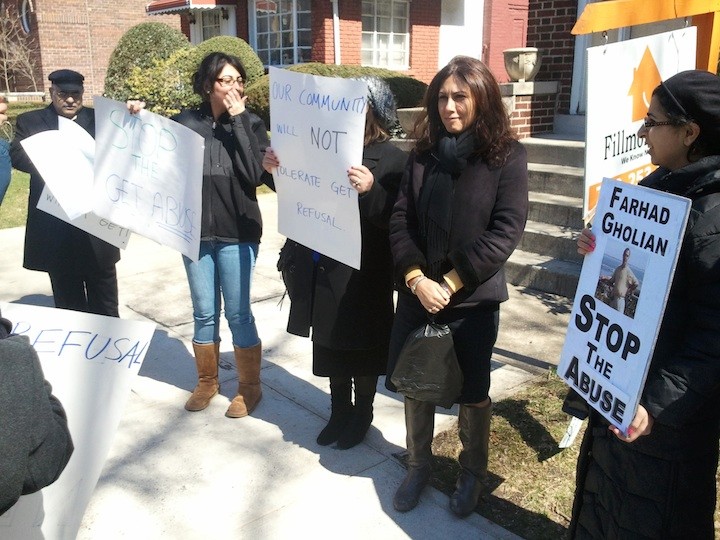 Kurt Flascher once marched with Rev. Martin Luther King, Jr. aiming to promote civil rights in the South. So when a Jewish organization called him about a protest rally in Borough Park on March 27, he offered them milk and cookies. But it was in jest, because the rally was outside his first-floor window, and the subject of the rally was Flascher himself.

Initially emerging from his apartment to observe the crowd, as it grew to 40 people, Flascher, 83, cursed at them and ran back inside. The protest was organized by Organization for the Resolution of Agunot (ORA), a nonprofit that seeks to resolve longstanding cases where a husband refuses to give his wife a get, the document of religious divorce.

“You’re a civil rights hypocrite. We’ve sent you letters and you’ve ignored them. The beit din has summoned you and we cannot stand by while a Jewish woman is being abused,” said ORA Executive Director Rabbi Jeremy Stern.

Flascher’s ex-wife Sara Ain, 64, requested her get from Kurt in 2000, and two years later, the Beit Din of Elizabeth issued a seruv against him for not responding to the beit din.

The rally attracted a few people in similar situations, including two women currently in the midst of their own agunah cases. “It makes me want to question my faith that nothing can be done to resolve this,” said one mother of three, who declined to provide her name.

“I think the community is too timid, because we cannot lay a finger on these men,” said Borough Park resident Shulamit Hawtof, a former agunah herself. A modern Orthodox resident in a largely Hasidic neighborhood, Hawtof lamented about the absence of Hasidim at the rally. “They only look after their own, but when you’ve been an agunah for 9 years, the experience touches you and you want to help.”

Although New York state law mandates that a plaintiff must remove all barriers to the spouse’s remarriage, the same burden is not placed on the defendant. “The defendant is not looking for a divorce, it’s the plaintiff who is asking for it,” said Asher White, an attorney who handles divorce cases in the Orthodox community.

Not letting go: The anatomy of an Agunah
Page 1 / 2
Report an inappropriate comment