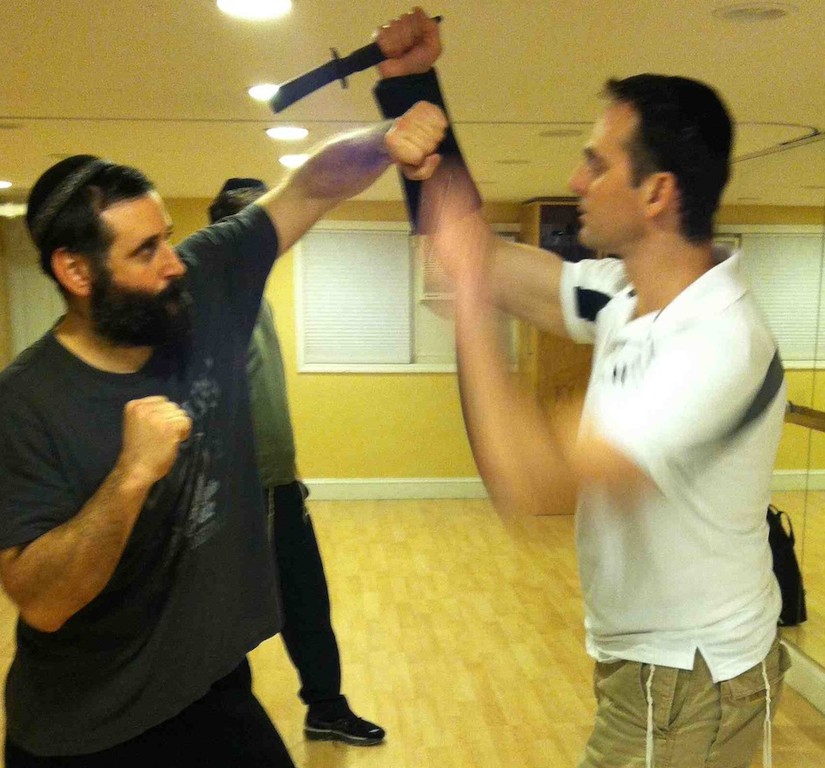 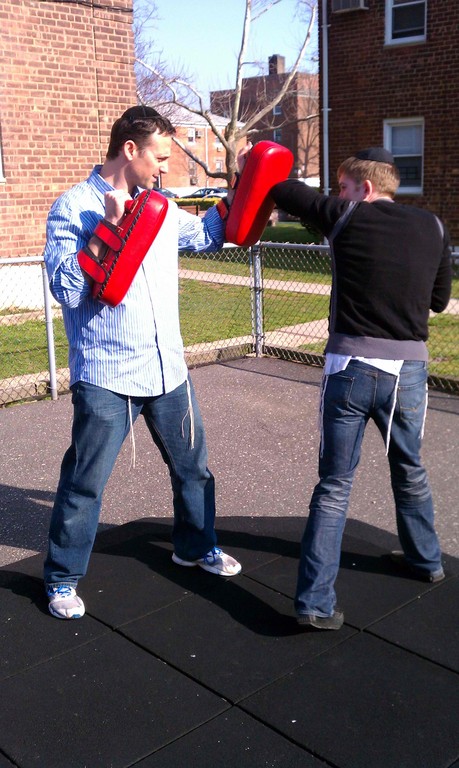 After years of training in various forms of self defense, Eilon Even-Esh found his calling two years ago when he targeted the needs of students who had been bullied. He deconstructed the incidents, giving them emotional and tactical tools and answers to their abuse.

Even-Esh is teaching Krav Maga twice a week in Woodmere for men to learn fitness and self defense skills.

Benjamin Wolf arranged the class and explained why with a dvar Torah. “A person must be a whole human being, a mensch, before he can be a proper vessel for Torah. That’s why the parshios of Bereishis and the beginning of Shmos, which teach midos and derech eretz, how to be a mensch, a whole person, precede the mitzvos between man and Hashem in the Torah. I am therefore working on no longer neglecting my health and fitness. Hopefully, that will make me a healthier ‘vessel’ for Torah.”

Wolf learns from 6 to 7 am, davens Shacharit at 7 at Aish Kodesh and participates in the Krav Maga class there from 7:45 to 8:45, then catches the 9:06 train to the city. “I tried to set it up at a time and location that’s so convenient to remove any excuse not to do it!” he told The Jewish Star.

For the last two years, Even-Esh has been teaching his unique martial arts classes, stressing the importance of fitness, tied to Torah values and focusing on the individual needs of the client. He has taught Krav Maga as an after school club sport at DRS Yeshiva High School in Woodmere, at Camp Mogen Avraham, bungalow colonies, hotel programs and in private lessons.

“Everyone learns differently and has a different personal history,” he said. “I try to teach exactly where the student wants or needs to go. Sometimes a person just wants to get in shape. Sometimes a person was bullied or mugged or even sexually assaulted. I teach first whatever is most relevant to a student. I tend to shun curriculum and traditional teaching pathways. Many relevant black belt techniques can be taught on day one, depending on the natural temperament and capabilities of the student.”

“A student who is being bullied may be attacked with ‘situation A’ one week and ‘situation B’ the next. I deconstruct those situations and show how to solve each instance.” He teaches techniques ‘relevant to their situation” then “big primary motor skills followed by the smaller details and reinforced with repetition.” He said that, “a working knowledge can be taught in one class” but stressed that it is not “mastery. This is a working knowledge of very simple and effective techniques.”

Crucial to his teaching is his integration of martial arts with Torah and midot. “First and foremost, I try to be an example. I try to show that a frum person can be cool, understanding and very physically competent. Midot are often times best taught by example. I also never give primacy to martial arts. Martial arts are at best a secondary or tertiary addendum to a Torah observant life. It is a way to enhance ones appreciation of Torah. To recharge one’s spiritual batteries by engaging in a healthy physical outlet.”

He said that he tries to merge spirituality of Judaism and the physicality of martial arts. Martial arts without Judaism is empty as is everything else in the world, he said.

Even-Esh was born in Haifa, his parents are Israeli, and they came to the U.S. when he was three. He studied Shukoki Karate in high school. After a year of college, he went in search of “meaning” in his life and returned to Israel and joined the army. He served in Duvdevan and Oketz and learned Krav Maga in the LOTAR base in Mitkan Adam. When he returned to the U.S., he participated in a boxing club while at Columbia University, joined the Marines and learned the Marine Corps Martial Arts Program (MCMAP) and studied Muay Thai and Brazilian Jiu Jitsu. He left the Marines after 9/11 when he was asked if the U.S. would fight against Israel would he join against Israel and said no. He then taught Mauy Thai, boxing and Kick Boxing, worked for seven years in financial services, then returned to teaching martial arts.

His religious journey began at a Gateways Shabbaton while in college and grew when he visited the Chabad in San Diego, eventually becoming shomer Shabbat. He met his wife Yael, through a Jewish dating website; they currently live in Kew Gardens Hills with their three children.

Even-Esh said “people are more apt to respond” because of his life history and “speaks their language. I want the Jewish community to be stronger, physically more healthy and able to defend themselves. Mentally they are fairly strong, the physical component seems to be lacking.”

He pointed out that some yeshivot don’t allow their students to study martial arts. Even Esh offers that he can teach it in the home and privately and keep it in the Torah framework. He began teaching it because “thank G-d we have enough doctors, lawyers, CPAs, even Nobel prize winners in the Jewish world. But Jews and especially frum Jews, who can teach self defense are a very rare breed. It’s an important skill.” He said that halacha obligates one to defend oneself from an attack.

He noted that Krav Maga initially came out of a military need, with hand to hand combat as a last resort, that it is violent but has been toned down for civilian use, nothing like the original though there are similarities.

He does not teach to hit, but assesses the boy and teaches skills through games, techniques that won’t hurt the attacker. He said that in the frum community physical activity is lacking in general and self-defense in particular. “It’s not just a skill but renewal for Jewish life. If you sit all day, you can expect to be a good husband and father, but need some sort of break. Physical activity is critical to live longer and do mitzvoth.”