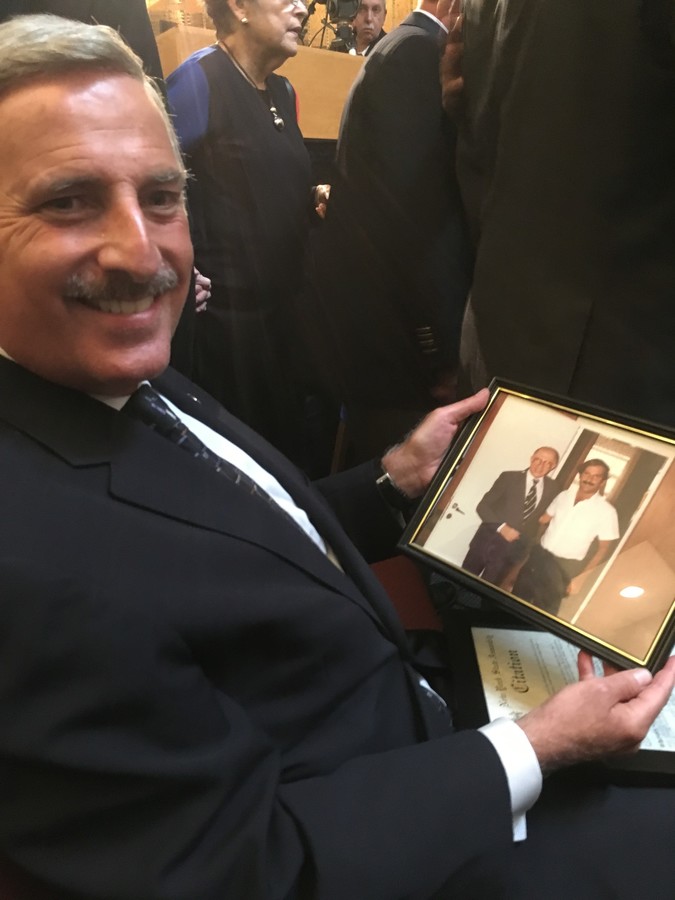 Queens Assemblyman David I. Weprin brought a photo that pictures him with Israeli Prime Minister Menachem Begin in 1981. Begin was referenced by several speakers, in anticipation of his upcoming 25th yahrzeit.
The Jewish Star / Ed Weintrob

Israel’s Minister of Justice Ayelet Shaked told a full house Sunday evening that the American-Israeli bond was “unbreakable and unshakable” and that the “importance of an undivided and unified Jerusalem” to the Jewish people meant that the nation’s capital would never be divided.

“No terror attacks, no murder’s knife, will erode the iron will of the people of Israel and prevent our beacon from shining its lights,” she said during an event sponsored by the National Council of Young Israel in the Young Israel of Jamaica Estates.

“In the continuing struggle for the right to be a free people in our land, the light wins,” she said. “Day after day the light overcomes the darkness,” and the clearest proof of this victory is the growth of the Jewish population in Judea and Samaria.

Klein said that use of the term “occupation” to describe Israel’s role in Judea and Samaria was “Orwellian.”

“There is no occupation. This is an Orwellian propaganda lie,” he said, pointing out that most of the West Bank areas where Arabs reside are self-governing — or “occupied” by the Palestinian Authority.

As for Jerusalem, Klein debunked the myth that the city, always holy to Jews, was of like importance to Muslims.

“Jerusalem was the capital of Israel under King David 3,000 years ago. It was never the capital of any other nation except Israel throughout history,” he said. “When the Arabs conquered Palestine in 716, they made Ramla the capital, not Jerusalem. … Since first census in the mid-1800 until 1948, the majority of people living in Jerusalem have been Jews.”

Bolton, who served at the U.N. under President George W. Bush, was a leader, while assistant secretary for International Organization Affairs at the Department of State under the first President Bush, in the successful effort to rescind the United Nations resolution from the 1970s that had equated Zionism with racism.

With repeal, “I thought we made progress,” Bolton said on Sunday. But it became “very clear very soon that repealing that resolution didn’t change anything.”

Bolton painted a grim picture of crisis points around the world today.

He mocked those who ridicule the use of “disproportional force” since when we “bring to bear overwhelming power [we] save American lives.”

With Sunday’s event occurring just a few days after the 15th anniversary of the 9/11 terror attacks, Shaked said that a “direct line connects the terrorists who planned and perpetrated the Sept. 11 attacks and terrorists who this year attacked innocents in Oralndo, in Jerusalem, in Paris, in Tel Aviv, in Istanbul, in Brussels and in Kiryat Arba.

“The hate is the same blazing hate, the aim is the same aim, to harm whoever thinks, dreams or prays differently from them.”

The enthusiastically pro-Israel and pro-American rally opened with co-chair Dr. Paul Brody singing both the U.S. National Anthem and Hatikvah.

The event strayed onto political grounds when J. Morton Davis of Lawrence suggested that he might not trust a hot-tempered Donald Trump with the “button,” and Trump Jewish Adviser David Friedman spoke for several minutes promoting his candidate.