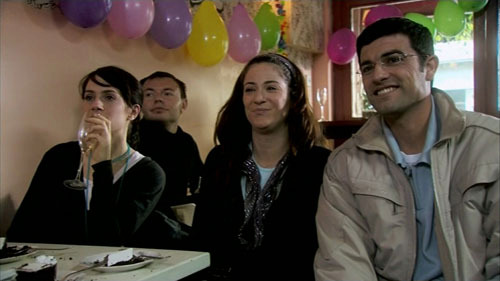 Srugim, the Israeli television phenomenon, has arrived in America.

“There’s a lot of fascination on the part of American Jews about Israel life and culture,” explained Elie Singer, CEO of Compass Productions, the parent company of The Jewish Channel. “Usually, it’s very hard to get beneath the surface and this has made it accessible, not only about the Orthodox community, but the single Orthodox community.”

Srugim premiered in 2008 on Israel’s Yes satellite network before being picked up by Channel 2. It has received near universal critical acclaim and achieved commercial success.

Srugim tells the story of five observant singles living in central Jerusalem’s Nachlaot neighborhood. The show derives its name from the crocheted kippot the male characters wear, which defines them in terms of both their religious and secular outlooks. (It’s American equivalent, Modern-Orthodox, would not make nearly as good a show title). The five main characters juggle careers, families and their personal lives, keeping an eye on their central goal: a good shidduch.

The show is steeped in the cultural norms of the Orthodox world. Singles meet each other over Friday night dinner and risqué is not a child out of wedlock, but a woman making Kiddush for herself or majoring in Bible Studies. It almost makes sense that an unmarried 30-year-old girl would refuse to get a new bed; afraid that she would be too comfortable and, in her words, “why would I get married?”

In the memorable opening scene, Hodaya, the quasi-rebellious daughter of a rabbi, recalls falling into a polluted river after a boy refused to grab her hand.

The show’s success in Israel would have been hard to predict.

The Jewish Channel was in negotiations for close to a year for the right to air Srugim in America.

Part of the show’s success is its take on changes within Orthodox life itself, Singer maintains.

“It reflects the secular culture at large,” he said. “It reflects the fact that women are free to pursue careers, where years ago, they weren’t as free. Today there are all these mechanisms and it’s changed the way people work.”

The show, which has been praised for its authenticity in describing religious life, is the work of Eliezer “Laizy” Shapiro and Havvah Deevon, graduates of the Ma’aleh School of Television, Film and the Arts, a college in Jerusalem that caters to religious individuals with a creative bent. Both were excited about the show’s arrival on American shores.

“What takes place here in Jerusalem is a miniature of the Upper West of New York,” joked Shapiro, who is unmarried but dating someone seriously. He described a mixed reaction to the show in Israel.

“On the right-hand side, the more religious side, hardliners are upset,” he reflected. “They feel it shows a bad picture and they’re afraid that secular people will not look at religious people seriously. The more mainstream [population] liked it. I think it has to do with having a sense of humor. I think a society that can make fun of itself is a stronger society than one that is just trying to show a beautiful picture of what it is.”

Shapiro added that he felt the show was changing the perspective of religious characters on television and attempting to close a widening gap between the religious and secular populations in Israeli society.

“That was the point of the show; people identify with religious people,” he said. “They’ve become human beings. You see characters in a very one dimensional way; sometimes they’re pretty stupid, ugly and evil in worse cases.”

The members of the cast are secular with the exception of Amos Tamam, who was raised traditionally in a Sephardic family. To get in character, the actors spent a few Shabbat dinners with observant couples.

Deevon said both creators wanted to film the show in Jerusalem but it was cost prohibitive. They settled on shooting exteriors in Jerusalem and interiors in Tel Aviv.

“People see their homes and they are excited,” Deevon said. They recognize cafes. Jerusalem is on film, Jerusalem is on TV. Jerusalem, if it’s on television [in the past], is connected with the prime minister or the police, and now it’s connected to romance, love and broken hearts.”

While the show is in talks about a third season, don’t expect too many more episodes of Srugim.

“It’s not a sitcom you can run forever,” Shapiro explained. “Seinfeld [and] Friends can run for ten years. We’re a drama on the light side and you get stuck where to go. A good Israeli drama goes for three seasons and that’s what we’re going for.”

“We’re talking about a fourth season and if we feel there’s enough, we’re going to do it but only if we feel we have what to tell.”

Opinion: The elephant in the room

16 ways you know Sukkot is coming to Israel