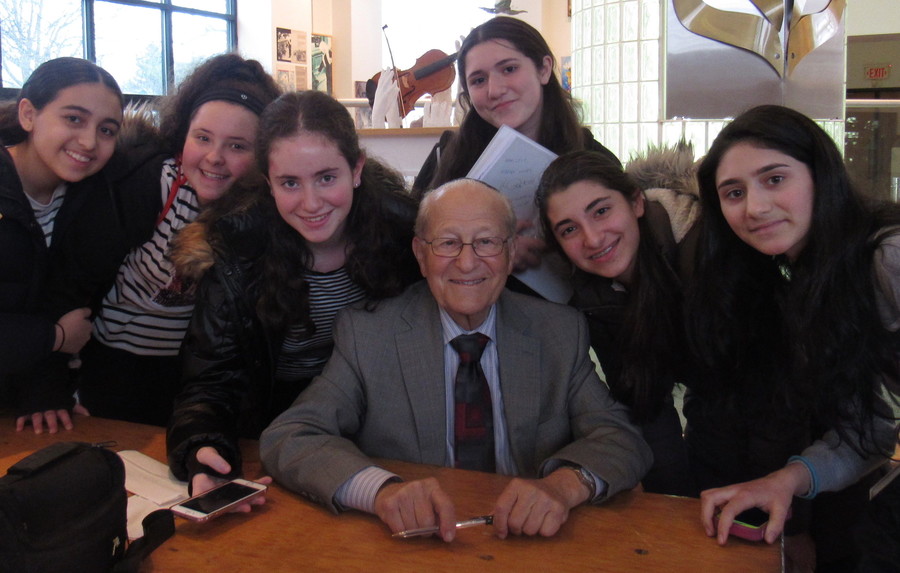 Students at the Yeshiva of Central Queens visited the Holocaust Resource Center in Manhasset to meet with Survivor Irving Roth.
By Moishe Rechester, Grade 8

Eighth grade students from Yeshiva of Central Queens visit the Holocaust Resource Center of Temple Judea, in Manhasset, to meet with Survivor, Irving Roth, author of Bondi’s Brother, a memoir about his experiences in the Holocaust, which the students had read in class.

Roth was born in 1929 in Kosice, Czechoslovakia. Growing up in the town of Humenne, his first love was playing soccer. When the Nazis came to his town, he was no longer allowed to attend his school, play in the playground or participate in soccer matches; because he was Jewish, he had to wear a yellow star on his clothing.

He is a survivor of the liquidation of the Jewish community in the town of Humenne, Eastern Slovakia; Auschwitz and Buchenwald concentration camps and the death marches that preceded the end of the War.

On April 11, 1945, the U.S. Army showed up at the camp and Roth was liberated. After the war, in 1947, he immigrated to the United States. He fought in the Korean War and documented his experiences in writing, teaching and lecturing.

Roth is the director of the Holocaust Resource Center and an adjunct professor at the University of Maine. He received the Spirit of Anne Frank Outstanding Citizen Award from the Anne Frank Center USA for promoting human rights, social justice and for conceiving, developing and initiating the Adopt a Survivor program in the U.S. He is also an author on the Holocaust and a recognized speaker on the subject in the U.S., Canada and Europe.

The students watched a “Prelude to the Holocaust” presentation and then a video of a trip taken with a group of college students on a Holocaust remembrance tour to Poland.

Following Roth’s lecture, the students had a chance to look around at all the art work from the Holocaust and read through saved articles. He signed the students’ copies of his book.

This experience and others like it are so vital to keep the teachings of the atrocities that took place during the Holocaust alive so that we never forget.