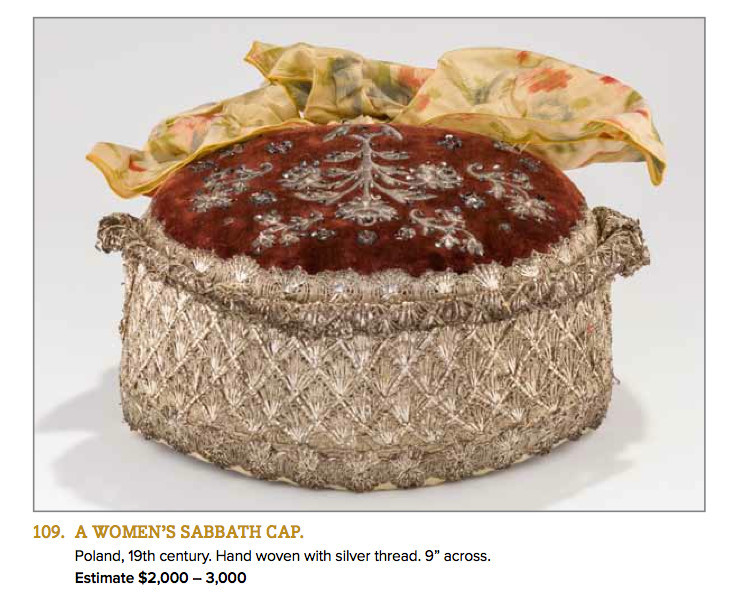 A women’s sabbath cap handwoven with silver thread, one of several antique Judaica items that will be auctioned by J. Greenstein & Co. on Dec. 12. 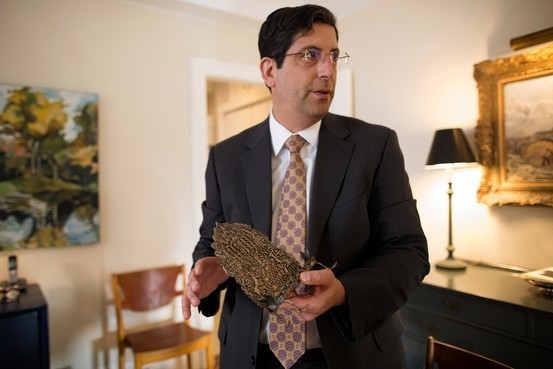 J. Greenstein and Co. in Cedarhurst will auction over 350 pieces of antique Judaica in a lead-up to Chanukah.

Each item placed for sale represents a time and place in history. Many of today’s religious practices are hybrids of biblical law meshed with rituals and practices that were place when and where they were first practiced. The pieces being auctioned carry the lore of a rich history that has enhanced Judaism over the centuries.

Jonathan Greenstein, famed antiquities expert and historian and founder of the auction house at 417 Central Ave., talks with pride about the pieces in this collection, which will go on sale on Monday, Dec. 12 at 1 pm.

Items hail from ac-ross the Jewish world — Poland to Persia, Morocco to Israel — reflecting a common history, with similar practices, struggles and celebrations, but infused by the mannerisms of the societies in which each lived.

A featured piece of the auction is an 1880s sefer Torah inscribed with Sephardic-style handwriting, crafted by a Bukharian Jewish scribe. Hailing from the central Asia, the Bukharian Jewish culture resembles a cross between Russian-speaking Ashkenazi Jews and that of those from Persia. This sefer Torah reflects a similar mixing of cultures. A plain wooden scroll reminiscent of those found on a Russian Torah is wrapped with parchment reflecting Sephardic heritage. Subtleties of cross-cultural interactions are found in other objects in this collection.

A Woman’s Sabbath Cap is an example of adding beauty to a life of mitzvah-keeping. In Poland, Jewish women would “cover their hair within the presence of men other than their immediate family,” explained Greenstein. “It was a custom among wealthy women in Poland to wear these very elaborate caps.” Placing a beautiful hat on their head was not only sanctifying themselves by keeping Jewish law, but it also allowed them to assert their beauty while also maintaining their modesty.

Another item that stands out is a velvet Torah tik (covering) made in Persia in the early 1900s (with the original Torah included).

The velvet glimmers with a rose-like color, which is complemented by ornate gold and silver designs. When the tik is opened, the Torah within opens with a golden shine, its top plated with brass.

The shape of the top of the tik is clearly influenced by Persian architecture, almost like the arches in some of the mosques in Isfahan. Again, cross-cultural interactions are apparent. This is a museum-quality piece, and would be at home in the hands of a private collector.

“The Persian sefer Torah was actually found in the Zaleznik estate,” Greeenstein said. “It was very surprising to find such a piece in a collection of a very Ashkenazi family. I imagine Dr. Zaleznik wanted to have an example of each discipline with every heritage represented.”

It is due to the wide span of interests of the Zaleznik family that J. Greenstein and Co. is able to auction such a diverse group of items this month.