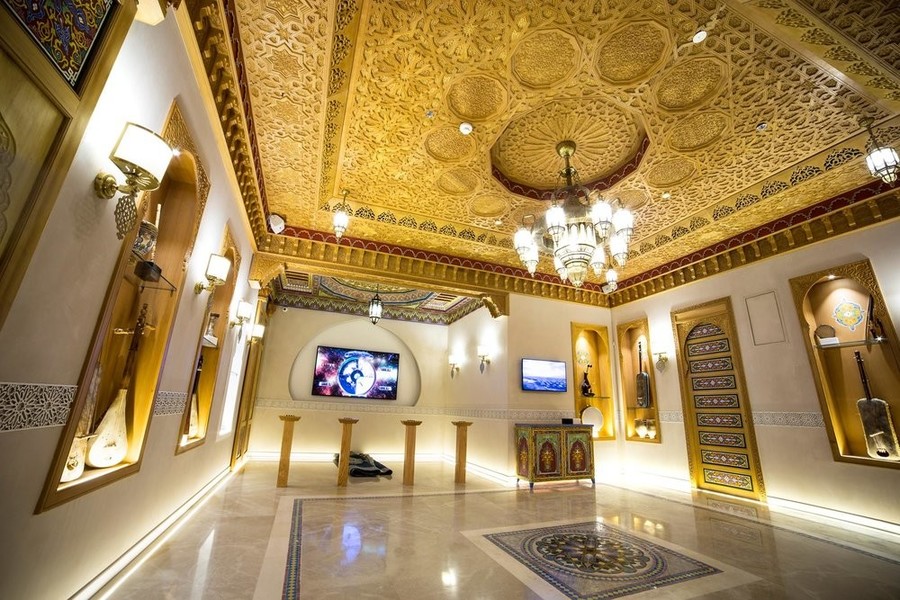 Is it a coincidence that the two people most intimately involved in creating the Hebrew Music Museum are both Levis, descendants of the tribe dedicated to providing music in the Temple?

For 12 years, Laurent Levy, the museum’s sponsor, and Eldad Levy, its director, (they are not related) each had a vision of creating an interactive, state-of-the-art museum in the heart of Jerusalem that would celebrate Jewish music. “When we met five years ago we were both amazed that we shared this dream,” said Eldad Levy, a professional musician. “He said ‘Let’s do it’ and that was the beginning.”

During five years of planning for the museum, they collected hundreds of authentic instruments from around the world, conducted real estate negotiations in the city’s trendy Ben Yehuda neighborhood and designed and built a one-of-a-kind exhibit space.

Representing an investment of 20 million shekels — about $5 million — the Hebrew Music Museum swung open its doors in April.

Today, the Levys’ dream has become a reality. The place attracts more than 1,000 visitors a month who come to see, and hear, what it’s all about. They’re immersed not only in the history of Jewish music, which has taken so many guises depending on place and time, but also how it ties back to the music of the two ancient Temples, one of which stood not far from their location.

Inside the museum, 260 musical instruments, from seven lands where Jews have lived in the Diaspora, are spread throughout seven rooms. Each room is decorated sumptuously in the style of the country it represents: Yemen, Morocco, Central Asia, Iraq, the Balkans. In a room develoted to Israel and Europe (don’t miss that gorgeous hand-painted ceiling), there’s a harp much like the one King David played while composing his Psalms.

In each room, visitors can listen to the music of each place and time using hand-held tablets they’re given when they enter the museum. These portable devices are programmed with explanations in five different languages; Hebrew, French, English, Spanish and Russian. The message is a potent one: each place Jews have lived, they have adopted the local instruments, and often the folk music of the region, and infused it with Jewish tradition, lyrics and soul.

“When designing the museum, we kept asking ourselves, ‘How can we touch people’s hearts with the power of Jewish music from throughout our history?” Eldad Levy said. “We knew they’d need to hear the music, see the instruments and learn something about the culture we developed in each place we lived.”

One recent example of this fusion is Klezmer, which was popular in 18th century Eastern Europe at the time of the chassidic master Rabbi Baal Shem Tov. It continues to attract die-hard fans today.

Dating back much further is Jewish life in Iraq. There’s a faithful replica of the kind of Babylonian harp Jews played there 3,000 years ago. The original instrument was excavated by Germans archeologists, who’d been conducting digs in Iraq in the early 20th century.

“As amazing and beautiful as [the instruments] are, the real story is what’s behind the instruments,” Levy adds. “They were each an expression of Jewish life in these places.”

By far the highlight for most visitors is the temple room that features a large model of the Second Temple, which stood on Jerusalem’s Temple Mount for 420 years before it was destroyed by the Romans in 70 CE. Patrons put on virtual reality headsets, which took three years to develop and program, to gain an inside view of a recreation of the service going on inside the Holy Temple. This is the place to hear a seemingly universal word escape the lips of young and old alike, “wow!”

“It’s like you‘re in the Beit HaMikdash with the kohanim,” said 11-year-old Yosef Levi (also no relation) who lives in Gush Etzion and was visiting with his grandmother. “You can see them working in there and you can hear the music.”

Hearing the music (which Eldad Levy composed) that’s the most important part of the virtual reality experience. “The job of music – and we’re talking about Jewish music – is to connect one person to another and another, wherever we live, and that’s helped keep the Jewish people strong since Temple times,” he says. And, he adds, “Maybe that’s why people keep coming back to the museum and bringing their friends and relatives. Religious or not, they’re all able to feel it.”

Yosef’s grandmother Elsa Levi, a native New Yorker who now resides in Neve Daniel, enjoyed the experience, saying, “It was amazing to see so many instruments from around the world that Jews played, instruments I never knew existed.”

The Levys are not done with their vision just yet. They’re building another story onto the roof for a 400-seat auditorium for concerts, films and presentations. It’s projected to open next year.

Still, with or without an auditorium, Yosef Levi is recommending his friends go. “Yeah, they’ll see all kinds of instruments from all over the world that don’t even look like instruments” he says. “Wherever Jews lived, we always had our music.”