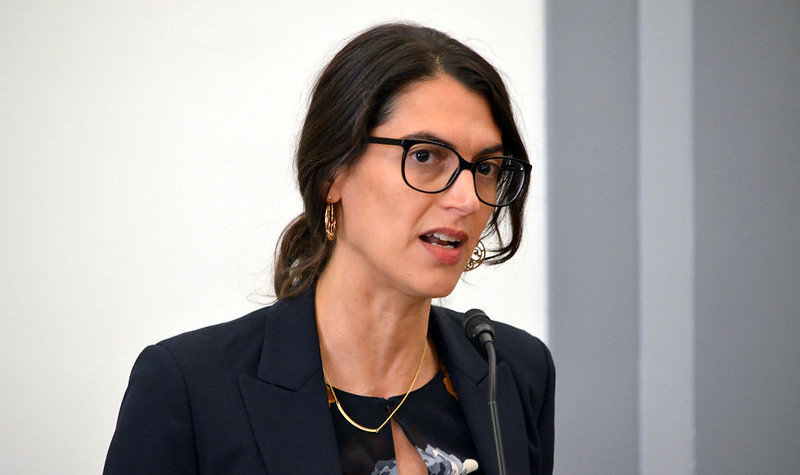 His naming of a Human Rights Watch official to a top State Department post is more evidence that this is not a pro-Israel administration.”
By Jonathan S. Tobin

As President Joe Biden gradually fills all of the approximately 4,000 federal positions that require a nomination from the White House — of which 1,200 require Senate confirmation — the critiques of his choices can be both repetitive and dull. Republicans and conservatives can always find something to dislike about almost every nominee for the obvious reason that each is a Democrat and a liberal.

In the not-so-distant past, absent a revelation about a scandal or something else that is disqualifying, most nominees were confirmed by the Senate on a bipartisan basis because both parties respected the principle that presidents were entitled to have the people they wanted to serve them in the government. But with partisanship at its highest level in memory with the two parties bitterly divided on seemingly everything, many confirmation votes in the Senate are strictly along partisan lines. With the Senate evenly split with 50 Democrats and 50 Republicans (with Vice President Kamala Harris available to break ties), it makes for a lot of close calls for nominees. Yet Biden’s picks are scraping through with a few moderate Republicans sometimes crossing the aisle to let the president get his way.

Indeed, following the scorecard of confirmations in the months since Biden came to office, one gets the feeling that many in the GOP aren’t that enthusiastic about making a stink about every Democratic pick, especially for sub-cabinet level posts, the way some conservative activists would like them to.

The reason for that is no mystery. Elections have consequences. The government has to operate, and if the Republicans manage to knock off one nominee, the likelihood is that Biden’s replacement won’t be any better from their point of view. Still, there are instances where it is vital that the opposition takes a stand both because of the unsatisfactory nature of the nominee or because a confirmation fight has taken on great symbolic value.

There’s no better example of a necessary fight than the one that is brewing over Biden’s nomination of Sarah Margon for the post of assistant secretary of state for democracy, human rights and labor. In that post, Margon would manage a portfolio mainly consisting of American stands on human-rights issues and the promotion of democracy.

Like just about everyone who might be considered for a senior State Department job, Margon is an outspoken critic of former President Donald Trump and his policies. Her résumé lists a stint as a staffer on the Senate Foreign Relations Committee, as well as one as a foreign policy adviser for former Sen. Russ Feingold (D-Wis.). Yet her connections go beyond those typical qualifications for a Democratic job-seeker.

She has also been a “conflict policy adviser” for the leftist Oxfam charity, as well as a foreign-policy adviser for the Open Society Foundations, the group through which billionaire George Soros has funneled much of his vast wealth into a variety of causes. Those two items alone would raise questions about Margon’s attitude towards Israel. Oxfam is a bitter critic of Israel, a major funder of Palestinian groups and a promoter of boycotts of Israeli settlements. While operating under the guise of philanthropy, as a report from NGO monitor documented, Open Society’s funding fuels the conflict in myriad ways and does its best to undermine and attack Israel.

But far worse is the fact that Margon has also served for several years as head of the Washington office of Human Rights Watch.

Of all the non-governmental organizations that have devoted themselves to the cause of demonizing Israel, Human Rights Watch is arguably the worst and the most vicious. Indeed, just this last week, it issued yet another report falsely branding Israel as an “apartheid state.” Indeed, it has done as much if not more to promote that vicious lie as any group. Although its advocacy has been repeatedly debunked and exposed for virulent prejudice against Zionism and Israel, its determination to rationalize, excuse or ignore Palestinian terrorism continues to be promoted in the mainstream media.

Unlike some other groups that are merely critical of Israel, Human Rights Watch makes no secret that its activism in the Middle East is motivated by animus against the right of Israel to exist. Indeed, its new report treats terrorism against the Jewish state as a right that deserves respect rather than a crime.

Margon’s views fit in nicely with the Biden administration’s declared intention to downgrade advocacy for religious freedom abroad. She’s also on board with a desire to demote Egypt and Saudi Arabia, which are brutal dictatorships at home but have embraced peace with Israel, from the status of important allies to objects of criticism and censure. That’s despite the fact that the only alternative to the authoritarian leaders of those nations are Islamists who are just as opposed to human rights as the government.

The upshot of her advocacy is to treat American forces fighting Islamists as villains and to attack friends of America and Israel. As Rep. Lynne Cheney (R-Wyo.) told The Washington Free Beacon, Margon “has a record of prioritizing the interests of terrorists over the security of the United States.”

Just as damning is her support for the blatantly anti-Semitic United Nations Human Rights Council from which Trump rightly withdrew and which Biden has rejoined. She’s also supported the International Criminal Court and its attempt to label Israeli self-defense against Palestinian terrorism as war crimes.

Margon is not the only Biden nominee with a record of hostility to Israel, but she is unsurpassed in terms of her ties to anti-Zionists and anti-Semites.

Democrats may claim that Margon will merely be taking orders from Biden and Secretary of State Antony Blinken. But just as the appointment of Robert Malley signaled the administration’s determination to return to a policy of appeasement of Iran, so, too, does the choice of Margon indicate what can be expected on policy towards Israel. Indeed, Biden would have been hard-pressed to find anyone else who would be more likely to undermine the alliance with Israel or to support those seeking to delegitimize it.

Biden’s apologists claim that despite differences with Israel’s government on the conflict with the Palestinians or the threat from Iran, he and Blinken are still strong friends of the Jewish state and opposed to those who wish to see it eliminated. Yet the appointment of Margon exposes that argument to be a lie.

A pro-Israel administration simply doesn’t put someone with Margon’s beliefs in a position to wreck the alliance and give aid and comfort to the Jewish state’s enemies.

On this nomination, there can be no compromise. Supporters of Israel — be they Republicans or Democrats — are obligated to vote against her. Margon’s confirmation would make it clear that Israel has an enemy in a position of power in Washington who will assist those who masquerade their hate under the guise of human-rights advocacy rather than to oppose them.

Yom Kippur is, of course, special. In Medinat Israel, it’s even more so.