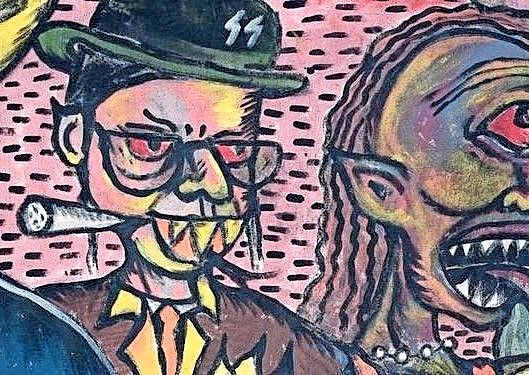 Art depicting a fanged Jew, from the Documenta 15 exhibit.

We can no longer assume that basic knowledge of the Holocaust plays an immunizing role, especially as the Nazi extermination program fades further and further into history.”
By Ben Cohen

Monitoring and analyzing contemporary anti-Semitism, which I do rather frequently, is most of the time a frustrating experience, but no more so than now.

For all the ink that has been spilled in elucidating the resurgence of Jew-hatred in the last 20 years in myriad different countries and contexts, it’s tempting to conclude that the Jewish community has made no progress at all in explaining how to even identify anti-Semitism, let alone combat it.

Some readers might say that I’m exaggerating our predicament; after all, an entire transnational infrastructure has been created to counter the problem. In the United States, we have a State Department position at the ambassadorial level dedicated to combating anti-Semitism, while governments in Germany, Spain and the United Kingdom have created similar positions in those countries. Whereas 20 years ago, elected politicians barely gave a thought to antisemitism, now hardly a week goes by without a condemnation from a parliamentarian or a cabinet minister.

“There is no vaccine for anti-Semitism and xenophobia,” observed the UN Secretary-General António Guterres in January 2021, in comments on the anti-Semitic conspiracy theories that raged at the height of the COVID-19 pandemic. “But our best weapon remains the truth.”

Yet seemingly intelligent people are finding it supremely difficult to grasp the most basic aspects of that truth. Nearly 80 years after the Holocaust, with countless movies, documentaries and books on the market and Holocaust memorial museums springing up in provincial towns as well as big cities, one might think caricatures of Jews with hooked noses and sleazy facial expressions, or comments about “the Jews” owning and controlling a particular activity or sector, would be rapidly and unproblematically identified as anti-Semitic.

Sadly, there are plenty of examples with which to illustrate my point, so I will pick two of the most recent ones. First, in Germany, where the city of Kassel is currently hosting the 15th edition of the prestigious Documenta festival of modern art; this year’s theme is the “Global South” and its curator is an artistic collective from Indonesia called ruangrupa.

During the build-up to the festival in the first six months of this year, there was significant concern over ruangrupa’s endorsement of the anti-Zionist BDS campaign that seeks to quarantine Israel from the international community. But once the festival opened, those concerns soon gave way to the much starker realization that Nazi-style anti-Semitism was on display.

A large mural that was mounted in the center of Kassel, titled “People’s Justice,” depicted a rogues gallery of characters ostensibly associated with the Suharto dictatorship in Indonesia, among them an Orthodox Jew with a hooked nose and a fedora hat embossed with the letters “SS,” and an Israeli soldier with the face of a pig and a helmet marked with the word “Mossad.” About two weeks after the scandal over the mural, a visitor to the exhibition discovered similarly antisemitic caricatures in a brochure celebrating the solidarity with the Palestinians among women in Algeria.

Subtle? About as subtle as my second example, which involves Miloon Kothari, a member of the insultingly named UN “Independent International Commission of Inquiry (COI) on the Occupied Palestinian Territory, including East Jerusalem, and Israel,” who opined in a late July interview with a viscerally anti-Zionist website that negative reaction on social media to the commission was the result of the ownership and control of social-media platforms by the “Jewish lobby.”

Just as the mural on display in Germany didn’t take the extra step of coding its anti-Semitism, neither did Kothari waste time with euphemisms like “Zionists” or “powerful pro-Israel interests” in making a point about Jews. And just as the management team behind Documenta agonized theatrically about how to acknowledge the hurt and fury of Germany’s Jewish community without alienating their Indonesian colleagues, resulting in apologies so qualified that they weren’t really apologies, Kothari’s own somewhat pompous expressions of regret last week can be judged in similar fashion.

Asked about the mural, Sabine Schormann, the director of the Documenta festival who shortly after resigned under the weight of the scandal, recognized its offensiveness to Jews but pleaded for understanding for its creators, who felt that they “were under general suspicion and defamed and sometimes threatened, because of their origin, their skin color, their religion or their sexual orientation.”

Kothari, meanwhile, penned a lengthy letter to the chair of the UN Human Rights Council in which he expressed regret for his choice of words without ever recognizing that these words were anti-Semitic. They were “incorrect, inappropriate and insensitive,” he said, but the really meaningful step — identifying these words as a faithful representation of the age-old anti-Semitic trope of “Jewish power” — was never taken.

For Documenta and Kothari alike, recognition that both were trading in unvarnished, dangerous anti-Semitic stereotypes remained elusive.

Yes, of course, there has been widespread condemnation of both Documenta and Kothari, much of it from non-Jews. But as welcome as that chorus is, it doesn’t change the fact that the Documenta festival is still exhibiting, and that no one has been charged with anti-Semitic incitement under Germany’s stringent laws, while the UN commission remains in operation despite numerous calls for it to be shut down.

All that has changed is that these days, condemnation of anti-Semitism is more widespread and more frequent than before — but then again, there are plenty of incidents out there to condemn.

If we can’t create a watertight consensus around the fact that caricatures of Jews with hooked noses are not just anti-Semitic, but impregnated with the potential for the violence of the Nazi era, or that casual references to the “Jewish lobby” revive those same tendencies, then we are never going to be successful when it comes to the more coded expressions of anti-Semitism.

Jewish educators, unfortunately, now need to focus on drawing out the intimate links between the anti-Semitic caricatures of the last century and those in this one. We can no longer assume that basic knowledge of the Holocaust plays an immunizing role, especially as the Nazi extermination program fades further and further into history.

Just as the fight against racism starts with identifying and isolating its ugliest and most dishonest claims (black men as “natural” sexual predators, Roma and Sinti gypsies as “natural” thieves and so forth) so it is with anti-Semitism (Jews as “natural” exploiters who cynically damage other people’s interests as they pursue their own).

As hard as it is to admit, we still need basic education about how to identify and correctly respond to the transparent, uncomplicated anti-Semitism seen at the Documenta exhibition and in Miloon Kothari’s comments. Until we pull that basic task off, all the ambassadors and envoys and members of parliament lining up to condemn anti-Semitism are in danger of being written off as just so much window dressing.