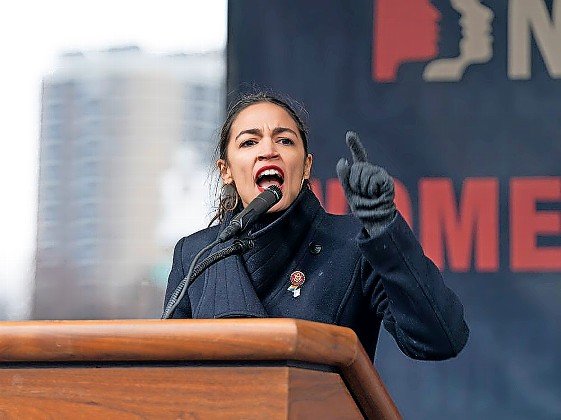 Rep. Alexandria Ocasio-Cortez of Queens and the Bronx speaks during Women's Unity Rally at Foley Square.
By Daniel Greenfield

In 2020, there were three Jewish House members from the New York City area. By the end of 2022 there may be none, as Rep. Lee Zeldin, a Republican, leaves his Long Island district to run for governor.

How things got that way is indicative of what happened to both the Democrats and the Jews.

The Manhattan primary between Rep. Jerrold Nadler and Rep. Carolyn Maloney pits two establishment remnants against each other. Both old Democrats have been in office since the early ’90s. Now Maloney, 76, and Nadler, 74, have been forced to fight it out after a plot by Democrats to aggressively gerrymander the state to protect their control of the House backfired in court.

It would be a sad state for anyone to be represented by Nadler, let alone New York’s Jews. And Nadler doesn’t represent them. Instead he supported the Iran deal and is backed by the PAC for the Soros anti-Israel lobby group, J Street. Last year, he responded to Islamic violence against Jews by stating, “I remain deeply concerned by the violence in Jerusalem, including Israeli police violence, and I urge all parties to exercise restraint.”

When New York Jews turn to pro-Israel members of Congress from the city, they usually go to Rep. Ritchie Torres, a black gay Latino politician from the Bronx who has become the most vocal pro-Israel Democrat from the city, and who can also be counted on to drop in on Bill Maher.

Whether or not Nadler survives another term, he isn’t representing anyone except himself. And the old tier of New York Jewish House members is making way for allies of the leftist “Squad.”

Within the last two years, Rep. Nita Lowey retired, making way for Rep. Mondaire Jones, the other first black gay congressman from New York, who promised to be pro-Israel, but only by the current standards of a party drifting into the militantly anti-Israel camp. Rep. Elliot Engel was ousted by Rep. Jamaal Bowman, an AOC ally and a militant opponent of Israel and Jews.

What Torres, Jones and Bowman all have in common is that they’re “progressives,” which is to say lefties, who have ties to the Sanders machine. Torres was a Sanders delegate, although Sanders didn’t endorse him, while Jones and Bowman were both endorsed by Sanders.

While AOC’s theatrics may get much of the attention, hard lefties are remaking the face of New York’s congressional delegation, replacing the old Jewish, Irish and Italian Democrats with minority radicals. Whoever survives the Nadler/Maloney matchup will likely have to make way for another “progressive” from the same political template before too long.

Senator Schumer, 71, young by the standards of a very old establishment, lives in fear of a primary challenge, and is unlikely to have a future if the Democrats lose the Senate.

New York’s Jewish community has not disappeared. Or at least not in the literal sense. But the most cohesive elements of it, the Orthodox Jewish communities of Brooklyn, tend to be conservative and are gerrymandered into districts meant to diminish their influence. The same is true of Middle Eastern and Russian Jewish immigrant communities who also vote Republican.

A 2020 nationwide poll of Orthodox Jews found that 83 percent intended to vote for Trump over Biden. And while polls are fallible, voting maps from 2012 showed Romney decisively winning Orthodox, Middle Eastern and Russian Jewish areas. In one precinct of Middle Eastern Orthodox Jews, Romney took 97 percent of the vote. Trump may have done even better.

It’s understandable why the Democrat establishment has used gerrymandering and every dirty trick in the book to keep a conservative electorate that trends Republican from being counted.

“There are places, in New York for example, where you’ve seen a growing ultra-Orthodox community becoming more active in politics,” David Axelrod, an Obama adviser, had warned. “The question is whether the rest of the Jewish community stays, remains politically active.”

Jews in New York are quite politically active, but no longer as a single group. The disappearance of Democratic Jewish House members from what was once the heartland of immigrant communities reflects the disintegration of any sustained liberal Jewish identity.

There are plenty of young Jewish liberals and leftists, but they don’t belong to communities. And they are less likely than ever to see themselves as members of a people. The old tribal logic of immigrants voting for people like them has all but disappeared among New York Jewish Dems.

The older generation, the one that Nadler belongs to, that Lowey and Engel represented, was still culturally Jewish, even if their first allegiances were to liberalism and to the Democrats, and even if their Jewishness consisted of little more than a Yiddish word and childhood memories.

But their younger counterparts don’t even have that. Or really anything, except leftist culture.

New York’s Jewish House members have disappeared because there are no longer Jewish Democrat communities. Instead there are Republican Jewish communities that are being gerrymandered and people with Jewish last names who belong to no community, who are generally agnostic when it comes to religion and whose only culture is pop culture.

Jewish Democrats helped destroy their own electorate, and are eliminating themselves.

There are still plenty of Jewish House Democrats, but they are increasingly less likely to represent actual Jewish communities. And that doesn’t bode well for their future.

Nadler is the embodiment of an aging and fading establishment that abandoned its Jewish identity, replacing it with party allegiance and leftist politics, only to be left with nothing.

The lesson of the last Jewish congressman in New York ought to hit home for an antiquated communal infrastructure of federations and organizations that were assembled a century ago. These institutions are run by the Nadlers and Loweys until they’re turned over to woke staffers who transform them into something unrecognizable and devoid of anything Jewish.

That is how former Holocaust museums end up running George Floyd exhibits.

It’s not just about the Jews. In the last decade, Democrats have similarly been shedding their old Irish and Italian immigrant bases. St. Patrick’s Day and Columbus Day parades have been taken hostage by identity politics, and Democrat pols boycott them as often as they march.

And the Democrats are shedding Israel the way they’re dumping St. Patrick’s and Columbus.

The question is not when will the Jews wake up, but whether there will be any left to wake up.

The last Jewish congressman in New York is a metaphor for the passing of the communities that made the liberal American Jew into more than just another atomized upper middle class worshiper at the shrines of FDR, Adlai Stevenson and the Kennedy family. The disappearance of those communities will also eventually dismantle their institutions and infrastructure.

The Jewish communities that will remain will be traditional, religious and conservative.

And if you doubt that, just ask the last Jewish congressman in New York. If you can find him.