Who are the REAL colonizers in Israel-Palestinian conflict? 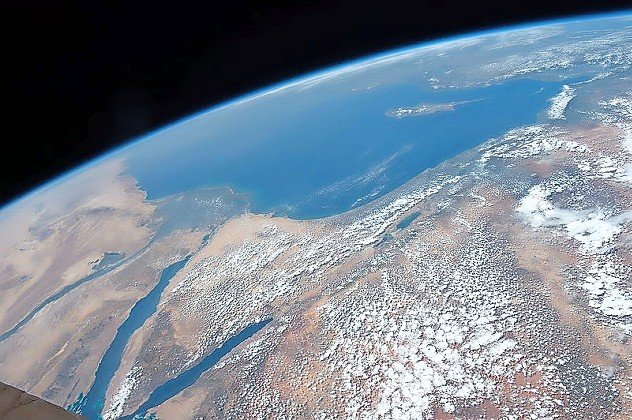 The Middle East as seen from 250 miles above in this April 14, 2016 photo from the International Space Station.

Rather than condemning Israel, progressives in the West who recoil at “settler colonial projects” should embrace the Jewish state as an example of decolonization.”
By James Sinkinson

Israel’s enemies have accused it of many outlandish transgressions over its 73 years. It has been called an offspring of Nazi Germany, a socialist outpost, a “Crusader nation” and an apartheid state. The Palestinian Arabs and their Western apologists happily appropriate the latest fad terminology describing something evil and attach it to the Jewish state.

One of the most persistent slurs against Israel in recent years, especially among academics, is pinning to it the label of “settler colonial project” or simply “imperialist state.”

Like almost all the slanders against Israel, this one has zero factual basis.

Imperialism is a policy of extending a country’s power and influence through diplomacy or military force. Colonialism is the policy or practice of one country acquiring full or partial political control over another, occupying it with settlers and exploiting it economically.

Throughout history there have been many colonizers and imperial powers, and they all had a host country while conquering other parts of the world—abusing the locals, exploiting their assets and imposing their own foreign cultures.

Israel, however, has no other country under its control and has never shown any interest in conquering the lands of others. The Jewish people have only had one land to which they are indigenous, and that is their national homeland. If Israel is an imperial or colonizing power, it would be the first case in history of an indigenous people colonizing their own country.

The Jewish homeland has only ever been colonized by others

Romans, Arabs, Crusaders, Ottomans, British and many other imperialist forces have subjugated the Land of Israel and its indigenous Jews. No other people in human history—except the Jews—sought to give this land independence.

Indeed, the Jewish people had sovereign nations in the Land of Israel from 1405 to 586 BCE and 530 BCE to 70 CE. They also had other smaller independent states during the intervening years, such as in the Tiberias area between 1558 and 1564.

For centuries, the Jewish population in the Holy Land—many of whom managed to survive persecution, forced conversion and exile—spoke the same language and held the same customs as their scattered brethren around the world, until the exiles returned to resume sovereignty in their ancestral homeland.

Arabs are the most successful colonizers ever

The irony of accusing Jews of colonizing Arabs is that the opposite is true. The Palestinian-Arab people belong arguably to the most successful colonizers in world history. Today, there are 22 Arab nations and 57 Islamic countries. Over 1.8 billion people are Muslims, constituting around a quarter of the entire global population.

While we read about and academics blithely reference the “Arab world”—which stretches across North Africa and the Near and Middle East—few mention that this entity was created largely by the violent subjugation of local indigenous peoples. Infrequently, we hear about Berbers, Yazidis, Arameans, Zoroastrians and Copts. These and many more, along with Jews, are examples of pre-Islamic peoples, cultures and religions that were either wiped out or forced into an Arab or Muslim culture.

Dozens of languages, cultures, religions and peoples that we only know from archeology did not survive the Arab armies of the seventh century onwards. These marauders enforced mostly complete adherence to the Arab culture and language and Islamic religion by dint of brutal force. While the European empires have largely crumbled and been disbanded by local anti-colonial movements, the Arabs implemented such a scorched-earth policy that few indigenous peoples still remember, let alone adhere, to their pre-Islamic identity.

Following Israel’s War of Independence, the almost one million Jews who lived in the “Arab world” were driven out or fled for their lives from homes in which they had lived long before the Arabs and Islam arrived. Yet the imperialist Arab mentality could not countenance that the original inhabitants of this small sliver—a miniscule fraction of the territory it considers “Dar al-Islam” (“the abode of Islam”)— would throw off its colonizers and return to indigenous rule.

While some claim that today’s Palestinian Arabs are indigenous to the Holy Land, this is also clearly false. Before the 20th century—and for the most part before 1964—Jews were the only people who referred to themselves as “Palestinians” (i.e., residents of Palestine). More importantly, the people we call Palestinians today never had a distinct identity—no distinct language, religion, organized society or culture—all required markers of indigeneity. In fact, they are Arabs, hailing from all over the Arab world.

Ironically, Jews are the only people in history since the brutal Arab conquest, occupation and colonization of the region who have risen up to reclaim their land. This has been considered an affront to Islam, and it is no coincidence that Hebrew, the indigenous language of the Jewish people, and Zionism, the national movement to return the people to their land, were violently repressed and banned in Arab countries.

Colonizer and the colonized

There is only one empire in this conflict, and it is not Jewish, a people who have never conquered any territory on the planet not their own, as opposed to the Arab world, which currently encompasses 5,070,419 square miles of land mass.

Rather than condemning Israel, progressives in the West who recoil at “settler colonial projects” should embrace the Jewish state as an example of decolonization—indigenous return and restored sovereignty. If they were honest, they would stand by the side of tiny Israel—with a population of nine million, surrounded by hundreds of millions who seek its destruction and its return to the huge Arab empire.

Just ask the Jews of the Middle East and North Africa who lived under Arab repression, discrimination and constant fear of violence for almost 13 centuries—who have finally returned home and make up the majority of the Jewish citizens of the State of Israel. Their recent history and experience of Arab imperialism, conquest and oppression reflects a sad, violent tale of Arab Muslim privilege. These Jews truly understand colonialism and what it is like to live under its yoke.