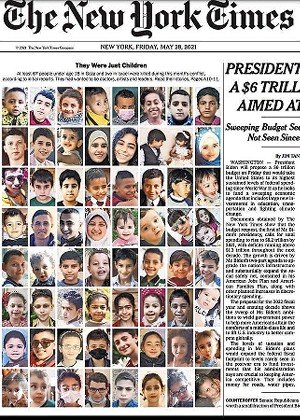 Blood libel on the cover of the New York Times.

While the Times has been consistently unfair to Israel, its front-page blood libel can’t be ignored. It’s an essential issue in the fight for Israel and the safety of the Jewish community.”
By Jonathan S. Tobin

For one of the New York Times’ most devoted readers, the front-page spread published on May 28 essentially accusing Israel of murdering Palestinian children was the final straw. Former Anti-Defamation League Abe Foxman tweeted that day that he was canceling his subscription. He wrote that he “grew up in America on the NYT” as an immigrant child and learned “civics-democracy and all the news ‘fit to print’ for 65 years but no more.” As he put it, “today’s blood libel of Israel and the Jewish people on the front page is enough.”

But to many other critics of the paper, Foxman was late to the party. That’s why many of the responses to his comments were along the lines of what took him so long to realize that the publication that considers itself the country’s paper of record has been slanting its news stories against Israel long before the recent fighting with Hamas.

The paper, which has been owned by a family with Jewish origins since the 19th century, has been resolutely anti-Zionist since long before the modern-day State of Israel was established 73 years ago. Any discussion of the Times’ complicated history of Israel coverage and anti-Semitism inevitably includes the way it buried news of the Holocaust while it was happening. And then once Israel survived the Arab world’s first attempts to snuff out its life and began to be portrayed as the Jewish “Goliath” oppressing the Palestinian “David,” the Times has been a source of unfair, out-of-context reporting about the conflict.

From the 1982 Lebanon War through the terrorism of the First Intifada — and then even bloodier Second Intifada that began in 2000 — intermixed with periodic bouts of fighting with the Hamas terrorist organization that has ruled the Gaza Strip since 2007, the Times’ treatment of Israel has been consistently unfair to Israel. At the same time, it often paints the Palestinians as hapless victims rather than ideological antagonists who are still determined to destroy the one Jewish state on the planet, as opposed to living in peace alongside it.

From that perspective, outrage over the Times’ latest egregious attempt to demonize Israel with a headline, “They Were Only Children,” splashed across the paper seems like just more of the same. And like many of its past attempts to paint Israel’s efforts to deal with Hamas and Palestinian Islamic Jihad rocket firings into Israel, this one was filled with errors.

At least one of the emotive pictures of slain Arab children spread across the Times’ front page was a stock photo of “cute Muslim toddlers,” rather than that of an actual child killed by Israeli fire. Another of the child “martyrs” was a 17-year-old member of the Mujahadeen Brigades, a Palestinian terror group, as the Times later noted in an article though without retracting his inclusion among the innocent dead children.

Those were far from the only blunders associated with that piece and related articles, including another front-page headline that falsely claimed that most of those killed in Gaza were civilians. In fact, the majority were, like that 17-year-old, operatives and fighters of terror groups killed by Israeli counterstrikes intended to silence the rocket and missile fire from Gaza into civilian population centers in the Jewish state. Equally appalling was that the source for some of their reporting was a non-governmental agency that has been credibly tied to the Popular Front for the Liberation of Palestine, another terrorist group.

This is familiar territory for those who monitor media bias against Israel. Indeed, look back at analyses of Times’ coverage or that of the broadcast networks of the first Lebanon war in 1982 or CNN’s coverage of the First and Second Intifadas, and you’ll see some of the same outrageous distortions of the truth, in addition to astonishing errors that were committed in these journalists’ haste to treat Israel as an oppressor or violator of human rights.

False accusations that Israel targets children, which Foxman not unreasonably labeled a “blood libel,” are nothing new even if the emotive nature of their recent coverage seemed different.

Yet Foxman isn’t wrong to sense that there is something very different about the way even already biased media are covering Israel. Even the Times crossed a Rubicon in recent years when its opinion pages ceased to be a forum for debate about the Middle East, where supporters of the Jewish state like AM Rosenthal, William Safire, and lately, Bret Stephens, would joust with critics like Anthony Lewis and Thomas Friedman.

Stephens remains a lonely supportive voice there. But he’s not merely outnumbered by the critics. The paper now routinely publishes anti-Zionist articles from its growing list of not merely liberal, but left-wing columnists, that treat Israel’s existence as illegitimate.

In an era when the memory of the Holocaust was still fresh, the notion that the Jewish state should be wiped off the map was considered beyond the pale even for the editors of the New York Times. But now such eliminationist rhetoric is considered fair comment in that daily paper and other mainstream media outlets.

This reflects not so much a sea change in journalism as it does the culture in which journalists operate.

In the past, media bias against Israel was pervasive but more often than not, it was the product of ignorance of the realities of the Middle East and the conflict on the part of many reporters and editors rather than an ideological grudge against Zionism.

In recent years, the growing support for radical ideologies linked to critical race theory and especially intersectionalism, which falsely links the Palestinian war against Israel to the struggle for civil rights in the United States, has become part of the normative beliefs of many on the political left. Since left-wingers don’t merely predominate in the mainstream press but make life difficult for anyone with centrist views or who are supportive of Israel — as writer Bari Weiss made clear when she left the Times last year — then it is only natural that the same attitudes should color coverage of the Mideast and associated issues.

That has become even more of an issue in the last year since the death of George Floyd carried the Black Lives Matter movement to prominence. That brought these ideas from the margins to the mainstream. The result is not just a significant increase in anti-Israel invective and media bias in response to the fighting with Hamas, but a legitimization of the kind of rhetoric that foments anti-Semitism.

Now it’s possible to see how the widespread acceptance of BLM-associated ideologies is making it harder and harder for pro-Israel voices to be heard in the mainstream media. Rather than dismiss such concerns about the way the Times, among other outlets, is trafficking such libels of the Jewish people must be understood as a significant problem.

Media monitoring groups like CAMERA, which began this struggle, and others, like Honest Reporting, have become more important than ever.

The problem isn’t so much a matter of Israel’s information strategy but a media that isn’t willing to listen to anything Israel or its friends say. What’s more, this trend is being facilitated by both Democratic politicians and left-wing Jewish groups who are joining in the demonization.

Rather than relying on futile attempts to be heard in outlets like the Times, the priority must be to strengthen alternate media outlets that are willing to tell the truth about the situation.

As the recent surge in anti-Semitism enabled by both politicians and journalists that spread lies about Israel has shown, there is more here at stake than Israel’s reputation. Instead of thinking of it as a niche concern, the impact of the willingness of major outlets to engage in the delegitimization of Israel must be treated as an issue that is essential to the fight for Israel and the safety of the Jewish community.

Lipstadt poised to battle scourge on all fronts

Hundreds march at GW against Jew-hatred