Skirting the line between a lukewarm friend and an enemy

Fine line or red line between ‘friend’ and foe 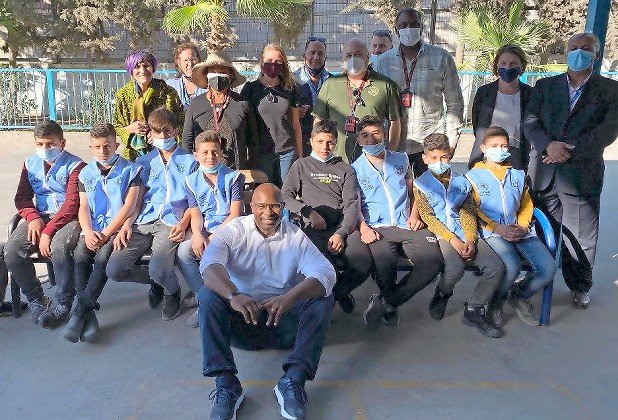 At center-front: Rep. Jamaal Bowman, along with other members of Congress, meet with Palestinian children in Hebron as part of a delegation organized by J Street on Nov. 10.
Jamaal Bowman/Twitter

Bowman was praised for visiting Israel. But his alliances with anti-Zionists and disturbing stands illustrate the dubious nature of the search for friends of the Jewish state on the far-left.”

Bowman’s alliances with anti-Zionists illustrate the dubious nature of the search for friends of the Jewish state on the far-left.”
By Jonathan S. Tobin

Both of the following things can be true: Israel needs all the friends it can get, including those who don’t always support its policies. At the same time, giving a pass to those who traffic in distortions about the conflict between Israelis and Palestinians, as well as legitimizing groups who are openly anti-Semitic, is a profound mistake.

That’s the dilemma presented to the pro-Israel community by the ongoing battle to win the heart and mind of the freshman Democrat who represents Riverdale and southern Westchester in Congress, Rep. Jamaal Bowman.

Bowman considers himself part of the left-wing “Squad” headlined by Queens-Bronx Rep. Alexandria Ocasio-Cortez and Reps. Ilhan Omar (D-Minn.) and Rashida Tlaib (D-Mich.). He is also someone who seems to want to have it both ways on issues relating to the State of Israel. And in a political environment in which support for the Jewish state is increasingly rare on the left-wing of the Democratic Party, getting Bowman — who like AOC is affiliated with the Democratic Socialists of America — to move closer to a position of support, however tentative, has become a priority for supporters of Israel.

Democrats who care about the Jewish state are worried about the disturbing trend in which the party’s activist base has become increasingly enthralled by intersectional ideology. That has led many among the Democrats’ left-wing core voter group to buy into the false idea that the Jewish state is an expression of white privilege bent on oppressing a suffering Palestinian people.

So when Bowman agreed to join a mission to Israel led by the left-wing J Street lobby, it was viewed as a big win for liberal Zionists. The mere presence of Bowman on the tour, which included visits with Israeli Prime Minister Naftali Bennett and Foreign Minister Yair Lapid, caused a stir, especially with his fellow Socialists.

The response from the DSA was instructive. Bowman was roundly condemned by the group. Many of its chapters wanted to expel him. They were not just furious about the visit but also “disappointed” by his refusal to embrace the BDS movement, his talk about Israel’s right to exist and his vote for US funding for the Iron Dome air-defense system earlier this year.

That, in turn, generated enormous sympathy for Bowman from many Jews. A group of rabbis and activists from Westchester and the Bronx signed a joint letter commending his visit to Israel, as well as his willingness to resist pressure from the far-left on the issue.

In the end, the DSA decided not to throw out Bowman. In a statement that reflected a pragmatic approach rather than one of inflexible doctrine, the DSA decided to give Bowman a pass for his heresy. They understood that he had not entirely repudiated their beliefs. On the contrary, they noted that Bowman was far more closely aligned with their anti-Zionist stance than some of the congressman’s Jewish supporters seemed to either realize or acknowledge.

Their statement asserted that: “We recognize the threat that Bowman and other members of the Squad pose to the Zionist lobby and the important role DSA can play with them in advancing Palestinian rights and anti-imperialist struggle at the federal level. Already, we have seen considerable movement from Representative Bowman and his office.”

The DSA isn’t wrong about that. While they would probably prefer that Bowman join Omar and Tlaib in support of the anti-Semitic BDS movement, they realize that the love he’s getting from Jews can be a useful tool for enemies of the Jewish state. While many Jews were extolling Bowman’s support for Israel’s right to exist, the Jewish state’s foes were actually more than happy about much of what he said about it after he returned home.

In line with his support for measures limiting or placing qualifications on US military aid to Israel, Bowman excoriated Israel’s government once back in the United States. In an event where he answered questions from college students, the congressman said: “I left less optimistic about a two-state solution because of the reality on the ground. Of course, I still believe in it and [in] working toward making it happen, but I think the US has to make some very bold moves that don’t even have to be related to threats, in my opinion.”

That was backed up by some of Bowman’s tweets during the visit, all of which were focused on “ending the occupation.”

This support for US pressure on Israel to withdraw from territory regardless of whether it will bring peace reflects Bowman’s belief in intersectional myths about the Palestinians being somehow morally equivalent to African-Americans struggling for civil rights during the Jim Crow era. But it is equally a product of his ignorance about Palestinian responsibility for the ongoing conflict and their consistent rejection of compromises that would have given them an independent state, as well as of the legitimacy of a Jewish state, no matter where its borders were drawn.

At the same event, he also seemed to assert that the Jews have become deranged by their memories of the Holocaust, saying, “I felt a tension in Israel, from the Jewish community, the psychology of occupation impacted the Jews. … There’s a history of complex trauma that people are living with every day. Yad Vashem brought that home to me.”

While Bowman claims to support Israel’s right to exist, he fails to understand that when Palestinians speak of “occupation,” they’re not referring to the West Bank but to all of Israel, whose cities and towns are all illegal settlements in the eyes of anti-Zionists.

By going to Israel rather than endorsing boycotts, Bowman is generating legitimacy for his views that are far closer to support for the “apartheid state” lies than a genuinely nuanced stance that advocated for a revival of the moribund peace process.

Nevertheless, pro-Israel activists believe that the distance he has created between his views, and those of Omar and Tlaib, gives them an opportunity to wean left-wing Democrats away from the radicals.

They are right to think that groups like AIPAC must never cease to search for and cultivate allies wherever they can be found. But the notion that Bowman deserves the kind of support he’s gotten from Jewish activists in the wake of his spat with the Socialists is mistaken.

While his position is preferable to that of Omar’s and Tlaib’s, that’s not saying much. Israel needs real allies. It doesn’t need “friends” who claim to support its right of self-defense but treat every reasonable policy aimed at saving lives from terrorism as brutal oppression, and who view those who wish to destroy the Jewish state as innocent victims.

Engaging with someone who thinks there’s nothing wrong with being part of a group like the DSA that opposes Israel’s existence is complicated. Building a bipartisan pro-Israel coalition is necessary, and ultimately, the goal should be to wean Bowman away from his leftist colleagues. That effort might be jump-started should Bowman — who won his seat by defeating Eliot Engel, an ardent supporter of the Jewish state — be opposed by a more radical opponent of Israel next year in a Democratic primary.

Still, liberal Zionists should not be deceived by the willingness of some on the left to bash Bowman for not being a hardcore backer of efforts to destroy Israel. The love they’re giving to someone whose positions are not all that different from those on the hard left makes it more difficult to persuade other Democrats to fully embrace positions that are essential to bolstering Israel’s security.

Rather than reviving a bipartisan consensus in support of Israel, the growing influence of people like Bowman more or less guarantees that it is as dead as Jewish Republicans claim it to be. Though his position is better than that of full-throated opponents, it’s necessary for pro-Israel activists to understand that with friends like Jamaal Bowman, enemies become superfluous.