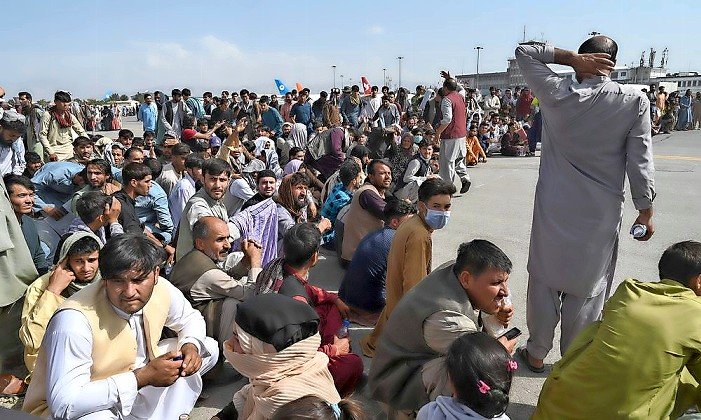 Afghanis pictured on Aug 18 during the aftermath of the Taliban takeover of Kabul.
John Smith 2021/Shutterstock

The fall of Kabul to the Taliban is a stark reminder that Israel must never rely even on its closest allies.”
By James Sinkinson

Every concession Israel has made for peace since the Oslo Accords in 1993 has been based on international assurances that such actions would bolster the Jewish state’s security—and that the international community would ensure nothing was permitted to harm the safety of Israelis.

From the Oslo Accords, which brought Yasser Arafat and tens of thousands of his terrorist friends to Israel, to released Palestinian terrorists who carried out more murderous attacks, and finally to Israel’s Gaza disengagement in 2005, which provoked thousands of rockets attacks, few if any of Israel’s concessions—all “guaranteed” by the international community—have increased Israel’s security.

The scenes the world witnessed in Kabul as the west, led by the United States, abandoned Afghanistan, allowing the Taliban to sweep across the country, should serve as a refresher course.

During Israel’s early years, especially with its stunning victories in 1948 and 1967, the Jewish state was largely abandoned by much of the world to fight its own battles. For many of these years, Israel suffered from an American arms embargo.

The United States tried to remain neutral between Israel and the surrounding Arab nations, all of which preached and sought genocide against the nascent Jewish nation. Intelligence and security experts in the West assumed that Israel would not survive, but were proven dramatically wrong.

After the Six-Day War in 1967, the United Nations Security Council passed Resolution 242, which became the foundational pillar for the concept of “peace for withdrawal.” The idea, led by the United States and the United Kingdom, was that Israel would retreat from territory gained in its defensive wars against invaders such as Jordan in exchange for some amorphous peace.

Since that time, Israel has retreated from territories many times its own size—from the Sinai, Lebanon, Gaza and large parts of Judea and Samaria. Following each withdrawal, no border could be described as peaceful. Rocket attacks have regularly emanated from Lebanon and Gaza, and hundreds of Israelis were murdered in terror attacks originating in Judea and Samaria—formerly controlled by Israel but handed over to Palestinian Authority control in the 1990s.

Israel’s Gaza disengagement is a good example of American security assurances that never came to pass. As then-Israeli Prime Minister Ariel Sharon said on multiple occasions in the lead-up to the withdrawal, he predicated the plan on promises made by President George W. Bush.

Sharon and other Israeli officials were told that removing all Israelis from Gaza would ensure it became peaceful and secure, and that should attacks emanate from there, the United States and its allies would give Israel a free hand to respond as forcefully as necessary. Of course, neither promise materialized, and to this day the Israeli military is hog-tied by hysterical international condemnation every time it tries to defend itself from Hamas terror.

The recent collapse of Afghanistan should be a wake-up call for major allies of the United States, and especially Israel. While the United States and Israel are inseparable allies with strong relations based on shared values and mutual interests, it only goes so far. As former US Secretary of State Henry Kissinger once famously said: “America has no permanent friends or enemies, only interests.”

In other words, while the United States has strong alliances around the world, its interests trump everything else. This is how every nation should and does act.

The State of Israel should bear this in mind the next time it is pressed to make a concession.

Israel has always taken pride in the fact that it has never asked any foreign army to fight its battles. It understands it must defend itself, by itself. Unfortunately, on far too many occasions Israel has agreed to international forces that promise to impose cease-fires and ensure security for Israel.

First it was EUBAM, a multinational European force meant to stop arms coming into the Gaza Strip from the Sinai after the disengagement, which ran away at the first sign of threats by Palestinians. In addition, there is UNIFIL, the peacekeeping force in Lebanon which to this day stands by and watches as Hezbollah fields and launches rockets and ground attacks into Israel.

In fact, there are zero examples of non-Israeli forces who have helped ensure the safety of Israelis.

Truth is, the United States itself has often been a tentative or unreliable protector. It did nothing to stop Saddam Hussein’s development of nuclear weapons in Iraq. Thankfully, Israel took out the Iraqi reactor at Osirak on its own in 1981.

Nor did the United States do anything to stop Iran from massive military build-ups in Syria and Lebanon. Fortunately, Israel has conducted more than 1,000 missile strikes in recent years against Iran and its allies in Syria. Israel is also the only obstacle to the Iran-funded Lebanese Hezbollah army.

No wonder the scenes in Kabul do not shock Israelis, who remember the failed promises from their territorial retreats from Gaza and Lebanon. They have seen how quickly Islamic fundamentalists fill the gap once the west has had enough. This latest example should make them clear-eyed and determined not to rely on the aid and assistance of others—not even their greatest ally, the United States

As former Israeli ambassador Arthur Lenk tweeted after the fall of Kabul: “The USA is our closest ally. They have been there for Israel time & again over the years. But the horrific events in Afghanistan must be a hard, scary lesson about changing interests & cold, hard calculations. Dangerously, in 2021, self-reliance is more important than ever.”

Israel must return to something approaching total self-reliance. It should maintain its strong alliances with nations around the world, above all, the United States. However, Israel should take definitive steps that ensure its own safety, security and independence.

Israel should be especially skeptical when being pressed by Western powers into further concessions toward the Palestinians. It is certain that no Western nation will raise its fist when Palestinian terrorist groups start launching missiles at Israeli civilians from the West Bank.

Zionism’s mission for the Jewish people—after 2,000 years of dispossession and oppression—is to be completely sovereign in their own ancestral, indigenous homeland. This means taking control of their own future and not relying on anyone else to secure it. It’s a hard lesson, but one we must embrace. The collapse of Afghanistan provides a new dose of reality.