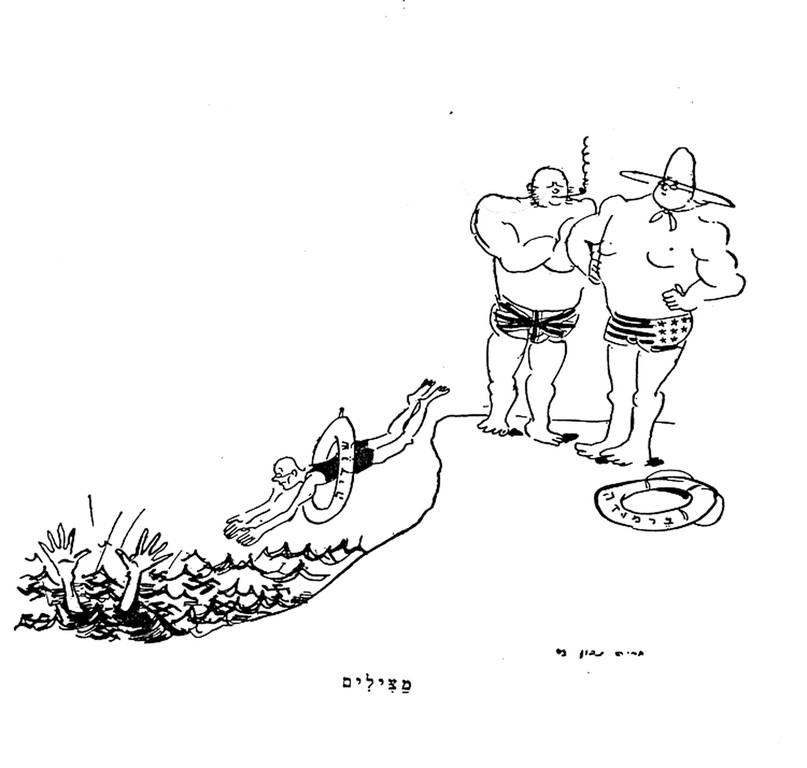 This 1943 cartoon by Arie Navon contrasts the rescue of Denmark’s Jews with the farcical refugee conference that the Allies staged earlier that year in Bermuda. Its Hebrew title means both “lifeguards” and “rescuers” — the lifeguards, smoking a Churchill-style pipe and wearing Roosevelt-style glasses, are standing next to an unused life preserver labeled “Bermuda.” The scrawny man diving into the swastika-infested ocean to rescue a drowning person is labeled “Sweden.”
Courtesy forthcoming book “Cartoonists Against the Holocaust,” by Rafael Medoff and Craig Yoe
By Rafael Medoff, JNS.org

As the final minutes of Rosh Hashana ticked away, 13-year-old Leo Goldberger was hiding, along with his parents and three brothers, in the thick brush along the shore of Dragor, a small fishing village south of Copenhagen. The year was 1943, and the Goldbergers, like thousands of other Danish Jews, were desperately trying to escape an imminent Nazi roundup.

“Finally, after what seemed like an excruciatingly long wait, we saw our signal offshore,” Goldberger later recalled. His family “strode straight into the ocean and waded through three or four feet of icy water until we were hauled aboard a fishing boat” and covered themselves “with smelly canvases.” Shivering and frightened, but grateful, the Goldberger family soon found itself in the safety and freedom of neighboring Sweden.

For years, the Allied leaders had insisted that nothing could be done to rescue Jews from the Nazis except to win the war. But in one extraordinary night, 70 years ago next month, the Danish people exploded that myth and changed history.

When the Nazis occupied Denmark during the Holocaust in 1940, the Danes put up little resistance. As a result, the German authorities agreed to let the Danish government continue functioning with greater autonomy than other occupied countries. They also postponed taking steps against Denmark’s 8,000 Jewish citizens.

In the late summer of 1943, amid rising tensions between the occupation regime and the Danish government, the Nazis declared martial law and decided the time had come to deport Danish Jews to the death camps. But Georg Duckwitz, a German diplomat in Denmark, leaked the information to Danish friends. Duckwitz was later honored by Yad Vashem as one of the Righteous Among the Nations. As word of the Germans’ plans spread, the Danish public responded with a spontaneous nationwide grassroots effort to help the Jews.

The Danes’ remarkable response gave rise to the legend that King Christian X himself rode through the streets of Copenhagen on horseback, wearing a yellow Star of David, and that the citizens of the city likewise donned the star in solidarity with the Jews.

The story may have had its origins in a political cartoon that appeared in a Swedish newspaper in 1942. It showed King Christian pointing to a Star of David and declaring that if the Nazis imposed it upon the Jews of Demark, “then we must all wear the star.” Leon Uris’s novel Exodus, and the movie based on that book, helped spread the legend. But subsequent investigations by historians have concluded that the story is a myth.

On Rosh Hashana — which fell on Sept. 30 and Oct. 1 in 1943 — and the days that followed, numerous Danish Christian families hid Jews from Holocaust persecution in their homes or farms, and then smuggled them to the seashore late at night. From there, fishermen took them across the Kattegat Straits to neighboring Sweden. This three-week operation had the strong support of Danish church leaders, who used their pulpits to urge aid to the Jews, as well as Danish universities, which shut down so that students could assist the smugglers. More than 7,000 Danish Jews reached Sweden and were sheltered there until the end of the war.

Esther Finkler, a young newlywed, was hidden, together with her husband and their mothers, in a greenhouse. “At night, we saw the [German] searchlights sweeping back and forth throughout the neighborhood,” as the Nazis hunted for Jews, Esther later recalled. One evening, a member of the Danish Underground arrived and drove the four “through streets saturated with Nazi stormtroopers,” to a point near the shore.

There they hid in an underground shelter, and then in the attic of a bakery, until finally they were brought to a beach, where they boarded a small fishing vessel together with other Jewish refugees. “There were nine of us, lying down on the deck or the floor,” Esther said. “The captain covered us with fishing nets. When everyone had been properly concealed, the fishermen started the boat, and as the motor started to run, so did my pent-up tears.”

Then, suddenly, trouble. “The captain began to sing and whistle nonchalantly, which puzzled us. Soon we heard him shouting in German toward a passing Nazi patrol boat: ‘Wollen sie einen beer haben?’ (Would you like a beer?)—a clever gimmick designed to avoid the Germans’ suspicions. After three tense hours at sea, we heard shouting: ‘Get up! Get up! And welcome to Sweden!’ It was hard to believe, but we were now safe. We cried and the Swedes cried with us as they escorted as ashore. The nightmare was over,” Esther recalled.

States. The Roosevelt administration had long insisted that rescue of Jews from the Nazis was not possible. The refugee advocates known as the Bergson Group began citing the escape of Denmark’s Jews as evidence that if the Allies were sufficiently interested, ways could be found to save many European Jews.

The Bergson Group sponsored a series of full-page newspaper advertisements about the Danish-Swedish effort, headlined “It Can Be Done!” On Oct. 31, thousands of New Yorkers jammed Carnegie Hall for the Bergson Group’s “Salute to Sweden and Denmark” rally.

Keynote speakers included members of Congress, Danish and Swedish diplomats, and one of the biggest names in Hollywood—Orson Welles, director of “Citizen Kane” and “The War of the Worlds.” In another coup for the Bergson Group, one of the speakers was Leon Henderson, one of President Franklin Delano Roosevelt’s own former economic advisers (Henderson had headed the White House’s Office of Price Administration).

In blunt language that summed up the tragedy—and the hope—Henderson declared: “The Allied Governments have been guilty of moral cowardice. The issue of saving the Jewish people of Europe has been avoided, submerged, played down, hushed up, resisted with all the forms of political force that are available… Sweden and Denmark have proved the tragedy of Allied indecision… The Danes and Swedes have shown us the way… If this be a war for civilization, then most surely this is the time to be civilized!”

Dr. Rafael Medoff is director of The David S. Wyman Institute for Holocaust Studies, in Washington, D.C. His latest book is “FDR and the Holocaust: A Breach of Faith.”