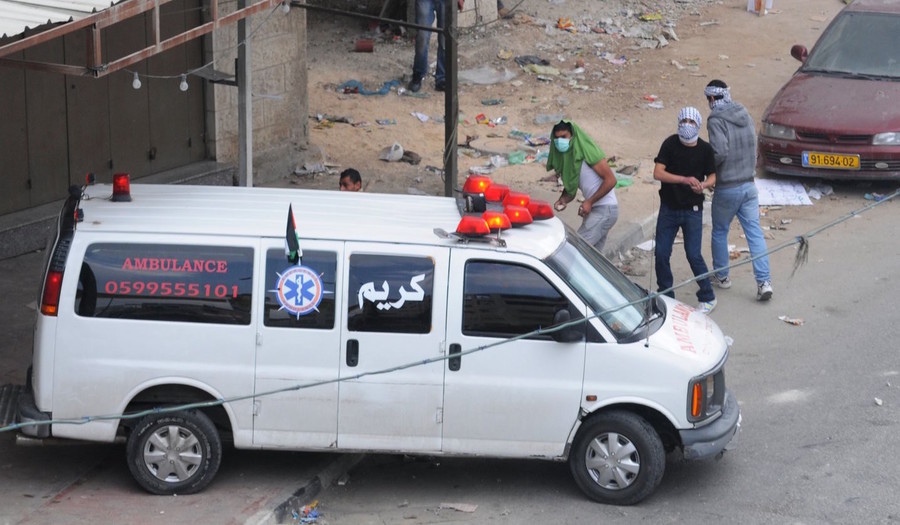 Palestinians throw rocks from behind an ambulance during a riot in Qalandiya.
IDF
By Stephen M. Flatow

On a recent Friday, several-dozen Jewish hikers happened to pass near the Palestinian village of Kobar. Some locals reacted to the sight of Jews by trying to stone them to death. News reports noted that Kobar is the hometown of the terrorist who recently stabbed three Jews to death at their dinner table in the town of Halamish.

On Aug. 12, Palestinians attending a funeral of a dead terrorist decided they would try to complete his life’s mission by murdering some Jews themselves. They gathered on the road near the Israeli town of Tekoa and began blocking oncoming traffic.

Arab drivers were stopped to see if they had Jewish passengers. If not, they were allowed to pass. Jewish drivers were assaulted with huge rocks and other objects. In the footage of the incident that was broadcast on Israel’s Channel 2, you can see some of the attackers were armed with cinder blocks—those extremely heavy two foot-by-one foot blocks used for the construction of walls and the like.

On Aug. 13, an Israeli bus passing near the town of Karmei Tzur was ambushed by Palestinian rock-throwers. A 1-year-old Jewish baby was injured. Apparently she was guilty of being an “illegal baby settler.”

Three days, three attempts to execute Jews by stoning, an old tradition in the Middle East. At least 13 Israeli Jews, and two Arabs mistaken for Jews, have been murdered by Palestinian rock-throwers since the 1980s. Scores of others have been injured.

Palestinian Arabs who throw rocks at Jews know they can expect to be richly rewarded for their deeds.

Let’s start with the financial rewards. Thanks to the Jerusalem Center for Public Affairs, we know that an Arab who is imprisoned for attacking Jews receives a monthly salary of $400 from the Palestinian Authority (PA). That level of salary is for those jailed between one and three years, which would apply to rock-throwers who injure, but do not manage to kill, their victims.

A rock-thrower who succeeds in killing a Jew, and therefore is sentenced to 30 or more years in prison, receives a monthly salary of $3,400.

The financial rewards don’t stop there. After he completes his sentence, a rock-thrower who was imprisoned for one to three years receives an additional grant of $1,500. The size of the grant increases according to the length of his sentence. Let’s say a rock-thrower kills someone, is sentenced to life in prison, but then gets out in a prisoner exchange. The PA gives him a grant of $25,000.

Rock-throwing terrorists can rest assured that if they are killed while trying to stone Jews, their families will be rewarded by the PA. The family of an unmarried rock-thrower who is killed receives $100 monthly. The widow of a rock-thrower receives $250 each month, for life.

The rewards for rock-throwing are not only financial. The terrorists also enjoy a thick protective cordon of journalists, pundits and Jewish “peace” groups that will work overtime to make excuses for their murderous actions.

New York Times correspondent Diaa Hadid, in what allegedly was a news article, presented a rationalization for Palestinian rock-throwing: “Palestinians frequently argue that rocks and crude incendiary devices are among their only weapons to press for independence, and to defend themselves against Israeli forces during confrontations. For some young Palestinians in areas where there are frequent tensions, their use has become a rite of passage.”

Thomas Friedman, a columnist for the same newspaper, included rock-throwing in his list of types of “non-violent resistance” that he hopes Palestinians will carry out.

Arab Member of Knesset Ayman Odeh was invited to speak at J Street’s national conference soon after he told an Israeli Army Radio interviewer, “I cannot tell the nation how to struggle, where and which target to throw the rock. I do not put red lines on the Arab Palestinian nation.”

Hadid, Friedman and the leaders of J Street are lucky to live in the U.S. If they ever happen to be victimized by rock-throwers, they will enjoy the protection of a legal system that takes rock-throwing a lot more seriously than they do.

The most famous example involved three teenagers who threw rocks at cars on the Capital Beltway in Washington, in 1990, wounding 30 drivers or passengers, including a girl who suffered irreversible brain damage. The attackers were convicted of “assault with intent to murder” and each sentenced to 40 years in prison. The judge declined to view the attack as a “rite of passage.”

An editorial in the Washington Post at the time correctly asked, “What’s the difference between assault with a deadly weapon—a shooting—and assault with rocks that hit cars at potentially lethal speeds?” That’s a question that J Street and the folks at the New York Times should consider, too. I would be interested in their answer.

Stephen M. Flatow, a vice president of the Religious Zionists of America, is an attorney in New Jersey and the father of Alisa Flatow, who was murdered in an Iranian-sponsored Palestinian terrorist attack in 1995.