On Tisha B’Av, facing a new siege of Jerusalem 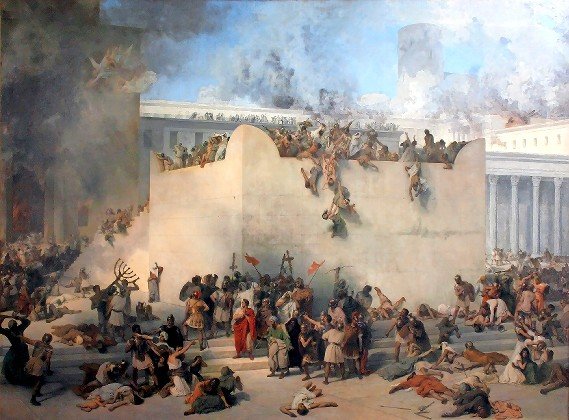 This 1867 represenation of the Roman destruction of the Temple in Jerusalem is by Italian artist Francesco Hayez.

We must avoid the mistakes of the past and ensure Jerusalem’s future as the capital of a Jewish state.”
By Hillel Fendel and Chaim Silberstein

As we commemorate the two destructions of Jerusalem and the Holy Temples this weekend, we have no choice but to see the parallels between then and now.

It is critical for anyone who wishes to have an impact on what Jerusalem will look like in the coming years to know the basics of what happened 2,000 and 2,500 years ago, respectively. Our Sages of the Talmud, who lived just before, during and after the Roman destruction of the Second Temple and the gradual loss of Jewish near-sovereignty in the Holy Land, had a very clear take on the matter: Baseless hatred among the Jews, in its various manifestations, led to the Roman destruction of Jerusalem. Towards the end of the First Temple period, there were the cardinal sins of murder, incest and idol worship.

The Sages instituted fasts for the various milestones along the way. The 10th of Tevet marked the siege placed upon Jerusalem by the Babylonians; the 17th of Tammuz commemorated the breaching of the city walls, and then Tisha B’Av — which we commemorate this Saturday night and Sunday — mourned the actual burning of the Temple. Finally, the Sages instituted the Fast of Gedaliah (the 3rd of Tishrei) for the assassination of the erstwhile leader of the surviving remnants of the Jewish community and the dashing of all hopes for Jewish sovereignty for years to come.

Each of these events has its parallels to our contemporary situation.

Over the past 30-plus years, there has been a massive wave of illegal building in Arab neighborhoods of Jerusalem for the express purpose of creating geographic contiguity from Ramallah in the north to Bethlehem in the south. The goal is not merely to facilitate Arab travel and strengthen the Arab presence, but to de facto divide Jerusalem and create the capital of a Palestinian state on the ground.

This creeping Arab expansion is definitely having an effect, strangling the city’s urban development, very much like the Babylonian siege of Jerusalem long ago. Illegal Arab construction, unhindered by the enforcement of zoning laws, combined with the double whammy of a lack of housing solutions and employment opportunities for Jews, has long been closing in on us. For years, it has cost Jerusalem an average net loss of some 8,000 Jews a year.

In some places, the enemy has “breached” the walls. Within our city limits, two huge Arab neighborhoods, Kafr Aqeb and Ras Hamis, continue to grow wildly, unblocked by the security barrier. They have become Hamas strongholds, with high crime rates and almost no Israeli governance.

The growing Arab population in Jerusalem now stands at 40 percent of the total. In eastern Jerusalem, where the Palestinian Authority wishes to establish its “capital,” the number is nearly 60 percent. Will we wake up one day soon to a Hamas-backed mayor of Jerusalem?

But possibly these problems are just the symptoms of a deeper malaise, as they were in the days of the Holy Temple. We must ask ourselves: Are we sufficiently attached to each other? To Jerusalem? To our nationhood and sovereignty? To our age-old teachings and values?

Though those who live in Jerusalem are perpetual witnesses to countless acts of kindness on the individual, communal and even national levels, the headlines paint a different picture.

How is it that the personal rancor of certain party leaders can prevent us from electing a solid, unified government that sees the Jewish state as its most precious value? What happened to our historic love of Jerusalem, which we have vowed for millennia to verily pay for with our right arm? What happened to Zion — all of it — at the memory of which we sat and wept?

Is now, at Tisha B’Av, not the time to come together in love and commitment to each other and to everything the Holy Temples stood for?

What can we do to secure our capital, keep it unified and develop it with a large Jewish majority?

Clearly, dividing the city and handing over Arab neighborhoods to Palestinian Authority control will only aggravate the problem. Geographically and demographically-speaking, an Israeli withdrawal will strangle the city, leading not only to increased Jewish emigration (as occurred when the city was divided in 1949) but also to heightened immigration by Arabs to the Israeli side where they can continue to enjoy the full political rights that Israel grants them.

Security-wise, the void formed by an Israeli withdrawal would quickly be filled by Islamic terror forces, deployed just across streets or valleys from Jewish neighborhoods, while Israel’s ability to respond would be limited. Dividing the city would also place Jerusalem’s holy sites at the mercy of Islamic extremists, who have proven that freedom of access and worship are not on their to-do list.

The Jewish people and their state must do everything possible to prevent the modern destruction of our eternal capital. This requires a massive increase in Jewish housing, especially where it can create wedges in the Arab corridor between Ramallah and Bethlehem. In addition, employment opportunities must be enhanced, something that may soon take place at the rapidly-developing western entrance to the city.

But perhaps most important of all is the Jerusalem Shield Program’s proposal to expand the city’s municipal borders in order to increase its Jewish population. Satellite communities outside the current borders — such as Givat Ze’ev, Mevaseret Zion, Beitar Illit, Gush Etzion and Maaleh Adumim — should become part of a greater Jerusalem municipality. At the same time, Kafr Aqeb and the Shuafat refugee camp would be placed outside municipal borders, not as part of the Palestinian Authority, but rather as separate, new Israeli municipalities. In Jerusalem, this would change the 60/40 Jewish/Arab demographic ratio to 85/15.

When we mourn this weekend for the destruction of Jerusalem, it’s not for the brick-and-stone structures that were destroyed, but rather for the loss of our Temples, our capital and what they stood for.

Now that we are on the fast track towards rebuilding Jerusalem and sensing the footsteps of the Mashiach, it is incumbent upon us to make sure we preserve our gains and work together with brotherly, causeless love for a united, secure and Jewish Jerusalem.

With this, Tisha B’Av will truly turn from a day of mourning to one of joy and celebration. With unity and togetherness, it will come sooner than we think.