‘Mooch’ goes Jewish to stump for Trump in Israel 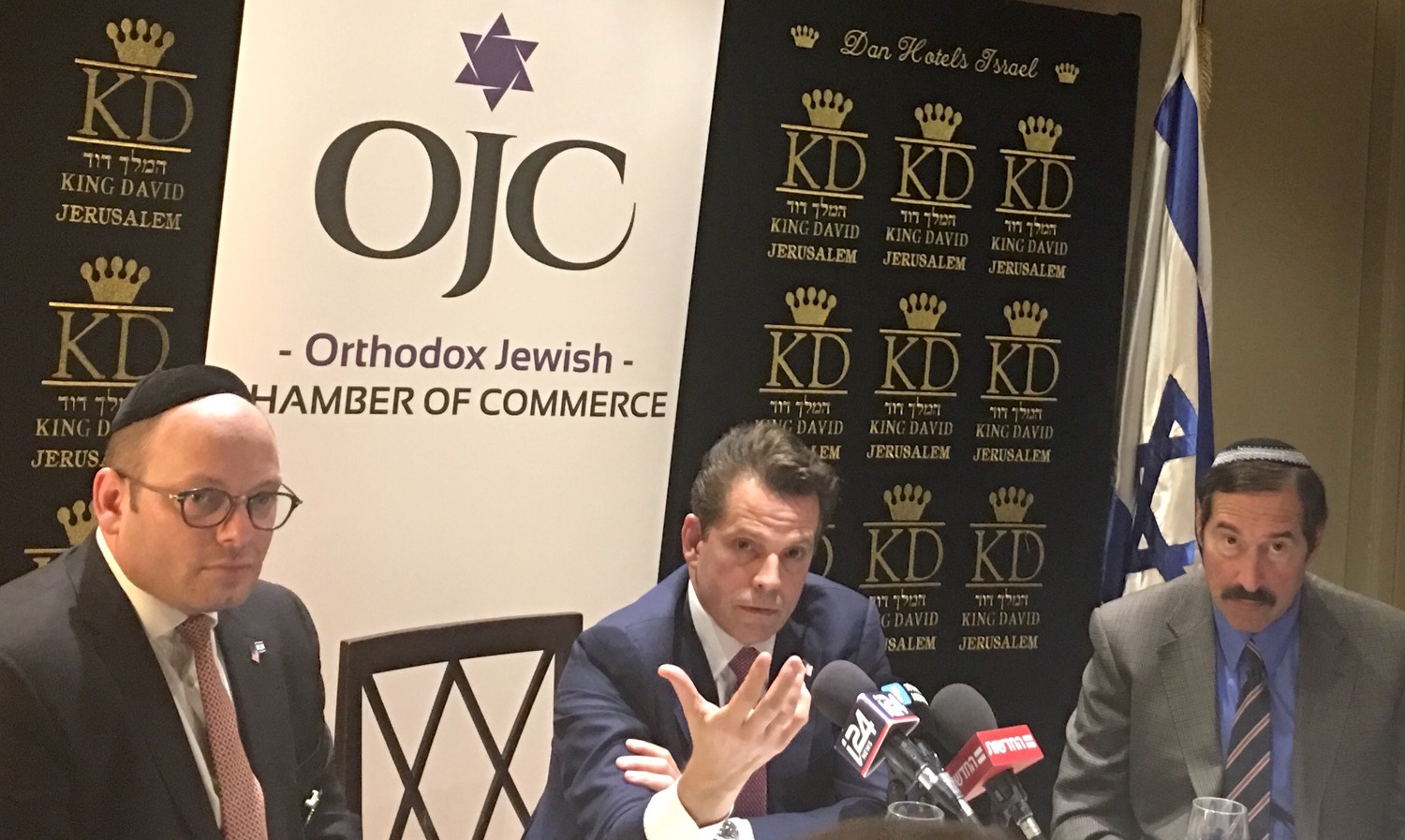 JERUSALEM — Anthony Scaramucci, the short-lived White House communications director, is not a member of the tribe. But he came close to declaring himself one during a visit to Israel last week.

“A few more days here and I’d probably convert to Judaism,” the Manhasset native joked to JTA. “They already did the circumcision back in ’64. There just wasn’t a mohel present.”

When he was not touting his Jewish ties on the trip, Scaramucci talked up the pro-Israel bona fides of his former boss, President Donald Trump. He revealed that he hopes to work for him again — and in fact never really stopped.

Scaramucci had come to Israel two days earlier as a guest of the Orthodox Jewish Chamber of Commerce, a New York area-based group that promotes business opportunities and aims to influence public policy. A former Wall Street financier and accomplished entrepreneur known as “The Mooch,” he has scoped out investment opportunities in Israel’s renowned high-tech industry.

While that work was done in private, Scaramucci repeatedly spoke publicly about his fond feelings for the Jewish people.

At a news conference at the King David Hotel in Jerusalem, he described Judaism’s culture as “unbelievable” and “beautiful,” and credited the mother of his Jewish high school friend with putting him on the path to success.

“His mom forced us to study before we could eat, before we could play sports, before anything else,” he recalled. “I can tell you I grew up in a neighborhood where none of the Italian kids were studying, and without her help, I don’t think I ever could have gotten to Tufts University.”

At Tufts, Scaramucci said, he took a course on Yiddish literature.

“And I can tell you, I am one of the few goys out there that knows the difference between a sheigetz and a shiksa, he said, using Yiddish terms for non-Jews.

He went on to call Israel a gift from “Hashem himself” and the Jew’s promised land. Despite not being Jewish, he said, this is his third trip to the country, which he supports on principle.

Scaramucci wrapped up the news conference with a rendition of the Hebrew Shehecheyanu prayer.

He told JTA he had rehearsed for “about half an hour with all my Jewish friends before I got up there.”

A day earlier, Scaramucci visited the nearby Yad Vashem-The World Holocaust Remembrance Center, where he donned a kippah and vowed to do his part to make sure a Jewish genocide never happens again.

“Never can there be this kind of atrocity, this injustice to humanity, this lack of proactivity to prevent something like this,” he told Arutz Sheva. “I have five children, varying ages, I hope to bring them all here so they can see this as well.”

Scaramucci joined Trump’s team in July after a career in capital management. He quickly drew attention — and ridicule — for his brash rhetoric and threats to crack down on White House leakers. His term ended before he could be officially installed after he gave a foul-mouthed, on-the-record interview to the New Yorker in which he maligned White House strategist Steve Bannon and other staffers.

Although Scaramucci was fired from his White House job after just 11 days, he said he remains friends with many administration members — including Ambassador to Israel David Friedman — and keeps in touch with them.

Scaramucci told JTA he plans to return to politics next year by helping Trump with his re-election campaign. He said he does not expect that work to lead to a role in the administration, but he dismisses the suggestion that he should put his rhetorical skills to work for a political career of his own.