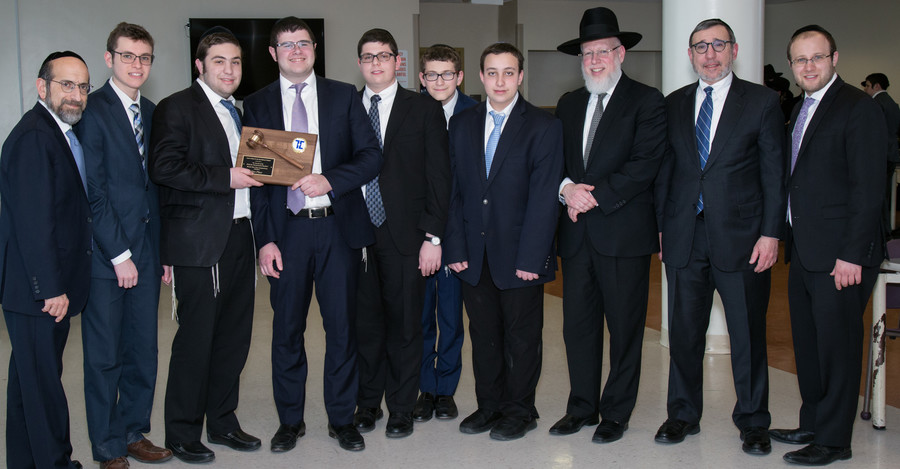 In 1941, hundreds of students from European yeshivos traveled to the Far East to escape Nazi persecution. Before reaching Shanghai, they temporarily settled in Kobe, on the Japanese island of Honshu. Realizing that they may have crossed the international dateline, many observed two days of Shabbos each week.

Was this the right decision?

“The Model Beis Din guides students to fully understand the dynamic nature of halacha—how the Torah can inform and confront contemporary moral and legal challenges in the most sophisticated way,” said Rabbi HaRav Yonason Sacks shlita, Rosh HaYeshiva of the Beis Medrash L’Talmud, who directs the program. “My goal is to validate the students’ learning and to inspire them to learn more.”

Teams came from DRS Yeshiva High School in Woodmere; Rambam Mesivta in Lawrence; Torah Academy of Bergen County in Teaneck; Atlanta Jewish Academy; the Mesivta of Greater Philadelphia, and Yeshivah Ohr Yisrael-Boston. Each high school received details of the scenario in September, along with a packet of relevant halachic sources. A rabbinic faculty member or volunteer at each school served as an advisor for the teams and helped students study relevant texts and craft their arguments.

After months of research and debate practice, it all came down to the daylong competition.

“Preparing was intense,” said Abe Schoen, a student at Atlanta Jewish Academy. The first step was trying to understand the complexities of the case. Then we had to figure out how it fits with all that we have learned previously. The model Beis Din definitely improved my analytical skills and comprehension of halachic law.”

“Our students can feel the inspiration here. They are learning college level material and being challenged to defend their positions,” said Rabbi Jacob Czuper, who advised the Atlanta team and is a Lander College for Men alumni.

The first round of the competition was a debate format, with each team assigned to argue one position—either supporting or opposing the court’s decision—against another school in front of four “judges” from the Beis Medrash L’Talmud faculty, Rabbi Ephraim Tanenbaum, Rabbi Aryeh Lebowitz, Rabbi Shmuel Marcus, and Rabbi Yonason Sacks.

In the second round, individual teams presented their arguments for what they believed to be the correct decision to the judges, who questioned the students as to how they arrived at this conclusion.

Dr. Moshe Sokol, dean of Lander College for Men, described the Model Beis Din as an opportunity for young Orthodox men to experience Torah study at an advanced level.

“We seek to demonstrate to students the broad reach of the Torah, which touches and transforms every dimension of life,” said Sokol. “The program inspires high school students to deepen their understanding of the chosen topic, while they challenge themselves by competing with other outstanding young men from across the country.”

After both rounds, the teams gathered in the Lander cafeteria to hear from the judges. Because the matter is still subject to debate, the winners were chosen based on the quality of the presentations and their mastery of the different opinions and Talmudic sources, as well as on how well they supported their findings.

Torah Academy of Bergen County (TABC) won the competition for the fourth time in a row. Their months of preparation, both in school and into the night on Google Hangouts, paid off. TABC student Joseph Solomon appreciated the accolade but said that it wasn’t all that mattered. “We are finding deeper understanding by learning together,” he said.

The Lander College for Men, an undergraduate division of Touro College established in 2000 and located in Queens, is grounded in a dual curriculum of intensive Torah study and a wide range of academic programs, and students major in professionally oriented disciplines. Lander College for Men provides students with an environment that produces ethical, mature, and well-rounded professionals committed to scholarship and career growth.

Dedicated to Touro’s mission of perpetuating the Jewish heritage, Lander College for Men prepares students to uphold the ideals of Torah and pursue positions of professional and communal leadership.