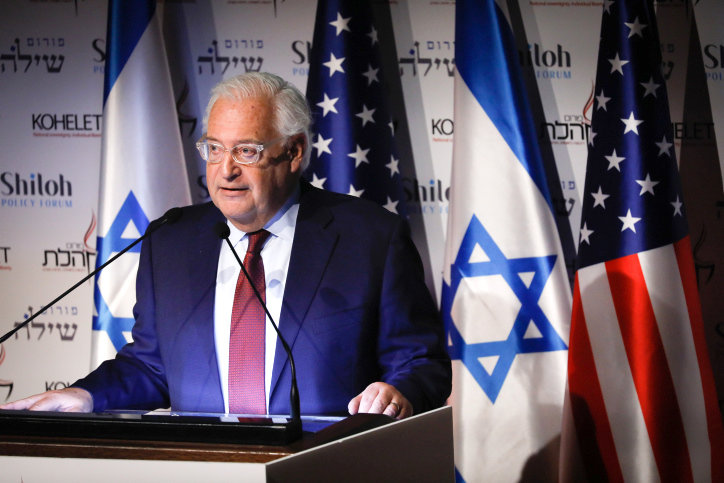 US ambassador to Israel David Friedman speaks during the Kohelet Forum Conference at the Begin Heritage Center, in Jerusalem on Jan. 8.
Olivier Fitoussi/Flash90
By Israel Kasnett, JNS

“That is important,” Pompeo said. “We’re disavowing the deeply flawed 1978 Hansell memo, and we’re returning to a balanced and sober Reagan-era approach.”

U.S. Ambassador to Israel David Friedman confirmed that U.S. policy now states that “Israelis, Jews have the right to live in Judea and Samaria.”

He highlighted three major long-standing issues that the Trump administration has changed. First, the U.S. officially recognized Jerusalem as the capital of Israel and moved its embassy there. Second, the U.S. recognized the Golan Heights as sovereign Israeli territory. Third, the U.S. has recognized that Israeli communities in Judea and Samaria do not violate international law.

Regarding the resolution of the Israeli-Palestinian conflict specifically in terms of Judea and Samaria, Friedman said “the proverbial goal posts have moved and moved, to the point today where they are no longer even on the field.”

Friedman said that in moving “the goalposts back onto the field,” the Pompeo Doctrine “does not obfuscate the very real issue that two million or more Palestinians reside in Judea and Samaria.”

It says “clearly that Israelis have a right to live in Judea and Samaria, but it doesn’t say the Palestinians don’t,” he said. “Rather, it calls for a practical negotiated resolution of the conflict that improves lives on both sides.”

In another significant announcement at the forum, Israeli Prime Minister Benjamin Netanyahu repeated his earlier pledge that his government “will not allow the uprooting of any community, Jewish or Arab, under any peace plan.”

“The principles are simple,” he said. “Israel has and will continue to have security control west of Jordan, Jerusalem will never be divided, and settlements will not be uprooted.”

Israeli Defense Minister Naftali Bennett told the conference that he is establishing a special task force to prevent illegal Palestinian construction in Israeli-controlled areas of Judea and Samaria, known as Area C. He also pledged to work to develop and legalize unauthorized outposts throughout Judea and Samaria.

Avi Bell, an Israeli professor of law at the University of the San Diego School of Law and at Bar-Ilan University in Ramat Gan, told JNS that what Pompeo said was “very simple and obvious.”

“The real question is why does he have to say it at all?”

Said Bell, “It is a wonderful act of courage for him to say that simple truth [that settlements are not illegal according to international law]. Of course they are not, per se, illegal.”

“American policy is now clearer than ever — Jews living in Judea and Samaria is not a crime,” Eugene Kontorovich, director of international law at the Kohelet Policy Forum, told JNS. “For decades, the obscure Carter-era memo was used as justification for anti-Israel policies, despite the fact that its conclusions were rejected by subsequent administrations.”

“Pompeo’s statement makes clear the U.S.’s wholesale rejection of the legal theory that holds that international law restricts Israeli Jews from moving into areas from which Jordan had ethnically cleansed them in 1949,” Kontorovich said. “The notion that it is not a war crime for Jews to live in the areas of Judea and Samaria is not rocket science. It is not an exotic position.”

Kontorovich suggested that it may be impossible get a fair hearing for Israel’s position since the international community has already made up its mind that settlements are illegal, and that Judea and Samaria is not “disputed,” but rather “occupied.”

“That treats our international and diplomatic rights like a game show. If international law were a game of ‘Survivor,’ we would have been voted off the island a long time ago,” he quipped. “But it is not. There are principles, and those principles need to be consistent across context, and they are demonstrable.”

“I hope soon other countries will also follow the visionary leadership of President Trump and Secretary of State Mike Pompeo,” he said.