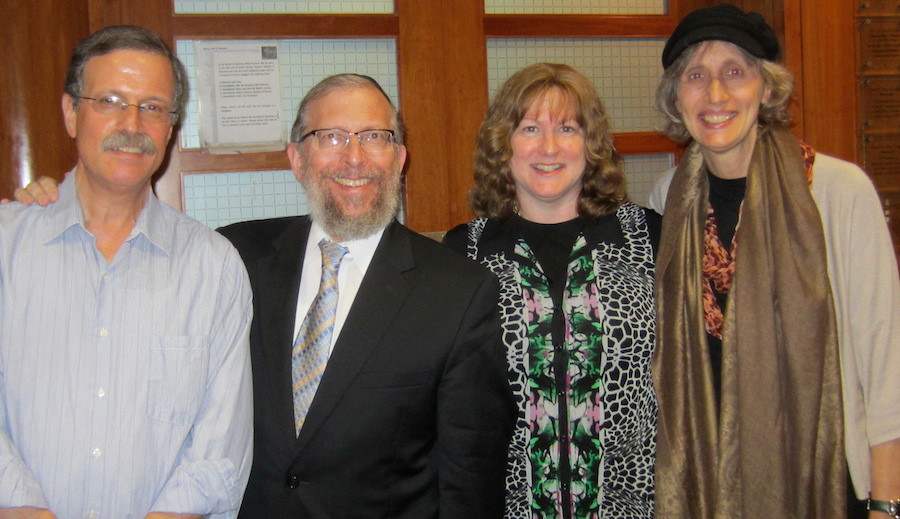 From left: Dan Gettinger, Rabbi Elimelech Goldberg, Ruthie Goldberg, and Roberta Gettinger on Saturday night. They are seeking volunteers to bring the program to LIJ Hospital.
Photo by Malka Eisenberg 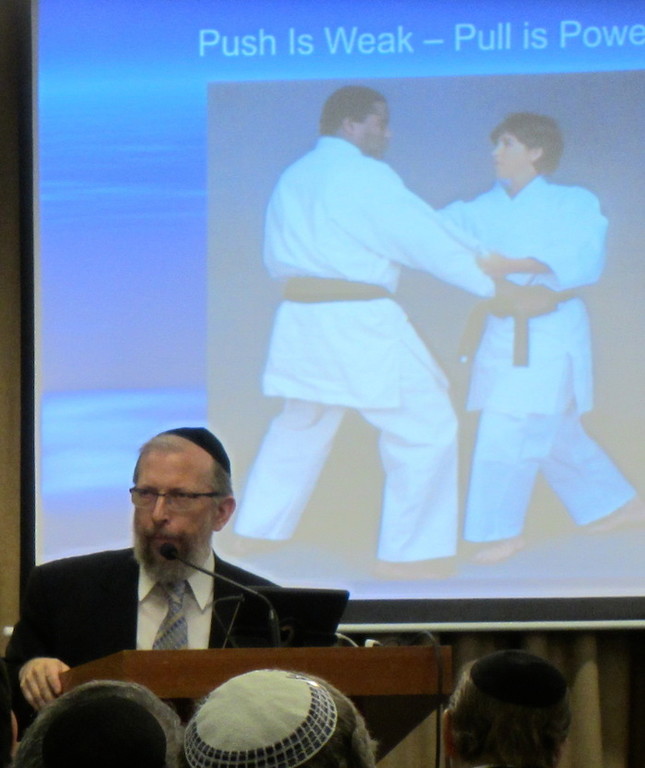 Hundreds came to the Young Israel of Woodmere on Shabbat Parshat Chukat, drawn by a dynamic speaker’s promise of controlling stress in their lives.

Rabbi Elimelech Goldberg, founder of Kids Kicking Cancer, spoke during Shabbat and then presented his “Breath Brake” seminar — “how to live longer and defeat stress in 60 minutes” — to more than 300 people on motzei Shabbat.

Kids Kicking Cancer empowers children undergoing cancer care — and “any issue of childhood pain” — by using martial arts techniques, and is making great strides in alleviating and controlling the pain of thousands, he said.

It uses Tai Chi breathing techniques “to stop stress and take control of your life,” he said. He instructed those who filled the Leon Meyer Bais Midrash to overflowing to inhale add an extra quick inhale and hold it to the count of three and slowly release the breath and forcing it out with a quick exhale at the end while relaxing the body.

A student of Rav Joseph B. Soleveichik and longtime member of the YU kollel — as well as a black belt in Karate — Rabbi Goldberg’s epiphany came while he was director of Chai Lifeline’s Camp Simcha.

When an “adult screams [in pain] the doctor finds another way to do things, with a kid they hold the kid tighter,” he said. When a child was screaming when the nurse was accessing his mediport for treatment at Camp Simcha, Rabbi Goldberg yelled, “Wait!” Everything stopped, he said, and he asked the nurse to “give me a second.”

He told the child that he was a black belt and asked if he wanted ”me to teach you karate. He almost jumped off the table.” Rabbi Goldberg taught him breathing techniques. When the nurse removed the needle after treatment, the child was unaware and felt no pain.

He began a pilot program at the Children’s Hospital of Michigan in 1990, but Rabbi Goldberg’s knowledge of cancer and children began earlier and was personal. “My wife and I lost our first child to leukemia 33 years ago,” he said. He was a Rebbe at Yeshiva University High School of Los Angeles at the time. “Kids didn’t heal well then.” Sarah Basya passed away at the age of two, in 1981.