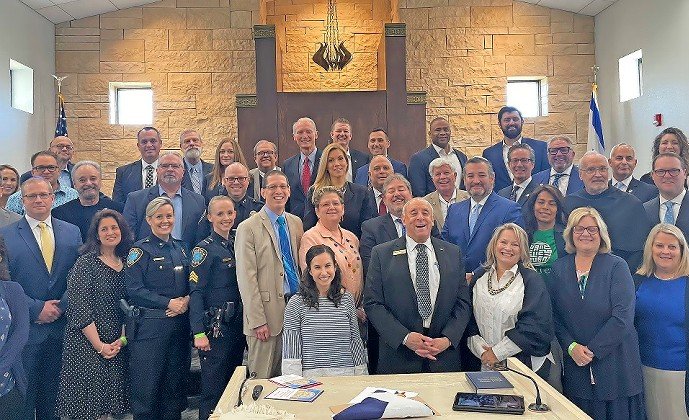 For many American synagogues, this High Holiday season will be the first with in-person services since 2019. They will also be the most crowded since the latest high-profile attack on American Jewry — the January 2022 hostage situation at Congregation Beth Israel in Colleyville, Texas.

It has many Jewish communal leaders thinking about safety and security.

“The holidays are the moment where the Jewish community, globally, really starts thinking about security because so many people are going to go to shul that maybe don’t necessarily always go,” Evan Bernstein, CEO and national director of Community Security Service(CSS), told JNS. He added that his organization has been working with congregations to refresh on best safety practices.

But while the High Holidays services typically bring about the highest attendance of the year, Bernstein and others in the Jewish security industry are making the issue of safety a year-round endeavor. As Bernstein points out, the overwhelming majority of the attacks on American Jewry have taken place outside the High Holidays.

“People who don’t like us and want to do bad things to Jews are not necessarily looking at the Jewish calendar to determine when they’re going to perpetrate something. We need to be on high alert at all times,” he said.

That perpetual state of alertness has the capacity to draw Jews away from focusing on their actual practice of faith and culture, while placing more and more attention on ensuring they are simply safe enough to do so, as anti-Semitic acts across the United States continue to mount.

“I think it’s getting harder and harder to have that balance. I was just in Europe meeting with our sister organizations in the UK, France, Belgium and the Netherlands, and those groups are always on alert. If you speak to those communities, there is no downtime. There is no moment where they can take that break,” said Bernstein, who fears what he calls the golden age of safety for American Jewry may have passed.

“I hate to say it, but you look at the number of major assaults, attacks on synagogues, murderous attacks on Jews over the last 5 to 10 years, it’s really unprecedented in American Jewish history. I don’t think we have the luxury of being able to sit back and have ebbs and flows. I think we need to maintain diligence, as hard as it is, as exhausting as it is. Times have changed and the American Jewish community needs to change with it. It’s an unfortunate fact,” he said.

Bernstein argues that American Jews must become more like their European brethren in relying less on law enforcement and private security, and instead taking more proactive measures, from situational awareness and proper security training to recruiting volunteers within the synagogue community to provide protection at services and other events.

“No one’s going to care more about who’s inside that synagogue than a volunteer is,” he said. “We as a Jewish community can’t just rely on outsourcing our security. If you look at what’s taking place in other Diaspora communities around the globe, Jews are the ones that are leading their security operations. I think the American Jewish population needs to start embracing that and get more engaged and be aware.”

Bernstein was quick to say that American Jewry has a great relationship with federal and local law enforcement, and it’s not something to take for granted. He noted that CSS works in tandem with partner organizations such as Secure Communities Network and the Jewish Federations of North America to “really cover all of our bases, which is so critical. I think that leads to better and more organized security.”

Ultimately, he said he doesn’t want to send a message of fear. American Jews, overall, should feel safe, especially those who became used to staying away from synagogues during the COVID pandemic.

“We should never let hate stop us from practicing our religion,” he said.

“We need to be active Jews. We need to go to the synagogue. We need to be doing everything we can to be proud about being Jewish in every way shape or form. But let’s be aware of security issues, of the threats from the right and from the left, not only for the holidays but every Shabbat.”