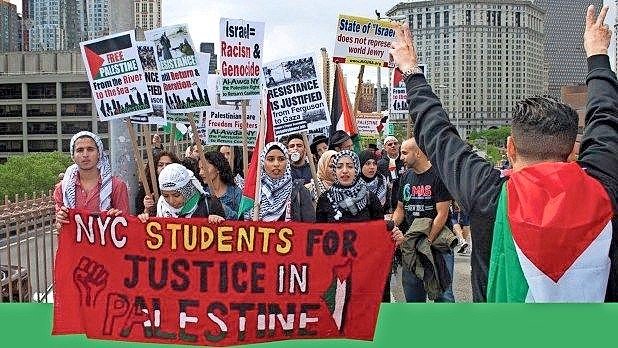 A Students for Justice in Palestine march in New York.
JCPA

Damage done to Jewish students by SJP is real, not theoretical. ”
By James Sinkinson

In his Israel Apartheid Week address at Duke University a few weeks ago, radical Palestinian poet Mohammed el-Kurd advocated “Palestinian liberation,” telling his cheering audience, “We want our land back from the [Jordan] river to the [Mediterranean] sea.”

When asked what would happen to 7 million Israelis who live on most of this land, el-Kurd replied, “I don’t care. I truly, sincerely, don’t give a [expletive],” prompting hooting, laughter and thunderous applause.

El-Kurd — who claims “Zionists have an unquenchable thirst for Palestinian blood” — and most other speakers at the anti-Israel event were sponsored by the notorious Students for Justice in Palestine (SJP).

SJP currently lists active chapters at some 200 US colleges and universities, and while the group officially claims to oppose anti-Semitism, its members and sponsored speakers routinely oppose Israel’s existence and support the BDS movement, both universally accepted hallmarks of anti-Semitism.

Ironically, the Duke student government recently voted to support the International Holocaust Remembrance Association (IHRA) definition of anti-Semitism, which condemns most ideas espoused at Israel Apartheid Week. In fact, apparently oblivious to the contradiction, the DSG spent $16,000 supporting the apartheid week program, including $5,000 for el-Kurd.

The Duke event serves as an alarming example of the Jew-hatred rampant on American campuses and the double standard applied to it — especially compared to the instant condemnation and “canceling” of any teacher, student group or speaker who offends other ethnic minorities.

The damage done to Jewish students by SJP members and its activities is real, not theoretical.

For Jews worldwide, Israel represents the pinnacle of national self-determination and refuge, the achievement of a millennia-long yearning of the Jewish people to return to its ancient homeland.

Yet SJP communications consistently accuse Zionists of being racist and assert that one cannot be a good Jew and support Israel. Jews are frequently barred from serving in student government or participating in social justice activities simply because they are Jewish and may sympathize with Israel.

This demonization of Jewish identity resembles nothing more than the ostracization of Jews during Hitler’s Third Reich.

Some 100 New York University law students recently demanded that their university condemn list-serv posts by NYU Law SJP and affiliated groups. These students correctly cited references to “Zionist-funded US and Western media,” the “Zionist grip on the media” and “Ashkenazi Jewish whiteness” as evidence of classic anti-Semitic racism.

A YouTube video of screaming SJP protesters at a 2017 pro-Israel event at UC Irvine gives a flavor of the thuggish, vitriolic tactics the group’s members employ. Speakers at that event — as at many such campus forums — had to be escorted from the venue by police to protect them from violence.

During an SJP-sponsored protest in New York City, student leaders of CUNY Law’s SJP chapter asserted that “Zionist professors are not welcome” on campus, and demanded that “Zionist students” be banned from “spaces where Palestinian students are.”

Not surprising, a recent survey by the American Jewish Committee revealed that almost 23% of American Jewish millennials agreed that the following statement describes their own views “very well” or “somewhat well”: “An anti-Israel climate, on campus or elsewhere, has forced me to hide my Jewish identity.”

According to a study conducted at Brandeis University, one of the strongest predictors of students perceiving hostility because of their Jewish or pro-Israel identity is the presence of an SJP chapter on their campus.

AMCHA, a non-profit that fights anti-Semitism on campus, reports that “SJP and other anti-Zionist student groups are a major source of anti-Semitic rhetoric and behavior at many schools. Reports analyzing anti-Semitic incidents … indicate a significant increase in actions which directly harm or threaten Jewish students, including physical and verbal assaults, destruction of property, harassment discrimination and suppression of speech, at schools with an SJP or similar anti-Zionist chapter.”

Despite SJP’s consistent promotion of anti-Zionist and anti-Jewish speech and its harassment of pro-Israel speakers, few of its chapters are ever censured, let alone shut down by school administrations or governments.

One exception is New York’s private Fordham University, which after many legal appeals was granted the right to ban SJP on its campuses because of the group’s threatening anti-Semitic activities.

At the New York Supreme Court, Fordham’s counsel, Jim Ryan, attested that Dean of Students Keith Eldredge did “extensive research” and had concluded that “SJP chapters regularly disrupted and interfered with students and campus operations. The promotion of BDS was the cause of many of the safety and security issues associated with other SJP chapters.”

Thus, the crisis on college campuses for Jewish students has two dimensions:

First, Jews and Israel are attacked relentlessly with anti-Semitic slander — both traditional tropes of Jew hatred (e.g., “Jews control the media”), as well as attempts to delegitimize (and therefore destroy) the Jewish state. Such attacks are usually excused by administrators as “mere” exercises of free speech.

Yet similar “free speech” attacks on black or transgender students would never be tolerated by administration officials, let alone by student governments. This free-speech double standard adds injury to insult for Jewish students.

Solution: Hate speech on campus must be regulated consistently and fairly. No exceptions for anti-Semites.

Second, most campuses permit harassment of Jewish students and pro-Israel speakers. While many schools pay lip service to “safe environment” and anti-harassment policies, they usually offer protection from violent speech disruption only if the victims are members of a protected class.

According to the interpretation of most schools, physical harassment of Jewish students for their support of Israel does not qualify for protection either under religious or ethnic grounds.

The obvious solution is to forbid — and harshly punish — all physical harassment or speech disruption of any member of the campus community, whether student, professor or visiting speaker.

We should make two things clear to university administrators and our elected representatives:

•It’s unjust to permit hate speech against Jews and the Jewish state on campus, while banning hate speech directed against other minorities

•All harassment or disruption of free expression on campus should be forbidden and strictly enforced.