It’s fall. Let’s do apples, all kinds of apples. 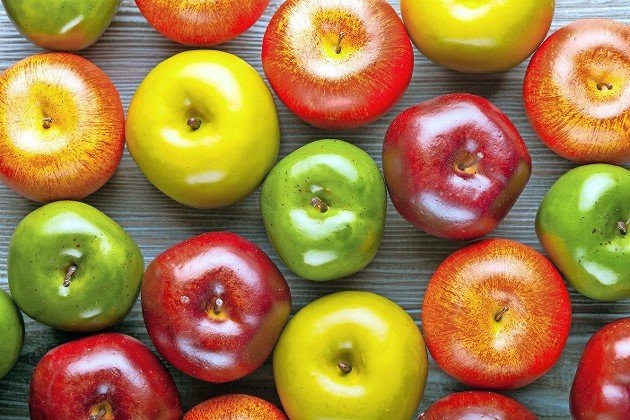 I clearly remember the first time we took our daughter apple picking because it was my first time also. (I must have missed those school trips.) She was about 2-1/2, so she naturally picked up the apples that had fallen on the ground and wanted to eat all of them.

The day was beautiful, a pure Indian summer afternoon in early October, and the sweet, spicy apple smell wafted through the air and made me hungry for crunchy fresh apples, apple pies and cider. I think I was more excited than our daughter was and, as a result, I filled many more bags than a family of three needed. We had Baldwins and MacIntosh, Cortlands and others.

I made enough applesauce to fill a bathtub and pies, cakes and cookies that I gave to anyone who would take them. For weeks my kitchen smelled like an apple orchard as we ate our way through the bags and bags I had taken home.

From that day forward, I never looked at apples in the supermarket the same way again. I became an apple snob and each year made trips to orchards near and far to pick the best that nature had to offer.

I began to learn a lot about apple trees and crops and why some years produce better apples than others. Too much rain, or too little rain, hurts the crops, as do temperatures that stay too hot into September. Did you know that apples are sweeter near the flower end of the fruit than at the stem end? More sugar develops near the flower to attract bees to pollinate the fruit.

Apples are among the oldest fruits on earth and there and hundreds of kinds of apples throughout the world. China produces half of the world’s apples; America is second with 6 percent, Turkey is third. My new favorite is Honeycrisp and we just picked a bushel a few weeks ago.

Over the years, the apples in the supermarkets have improved dramatically, but they cannot compare to a fresh-picked apple from an orchard. So, before it’s too late, go apple picking. Or, at the very least go to your local farm stand and buy them there. We have all winter to buy stored apples.

This is such a forgiving recipe that you can add anything to it. Try some butternut squash or any other squash and/or fresh cranberries. You can even add some a splash of bourbon and/or some apple cider instead of orange juice.

4 to 6 large apples a mix of Cortland, Granny Smith, Northern Spy, or other pie apples

Pour the yams and the carrots into a large bowl, add the lemon juice, toss and pour into the prepared baking dish. Cover tightly with foil and bake for about 20 minutes or until the veggies are barely fork tender. Remove from the oven and let cool.

Mix the brown sugar, orange juice, nutmeg and cinnamon in a small bowl and mix to blend. Mix the cornstarch and the water together, add to the orange juice mixture and mix well.

Peel the apples and cut them in half. Remove the core and cut the apple into thin slices, about one-quarter inch thick. Place the apples over and under the carrot mixture. Pour the juice mixture evenly over the casserole.

Mix the nuts with the sugar and melted butter. Pour evenly over the top and place in the oven. Bake until bubbly and the veggies are softened, but not mushy, about 35 to 45 minutes. If the nuts get too dark, cover the dish loosely with foil. Serves 6 to 10 (depends on how many carrots yams, etc., you use).

This is a delicious, fairly quick dinner.

1 to 2 cloves garlic, finely minced or pressed through a garlic press

Place each chicken breast between two sheets of waxed paper and pound with a mallet until even thickness of about 3/4 inch. Peel and thinly slice the onion and set aside. Finely mince the garlic and set aside.

In a large, flat bowl, mix the onion powder, thyme, salt, pepper and flour together. Heat a large skillet over medium heat and add the oil. Quickly dredge a chicken breast in the flour mixture and place in the hot oil. Repeat until all four pieces are in the skillet. Brown on each side about 2 to 3 minutes. Remove the chicken to a plate.

Add a bit more oil to the skillet if needed. Add the onion slices and sauté the onions until deep golden brown, about 5 to 8 minutes. Add the garlic and sauté another 30 seconds, until fragrant.

Move the onions to the side and add the apple slices. Cook until lightly browned then gently turn the apples and brown the other side. Add the apple cider and bring to a boil. Scrape up any browned bits with a wooden spoon. Let simmer for about 5 minutes to thicken and reduce the sauce. Add the apple cider vinegar and mix well. Taste and adjust the seasonings.

Add the chicken back to the pan, nestling it between the onions and apples so they are more on top of the chicken pieces. Cook for about 10 to 12 minutes, turning once. If the sauce is too thick, add a bit more cider.

Transfer the chicken to a platter and pour the onions and apples over the chicken. This is great over some aromatic rice, such as jasmine or Basmati. Serves 4.

The rosemary adds a nice depth of flavor to the applesauce. Make sure to remove it or the flavor may become bitter.

Place the cider, salt, rosemary and cinnamon sticks in a large saucepan. Bring to a boil and cook until the juice is reduced by about half, about 7 to 9 minutes. You can remove the rosemary sprigs at this point to wait for another step to add more rosemary flavor.

Add the apples to the cider and stir. Cover and reduce the heat to a simmer. Simmer for 10 minutes and remove the rosemary sprigs if you haven’t yet done so. Cover and cook for another 10 to 25 minutes or until apples are very soft and fall apart when stirred. Taste and add sugar mixing well and waiting a minute or two between tastes.

Remove the cinnamon sticks and use an immersion blender to mix the applesauce until you get your desired consistency from very smooth to chunky. Makes about 2 quarts.

I made a version of this when I first got married. Now I make it for grandchildren. Rich with apples, cinnamon and just a hint of maple syrup flavor, it is a favorite hot or cold.

6 apples (a mix of Cortland, HoneyCrisp) peeled and thinly sliced

Grease a 9x13 glass Pyrex-type pan. Sprinkle the cornflake crumbs on the bottom of the pan and shake to cover evenly. Set aside. Preheat the oven to 350 degrees.

Cook the noodles according to instructions, Drain and add to a large bowl. Add the butter in pieces and mix until melted. Add the rest of the ingredients and mix well. Pour into the prepared pan and spread evenly.

Mix the topping ingredients together and sprinkle evenly over the top. Bake at 350 for 35 to 45 minutes but check frequently. If the topping begins to burn, cover lightly with foil and continue to bake. Serve hot or cold.

Kitchen memories of both my mom and dad

Home, and some simple food, for the holiday