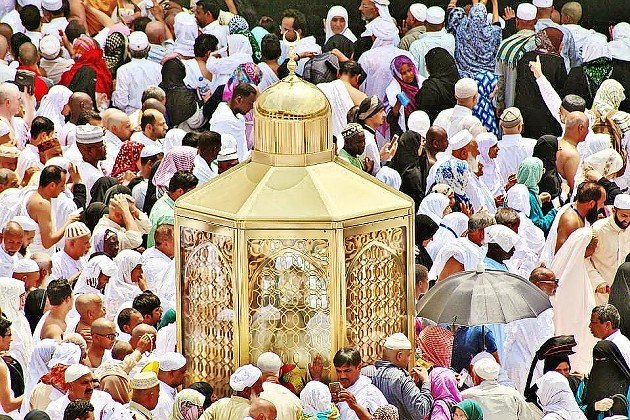 It’s hard to overstate the stupidity, arrogance and irresponsibility of doing this.”
By Melanie Phillips

We are accustomed to wars being waged in the name of religion. There’s less acknowledgment of the war being waged upon religion and on the religious mindset by Western secularists.

One example last week threatens to set back the delicate task of reconciling the Islamic world to Israel.

Gil Tamary, a journalist for Israel’s TV Channel 13, sneaked into Mecca and reported from there in a 10-minute segment. It’s hard to overstate the stupidity, arrogance and irresponsibility of both Tamary and Channel 13 in doing this.

Mecca is the holiest city in the Islamic world. It is home to the Kaaba, the most sacred site of all for Muslims and towards which they face in prayer. Mecca is barred to non-Muslims.

In his clip, Tamary visited Mount Arafat, where Muslim pilgrims gather to pray during the climax of the annual hajj pilgrimage to Mecca.

He made clear he knew exactly what he was doing by referring to the site as “a place forbidden to non-Muslims” and boasting, “I am the first Israeli journalist on the spot to broadcast these images — and in Hebrew.”

Maintaining that he wanted merely to “showcase the importance of Mecca” and the beauty of Islam, he claimed that the footage “allowed many people to see, for the first time, a place that is so important to our Muslim brothers and sisters.”

This was cynically self-serving. Tamary had merely pulled a journalistic stunt.

The day after the report was aired, both Tamary and Channel 13 issued statements saying they apologized if the segment had offended Muslims. But they stood by the broadcast, which they called a significant journalistic accomplishment.

They seemed to have no understanding of the Muslim world.

As former Pentagon analyst Harold Rhode has written, non-Muslims who violate the prohibition against entering Mecca are seen as contaminating the holy city. A Saudi taxi driver who allegedly helped Tamary enter Mecca has been arrested. His fate scarcely bears thinking about.

Moreover, it now looks to Muslims as though Saudi Crown Prince Mohammed bin Salman had failed to uphold the royal family’s claim to protect Islam’s two most holy places, Mecca and Medina. This has shamed both him and Saudi Arabia.

In a culture governed by the twin concepts of honor and shame, this offense is grievous indeed. And since Arab society doesn’t recognize the concept of an independent media free of state control, Tamary’s contempt for Islamic precepts will also have been viewed as Israel’s contempt for Islam and Saudi Arabia.

This is potentially disastrous. There are hopes that Saudi Arabia will join the Abraham Accords, the transformational alliance between Israel and the other Gulf states signed in 2020.

Although this rapprochement wouldn’t have taken place without tacit Saudi approval, and although there has long been backchannel co-operation between Israel and the desert kingdom, open normalization of relations between Saudi Arabia and Israel would be a revolutionary step towards peace in the Middle East.

Tamary, who also holds US citizenship, was one of just three Israeli journalists allowed into Saudi Arabia to cover the GCC+3 summit last weekend. This permission was itself a sign of the transformed relations with Israel. Now, as a result of Channel 13’s indefensible action, that crucial and sensitive relationship has been set back.

The stunt reveals a shallowness by these broadcasters not just towards Israel’s interests in normalizing with Saudi Arabia but also towards any sense of the sacred.

While some secular people display appropriate respect towards religious faith, many in both Israel and the West do not. They are not just disrespectful but actively hostile.

The Muslim world tells itself the reverse. Modernity, it believes, represents an evil contagion that threatens Islam. It has never found a way of reconciling Islam with individual autonomy and political freedom. And it views the Jews as being the source of modernity.

For their part, secular Westerners have, in fact, got this very wrong. The specific religion at the core of their culture is the wellspring of modernity. The values prized by the West, such as respect for every individual, political liberty, limited government and the belief in reason that produced scientific progress, all originated in the Hebrew Bible and became the West’s bedrock values through the vehicle of Christianity.

The onslaught by Western “progressives” upon those values and their religious source is what has given rise to the current insanity of identity politics and other anti-Western and anti-Jewish ideologies. Yet far from this exile of biblical religious precepts making people happy, it has left many desperately searching for a meaning to their lives.

Yet increasing numbers of secular Israelis are embracing a modified version of Jewish religious traditions, such as welcoming the Sabbath through Kabbalat Shabbat services, staying up all night for tikkun leil study sessions on Shavuot, and even learning Talmud.

Meanwhile, the Islamic world is taking tentative steps towards making its peace with modernity.

Last May, in the London-based Saudi daily Al-Sharq Al-Awsat, senior journalist Hossein Shobokshi attacked Islamic clerics who disparage science and challenge the validity of its findings in fields such as medicine or astronomy. As reported by MEMRI, he said science does not contradict religion but can actually help achieve its aims.

He wrote: “[Only] when a significant number of clerics accept that the sciences, in the broad sense of the term, are a means of providing definite proof regarding many issues relevant to the religion itself, and [start] showing respect for human intellect, will there be an extraordinary shift in the relationship between religion and science, and people will understand that they complement, rather than contradict, each other. …

“The arrogance displayed by many clerics towards science is nothing more than disrespect. This [attitude] will gradually cause them to lose touch with reality and turn their opinions into a combination of fairytale and myth.”

No less remarkably, Saudi Twitter users have recently been pushing the importance of Mecca and Medina as the holy places of Islam and dismissing the importance for Muslims of Jerusalem and the Temple Mount — directly contradicting incendiary Palestinian claims that Israel is defiling Islam’s holiest shrine, the Al-Aqsa mosque.

The well-known Saudi cartoonist Fahd al-Jabiri tweeted that “the direction of the prayers of the Jews is not important to us; what is important to us is only our homeland.”

No one should be starry-eyed about all this. Saudi Arabia still has a huge way to go, and anti-Jewish bigotry is still embedded in its culture. Last year, for example, as also reported by MEMRI, a Saudi YouTube channel uploaded a children’s video depicting a Koranic story of Jews being transformed by Allah into apes for violating Shabbat.

Yet the Saudi Crown Prince and other Gulf State rulers have recognized that Muslim culture must adapt to modernity or perish. That’s why the warming relationship with Israel represents more than just a transactional alliance of common interests against Iran.

It is developing into a relationship based on a mutual respect that Tamary and Channel 13 so egregiously failed to display.