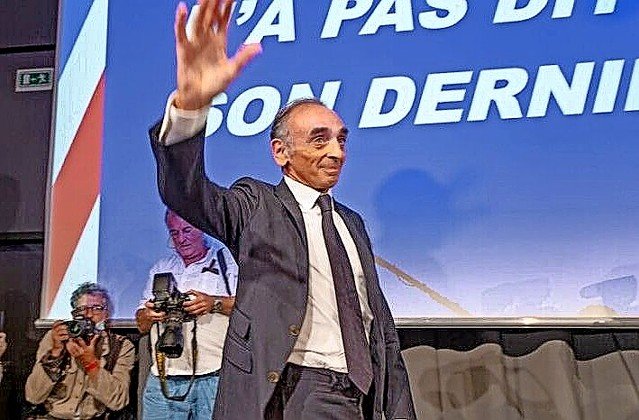 When it comes to anti-Semitic barbs and dog whistles, the overlaps between the two men who denounced their Jewish identity are apparent.”
By Ben Cohen

Could a politician who positively identifies as Jewish and expresses pro-Israel sympathies ever be elected as head of state in a European country?

The question is still a hypothetical one. In spite of the large number of proudly Jewish politicians elected to legislatures in Europe in the post-World War II period, along with those who have served as cabinet ministers and prominent judges, none of them seriously entertained the possibility of winning the post of president or prime minister in an election.

But that’s not been the case with Jewish politicians whose families left Judaism for another religion — like Laurent Fabius, a French prime minister in the 1980s who was raised as a Catholic — or, far more disturbingly, those Jews who denounced Jewish identity and the State of Israel as they ascended the ladder of power.

An obvious example of the latter was the late, longest-serving Chancellor of Austria, Bruno Kreisky, who was in office between 1970 and 1983. A scourge of Jewish organizations and the Israeli government at the time for his anti-Semitic utterances and his ostentatious friendship with PLO leader Yasser Arafat, Kreisky, who died in 1990, isn’t spoken of much these days. Nonetheless, he remains the model of a European politician who comes from a Jewish family and yet scorns his community, its history and its aspirations to ingratiate himself with the voters at large.

Kreisky’s legacy is relevant once again because of developments in France, where a TV pundit named Eric Zemmour, who also comes from a Jewish family, is being widely tipped as the far-right’s candidate in the French presidential election in April 2022. True, Kreisky was a proud Socialist, whereas Zemmour, a household name in France for his strident anti-immigrant stance, is an outspoken representative of the ultra-nationalist right; in other important respects, however, the political similarities between the two are uncanny.

Take the attitudes of both to the Holocaust, a defining event in Europe’s history that remains the subject of emotive, politically charged disputes even today. Kreisky himself lived through this period, spending most of the war in Sweden, where he escaped following the incorporation of Austria into the Nazi Third Reich in 1938. Yet for reasons that have puzzled psychologists and historians alike, the Holocaust appeared to make Kreisky even more hostile to his fellow Jews.

In 1970, he formed a coalition government with the right-wing Freedom Party, whose leader, Friedrich Peter, had served as a senior officer in an SS unit responsible for the mass shootings of Jews, Roma and others under Nazi occupation. An additional four cabinet members also had Nazi backgrounds.

When the Nazi provenance of Kreisky’s government was exposed by Simon Wiesenthal, the famed investigator who actively pursued Nazi war criminals, Kreisky responded viciously. He falsely accused Wiesenthal, a Holocaust survivor, of having been a Gestapo agent and charged him with stirring up anti-Semitism in Austria. At one point in the row, Kreisky clarified that he was “no longer a Jew” — a clue, perhaps, as to why the constant talk of his Nazi colleagues left him so enraged.

If Kreisky was willing to burnish the reputations of still-living Nazis, Eric Zemmour has done the same with dead ones — specifically, the collaborators of the Vichy regime who ruled France following the Nazi invasion in 1940. In his several bestsellers published in France, Zemmour has depicted the Vichy authorities as doing their utmost to save French-born Jews while sacrificing the foreign-born to the Germans. This assertion fits neatly with Zemmour’s nationalist revisionism, but it’s patently false, as the bald facts show.

For example, of the 4,000 children among the more than 13,000 Jews deported to Auschwitz during the notorious Vel d’Hiv roundup of July 1942, 80 percent were born in France. Moreover, the anti-Jewish laws and regulations introduced by the Vichy regime from late 1940 onwards applied to all Jews, not just the foreign-born, who at their peak composed no more than 13 percent of France’s pre-war Jewish population of 340,000.

Not content with distorting the Holocaust in France, Zemmour has also assailed the reputation of Capt. Alfred Dreyfus, the French army officer falsely convicted of espionage in 1894, amid a wave of anti-Semitism that convinced Theodor Herzl, among others, of the need for a sovereign Jewish state. According to Zemmour, we will never know whether Dreyfus was a spy, but the army at the time had good reason to suspect him because of his alleged German connections.

When it comes to anti-Semitic barbs and dog whistles, the overlaps between Kreisky and Zemmour are again all too apparent.

“If the Jews are a people, then they are an ugly people,” Kreisky once remarked, while frequently denouncing Israel as a “semi-fascist,” “clerical,” and, of course, “apartheid” state.

Zemmour, a veteran TV commentator and newspaper columnist, is not quite so blatant, but he draws from the same well. Last week, he denounced the prominent French Jewish intellectual Bernard-Henri Lévy as a “traitor” and a “cosmopolitan” — language that, as the former French Prime Minister Manuel Valls pointed out, echoed the rhetoric of French anti-Semites before the war. And in September, Zemmour opined that the victims of the gun massacre carried out by an Islamist at a Jewish school in Toulouse in 2012 — Rabbi Jonathan Sandler; his two young sons, 6-year-old Arieh and 3-year-old Gabriel; and a little girl, 8-year-old Miriam Monsonégo — had been buried in Israel because they were not truly French.

“They were foreigners above all and wanted to stay that way even beyond death,” he said.

Zemmour has not yet announced his intention to run, but the talk of his candidacy has been bolstered by a recent poll showed him coming second in the election. Marine Le Pen, the other far-right candidate who was roundly defeated by Emmanuel Macron in the second round of the 2017 election, is eyeing Zemmour nervously. Certainly, Zemmour’s message extolling traditional French and Christian values increasingly resonate in a country sharply divided on immigration, on the government’s response to the COVID-19 pandemic, on Europe and much else besides.

From a Jewish perspective, though, the question persists as to why European Jews who shun their own communities can entertain hope of the highest political offices — with Kreisky setting the precedent — while those who embrace them have to calibrate their expectations accordingly. Should Eric Zemmour decide that he wants to be the president of France, he will doubtless provide us with some answers along the way, as unpalatable as those are likely be.

In Germany, Jew-hatred both real and perceived

Accosted by a hater: What would you do?