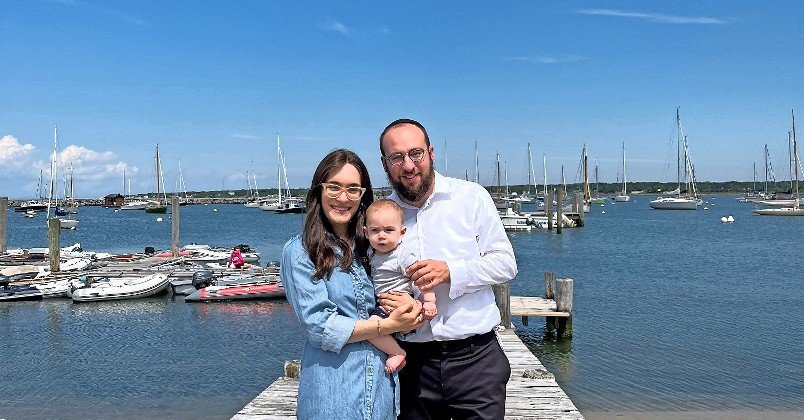 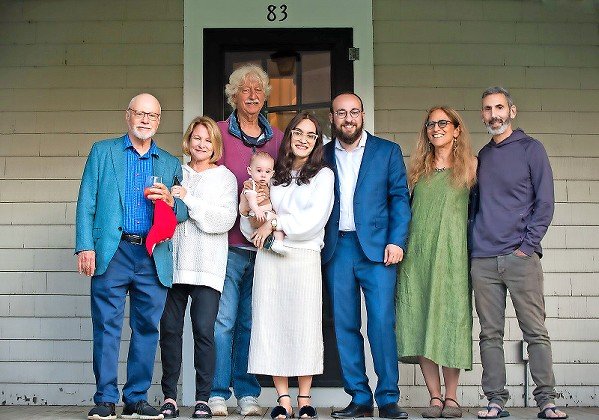 Martha’s Vineyard is beautiful. There are majestic cliffs, white beaches with fishing boats bobbing in the blue sea and painted wooden homes with neat picket fences. Though just seven miles off the coast of Massachusetts, it is also remote, accessible only by ferry or air.

Among its newest residents are Rabbi Tzvi and Hadassah Alperowitz, and their 8-month-old son Mendel, who arrived on the island in June to establish Chabad-Lubavitch of Martha’s Vineyard in a sprawling house in Vineyard Haven originally built in 1890.

Vineyard Haven, also known as Tisbury, is the island’s main port and “has one of the highest year-round populations,” says Jim Feiner, a local real estate agent and Jewish community member who helped Chabad find its clapboard dream home. The Chabad House on Causeway Road a 10-minute walk from the Steamship Authority ferry terminal in Vineyard Haven, one of a handful of points of entry to the difficult-to-reach island.

While Martha’s Vineyard is widely known as an exclusive summer destination (when its population jumps to 200,000), it’s also home to a small but growing year-round population of about 17,000. Like the lighthouses that dot the island’s rugged coasts, Chabad will be there for the long, bustling summer days and the equally long winter nights.

“One of our most important goals is to create a space for connection, a place that every single Jew can call home,” says Rabbi Alperowitz. “Whether that is for Torah study and prayer, to celebrate Shabbat and the holidays, or as a gathering place to enjoy a social community life, Chabad will create connection — to our Jewish heritage and to our Jewish family.”

The individuals who make up the Jewish community “come in all stripes and flavors,” notes Jim Shane, a member of Hillel International’s board of governors who’s been visiting the island for 42 years and became one of Chabad of Martha’s Vineyard’s earliest supporters. “We all have different needs, and Rabbi Alperowitz has found that there are Jews on the island looking for a connection that Chabad can satisfy.”

Shane, who became a year-round Martha’s Vineyard resident during the COVID-19 pandemic, was one of a number of local supporters who helped oversee the restoration and renovation process of the new Chabad center. “My life’s work has been traveling the world for Hillel and Moishe House, and connecting members of the Jewish family together,” he says. “The faces are the same, the names are different, but we are all family.” That’s why reaching each and every person and providing them with a warm Jewish home is so important to him, around the world as much as on the Vineyard itself.

“Chabad is value added to the Jewish life of the entire community,” he says.

Longtime Martha’s Vineyard resident Harriet Schleifer sees it similarly. “As Jews, our peoplehood and our pride are most important,” says Schleifer, outgoing national president of the American Jewish Committee and chair-elect of the Conference of Presidents of Major American Jewish Organizations. “Chabad continues to help so many Jews discover their own Jewish identity in a space of non-judgment and acceptance.”

The first known Jewish settler on Martha’s Vineyard was an immigrant from Lithuania named Sam Cronig, who arrived there in 1905 at age 17 via New York’s Lower East Side. According to the Jewish Virtual Library, by 1917, Sam had saved enough money to bring his brothers, a sister and his future wife, Libby, from Minsk to Martha’s Vineyard. The same year, he opened Cronig’s grocery store, which today is the main supermarket on Martha’s Vineyard. Other early Jewish families included the Brickmans and the Isaaksons.

Though not all of them were strictly observant, they did their best to uphold Jewish tradition, holding a minyan when they could in Cronig’s living room, bringing kosher meat in from Boston and New Bedford, and lighting Shabbat candles. This and similar activities eventually led to the establishment of the Martha’s Vineyard Hebrew Center.

The main draw of the Vineyard lifestyle, says Feiner, who is also chairman of the housing commission in the town of Chilmark, is the “beautiful, safe environment, a high level of cultural sophistication, growing diversity and the healthy, outdoor lifestyle.”

Some of the island’s appeal lies in its almost idyllic seclusion, but the reality is that often-stormy seas and limited transportation mean that many conveniences people take for granted on the nearby mainland can be difficult to get a hold of on the island.

When a number of years ago, Shane found himself without a lulav and etrog, and the Sukkot holiday fast approaching, he was connected with Rabbi Yekusiel Alperowitz, who directs Chabad of Cape Cod together with his wife, Devorah, in Hyannis. The Alperowitzes have been serving the Jewish community on Cape Cod and the Massachusetts islands since 1995, and the rabbi was able to send Shane a lulav and etrog set by boat in time for the holiday.

The elder Rabbi Alperowitz is Rabbi Tzvi Alperowitz’s uncle. He’d long fielded requests for a permanent Chabad presence on Martha’s Vineyard and as the island’s popularity boomed, so did its number of Jewish residents. This sea change also made it a lot more expensive and more difficult to get a new project of this kind off the ground.

Feiner says it wasn’t always like this. Growing up on the vineyard, where his parents ran the Beach Plum Inn from the 1960s until the late ’80s, he recalls the island as being more of “a seasonal destination, active for six to seven weeks during the summer.” Back then, it was more of a middle-class family, college-student-type getaway, with lots of undeveloped areas for camping and the like. “Housing wasn’t a problem like it is today when you can’t find a home under a million dollars.”

Over the decades, more people kept discovering Martha’s Vineyard, including but not limited to global leaders in business, politics and the arts, drawn precisely by the unassuming and enchanting nature of the place. Covid and the new dawn of remote working made living permanently on Martha’s Vineyard an option for many more people; some estimate a jump of about 5,000 full-time residents, making the need for a Chabad center all the more clear. That’s when Cape Cod’s Rabbi Alperowitz thought of his nephew, Tzvi, who grew up in Bournemouth, England, where his parents serve as Chabad representatives, and niece Hadassah, whose parents direct Chabad of Weston, Fla.

“In May of 2021, I got a call from the rabbi in Cape Cod, and he told me his nephew was seriously interested in opening a Chabad House and we began to plan,” says Shane. He wasn’t the only one interested, and the idea gained traction.

Finding a suitable place in a real estate market like Martha’s Vineyard promised to be a challenge, but Feiner, who’d felt that he’d grown distant from Jewish life, became driven to help Chabad set down roots on the island. Shortly after the meeting, Feiner chanced upon a property that seemed like an ideal location for a future Chabad center. “It was a multi-use structure in a great location, and the ball started to roll.”

“With the kindness of some members of the community,” says Shane, an effort led by philanthropist Terry Kassel, “the rest is history.”

Though the Alperowitzes made multiple trips back and forth to become better acquainted with the community, the location makes frequent travel a challenge, and during the months leading up to their move, the Alperowitzes made great strides in engaging the community from afar. They led pre-Shabbat gatherings online and started a series called “Vineyard Journeys,” which featured round-table discussions with members of the local Jewish community, such as the author Nancy Slonim Aronie, who directs the Chilmark Writing Workshop, and like Chabad Rabbi Moshe Moskovitz, the chief rabbi of the embattled-Ukrainian city of Kharkiv.

“What Tzvi has accomplished in a year is amazing,” acknowledges Sandy Nadelstein, who has lived full-time on Martha’s Vineyard with his wife, Sofya, for nearly 30 years. “It’s a miracle — total Divine intervention — that it’s turned into this.”

The next phase began on May 15, when Rabbi Alperowitz booked the family’s one-way ferry passes (tickets when taking a car are in high demand and are nearly impossible to obtain at the last moment). The family docked in Vineyard Haven on June 8.

As the summer season kicks off, Harvard Law School professor emeritus Alan Dershowitz is lending his personal Torah scroll to be used at services at Chabad.

“Chabad brings neshama back to Judaism,” says Dershowitz. “For so many, Judaism lives in the mind and intellect, but Chabad appeals to the heart and soul of every Jew.”

“Chabad welcomes everybody, no litmus test. If you are Jew and want to join, no questions asked,” added Dershowitz, who has called Martha’s Vineyard home for 55 years.

Chabad will host Shabbat dinners, Torah classes, holiday programs, prayer services and social gatherings of all sorts, but, Hadassah Alperowitz adds, some of their future plans will depend on the needs they encounter. Already, she knows there will have to be a strong focus on Jewish education for children, especially in light of Martha’s Vineyard’s isolation, and the couple has started working on programming.

The island may have changed over the years, but at its heart, it remains a rugged, seaswept fishermen’s outpost, exposed to the wilds of nature and thus a place where the Creator’s handiwork can often be more easily recognized. This can be seen in the raging storms, the blooming flowers and the spray of salty seawater breaking against a cliff.

Or in the unlikely evolution of a new Jewish center on one of the most exclusive vacation spots in the United States.

“G-d works in mysterious ways,” says Jim Shane. “He finds the time and the way, and makes things happen.”