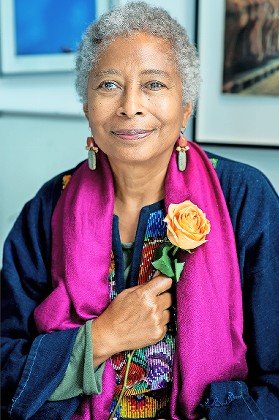 Walker believes that the world is run by a secret cabal of alien lizard people, many of whom are Jewish.”
By Peter C. Herman

When the San Diego Community College District announced that Alice Walker would be the keynote speaker for the new chancellor’s installation, immediate protests followed. Various Jewish organizations criticized the invitation and the San Diego Union-Tribune reported on the controversy. At least two opinion pieces (here and here) came out against Walker’s appearance.

Walker (pictured), best known for her 1982 novel, “The Color Purple,” made into a movie in 1985 and a musical in 2005 (which garnered 11 Tony Awards), has become an icon of American culture. Why this is the case is something of a mystery, since none of her subsequent novels achieved anything like the success of The Color Purple. Unlike, say, Toni Morrison, Walker cannot point to a substantial body of work to justify her reputation. Nonetheless, she remains a popular figure on the lecture circuit and a selection of her journals has just been published to considerable acclaim.

But Walker is also an anti-Semitic conspiracy theorist. She follows the deranged ideas of David Icke, who believes, as Vox puts it, “that the world is run by a secret cabal of alien lizard people, many of whom are Jewish.” Walker herself authored a “poem” that is riddled with anti-Semitic libels. In the screed, Walker encourages her reader to “study the Talmud,” but not by actual Talmud study. Instead, she says:

I recommend starting with YouTube. Simply follow the trail of “The Talmud” as its poison belatedly winds its way Into our collective consciousness.

What does one find on YouTube? A litany of anti-Semitic tropes taken straight from “The Protocols of the Elders of Zion”:

For his “crime” of throwing the bankers

Out of the Temple? For loving, standing with,

The poor? Was his mother, Mary,

Are Goyim (us) meant to be slaves of Jews, and not only

That, but to enjoy it?

Are three-year-old (and a day) girls eligible for marriage and intercourse?

Must even the best of the Goyim (us, again) be killed?

Pause a moment and think what this could mean

Or already has meant

In our own lifetime.

Now, one would think that at a time when the slightest hint of racism is enough to sink a career, Walker’s unapologetic adherence to anti-Semitism would disqualify her from the role of keynote speaker on a college campus. But the response to the wave of protest to her invitation shows that David Baddiel was right when he titled his book “Jews Don’t Count.”

Progressives, says Baddiel, believe that anti-Semitism “is not real racism, or that it is a lesser form.” So when anti-Semitism occurs, it’s either ignored or discounted as something minor. That is a perfect description of the response to Walker’s anti-Semitism.

The San Diego Community College District is pleased to welcome Alice Walker as keynote speaker at the May 31 investiture celebration. Walker is a Pulitzer Prize-winning author and her participation is consistent with the District’s support of the free exchange of ideas and opinions. This does not mean the District agrees with every statement made by her now or in the past. Walker is a source of inspiration for many in the community. This includes chancellor Carlos Cortez, who says Walker played a key role in his decision to focus his academic studies on African-American feminist political history.

It is inconceivable that someone who spouted Walker-style slurs about blacks, Hispanics, Asians, LGBTQ persons or any other “minoritized” group would be treated with such respect. It is inconceivable that the repetition of some of the worst racist anti-black or anti-Hispanic tropes would be treated as part of the “free exchange of ideas and opinions” or described as the subject of legitimate disagreement.

This is to treat anti-Semitism as if it were a dispute over the causes of inflation or whether students and teachers should continue to wear masks in the classroom.

Imagine the response if someone floated the idea of an invitation to Don Black, the white supremacist who created Stormfront.org, because he pioneered the use of the web to spread ideas? After all, we don’t have to agree with “every statement made by [him] now or in the past.”

What about an invitation to David Duke, the former grand wizard of the Ku Klux Klan, because he was also a successful politician and, whether we like it or not, “a source of inspiration for many in the community”?

I am glad that Walker has had a positive influence on Cortez and that she has been an inspiration for him. But Jewish faculty at several San Diego community colleges see Walker as a serious threat.The refusal to take their concerns seriously is alarming in the extreme.

As one writes in a private email, Walker’s invitation “clearly exemplifies the ‘Jews don’t count’ mentality. … This district has sent a clear message that Jews better watch their backs because anti-Semitism is clearly tolerated, and in this case invited, to campus.”

At a time when the ADL reports that anti-Semitic incidents in the United States are at an all-time high when attacks on synagogues and JCCs have increased 61 percent, when a white supremacist posted a virulent anti-black and anti-Semitic manifesto before he went on a murder spree in Buffalo, it is sickening that Alice Walker will be accorded the honor of a keynote address.

Jew-hatred needs to named, confronted and condemned, not brushed aside as unimportant or something upon which reasonable people may disagree.