For the Jews, history repeats itself in Ukraine 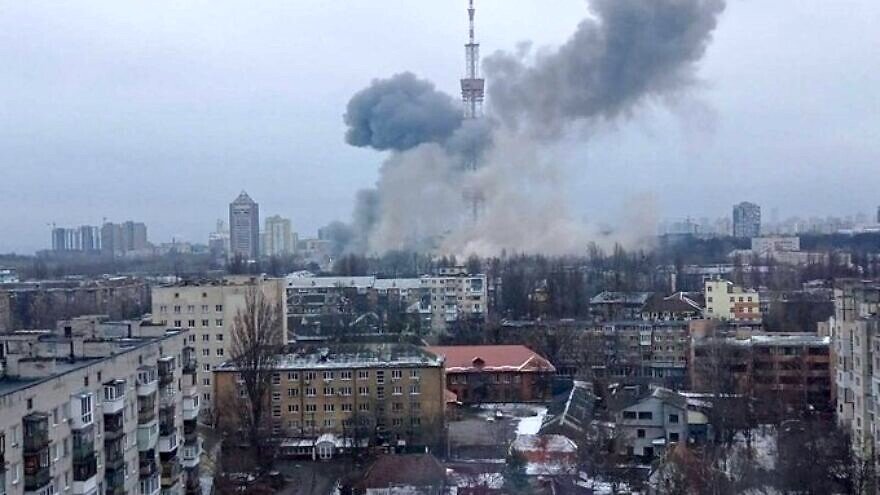 A Russian military strike on a TV tower in Kiev, Ukraine, on March 1.
Twitter

There are Nazis in Ukraine, as Putin claims. They work for Putin.”
By Melanie Phillips

The onslaught against Ukraine by Russia’s President Vladimir Putin is a horrific tragedy for all Ukrainians as well as a crisis for Europe and the west in general. Nevertheless, for the Jewish people, it has special and deeply troubling resonance.

During the Holocaust, an estimated 1.2 million to 1.4 million Ukrainian Jews were slaughtered. Volodymyr Zelensky, the country’s heroic president who is inspiring its resistance, is a Jew who lost relatives in that cauldron.

Now Ukraine’s Jewish community, which carries a long history of trauma from waves of pogroms over the centuries, is again in terror. Jews are taking refuge in synagogues and bunkers while some have fled to Israel.

Once again, antisemitism is stalking their land. Rabbi Jonathan Markovitch and his wife Inna had been sheltering dozens of people in the basement of their Chabad-affiliated Kyiv Jewish Centre which they had stocked with food, water and fuel.

But they left Ukraine within 24 hours of warnings from security officials that their lives were in danger. “They said it was safer for the community, for me and for them,” said the rabbi.

Preposterously, Putin has used the pretext of “de-Nazification” for his aggression. Accusing the Ukrainians of being Nazis and drug addicts, he claimed his invasion was “to protect people who for eight years now have been facing humiliation and genocide perpetrated by the Kyiv regime.”

This is clearly ludicrous. Not only is Zelensky a Jew but so was Ukraine’s former prime minister, Volodymyr Groysman. In the 2019 general election, Zelensky gained the support of around 70% of voters.

The only crime committed by democratic Ukraine is to be independent of Putin’s Russia.

Putin is using a narrative which twists and distorts Ukraine’s history. It’s true that many Ukrainian nationalists initially welcomed the German invaders as liberators during World War Two and collaborated with the occupation. Ukrainian antisemites were considered particularly savage.

But Ukraine suffered more than Russia from Nazism, with more of its population being killed during the war than any other country.

This was publicly rejected by Ukrainian Jewish religious and civic leaders. In March 2014, Rabbi Yaakov Dov Bleich (one of two who claim to be the country’s chief rabbi) said that antisemitic incidents in Ukraine were rare, and that the first act of anti-Jewish vandalism in Crimea had occurred two days after Russian troops seized control.

Putin’s latest “de-Nazification” claims have provoked horror among Holocaust experts. Hundreds of historians signed a letter condemning the Russian government’s “cynical abuse of the term genocide, the memory of World War II and the Holocaust, and the equation of the Ukrainian state with the Nazi regime to justify its unprovoked aggression.”

It is in fact Putin himself who has unleashed neo-Nazism on Ukraine using the Wagner Group. This is a private army of mercenaries financed by pro-Kremlin oligarchs. It’s led by Dmitry Utkin, a former Russian military intelligence officer sporting Waffen-SS tattoos who allegedly named his outfit after Hitler’s favorite composer.

Far-right extremists comprise the core of this group, which has committed horrific atrocities across Africa, the Middle East and Ukraine as a front for Russian imperial policy. And it has now reportedly been instructed by Putin to murder Zelensky.

Moreover, as Oved Lobel writes for the Australia/Israel Jewish Affairs Council, the Wagner Group is far from Putin’s only far-right asset.

Almost every major nationalist and racist violent extremist group in the world today, says Lobel, got its start from the neo-Nazi Iron March forum, started by Alisher Mukhitdinov in Russia in 2011.

Mukhitdinov suddenly disappeared in 2017 but was identified by the BBC Russian Service in 2020 and found to be living undisturbed in a Moscow apartment — more than implying a relationship with the Russian security services.

The Russian Imperial Movement, which has fought in Ukraine, was designated a terrorist organization by the US in 2020 for training and funding neo-Nazi terrorists across the world in its military camps, which operate under the Russian security services’ eye.

Some terrorists trained by this group have been linked to attacks in Europe, such as the Nordic Resistance Movement’s bombing in Sweden in 2017. Russian intelligence has also been linked to Hungary’s neo-Nazis.

Putin is seeking to reverse the identity of neo-Nazis and their victims by channeling the myth of the Soviet fight against German Nazism. But this too is built on a distortion of history.

Subsequently, Russia did mount a heroic defense against Germany which helped win the war. Putin is manipulating this fact to present a staggering inversion of reality to justify his unprovoked aggression and brutality.

Now where have we heard this before, where the victims of an attempt to erase them from the map are themselves accused falsely of genocide?

Well of course, this is precisely what the “Palestinians” have done to Israel. For decades, they have promoted the big lie that they are the indigenous people of the land, that the Jews were the colonizers who deprived them of their rights and that the Israelis continue to oppress and practice “genocide” against them.

Every part of that is not only untrue but it is the “Palestinians” who seek aggressive conquest and the Israelis who are victims of their terror.

This big lie about Israel was created in the 1960s when the “Palestinian” terrorist leader Yasser Arafat made common cause with the Soviet Union to rewrite history, demonize the Jewish state and subvert the west by twisting its collective mind and destroying its moral compass.

This was laid out by General Ion Pacepa, the former head of Romania’s foreign intelligence service, who played a significant role in Soviet bloc operations directed against Israel and the US and who defected to the west in 1978.

According to Pacepa, the chairman of the KGB, Yuri Andropov, told him, “We needed to instill a Nazi-style hatred for the Jews throughout the Islamic world, and to turn this weapon of the emotions into a terrorist bloodbath against Israel and its main supporter, the United States.”

This mind-bending has resulted in Israel’s demonization in the West. And now the same strategy is being deployed by Putin towards Ukraine.

In a Hebrew-language post on his Facebook page, Zelensky urged Jewish people around the world to speak up against Russia’s attempt to “erase” Ukrainians, their country and their history.

“I am now addressing all the Jews of the world,” he wrote. “Don’t you see what is happening? That is why it is very important that millions of Jews around the world not remain silent right now.”

Zelensky cried out to the Jews to speak up because he sees history repeating itself in his country. For the Jewish people, wherever they are, history always does.