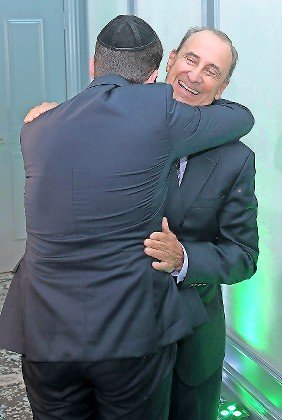 Bone marrow donor and recipient embrace for the first time, at the Ezer Mizion fundraiser. The two men will forever be intertwined.

Supporters of Ezer Mizion teed off at the Seawane Country Club on Sunday, elevated by the knowledge that each stroke was a strike against cancer.

For many cancer patients, a bone marrow transplant is their only chance to survive. Genetic matching between donor and patient is essential for success and, since genetics is based on ethnicity, Jewish donors are needed for Jewish patients. Ezer Mizion is the largest Jewish registry in the world and has saved 3,980 lives, 390 in 2020 alone.

Manny Malekan and Simmie Chiger, committee chairs, were thrilled to have the event completely sold out.

Chiger shared with the guests how, after recently being in a horrific accident, he thanked Hashem with these words: “Perhaps the merit of my helping to save the lives of others enabled my own life to be saved.”

Attendees met Russell, a young grandfather of three, who thanked Ezer Mizion for enabling him to enjoy watching his grandchildren grow up.

In a moving speech, Russell described how he felt when he received his diagnosis, which occurred unexpectedly as a result of a routine exam. The doctor had said he was in good health, like a man 15 years his junior, except for a quirky blood test which was probably a mistake.

Well, it wasn’t a mistake. Russell soon found himself confronting a monster named Cancer who had entered uninvited into his idyllic life.

For Russell, there was light at the end of his tunnel. Motti, one of the over one-million Ezer Mizion registrants, was a perfect genetic match.

As Russell was about to leave the stage, he was asked if he would like to meet his donor for the first time. Motti was then brought to the stage where the two embraced as only two brothers can. It was Motti’s blood that now flowed through Russell’s arteries. The two men will forever be intertwined.

Each attendee left the club knowing that there were many, many “Russell’s” out there — some of them even small children — and that through Ezer Mizion each potential donor could help to save a Jewish life.