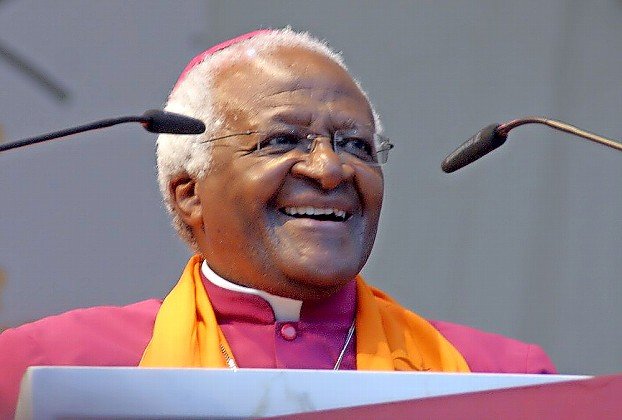 The war, seeking a total delegitimization of Israel, is the real anti-Semitism of our time.”
By Yishai Fleisher

Back in 2003, I was a student at Yeshiva University’s Cardozo Law School. I had married my classmate, Malkah, and we were both halfway through the last year of school.

One day, we heard that the famed Rev. Desmond Tutu was going to be honored on our campus by a student publication, the Cardozo Journal of Conflict Resolution, and the International Law Students Association — and awarded the prestigious International Advocate for Peace Award.

Not knowing much about Tutu, other than his work to end apartheid in South Africa, we regarded this news positively. However, it did not take long for my mother-in-law, herself a graduate of Cardozo, to send us disturbing information that showed that while Tutu was a hero in South Africa, he also held deep anti-Semitic and anti-Israel convictions.

So we began an information campaign, hanging signs on the walls of the law school with his quotes about the monopoly of the Jews on the Holocaust and the Jewish lobby’s grip on America. This caused friction with parts of the student body, and even with teachers at the law school.

The impending event started garnering attention, and some people began questioning the wisdom of inviting Tutu to Cardozo. Even then-Anti-Defamation League head Abe Foxman chimed in, calling it “a poor and inappropriate choice for a Jewish institution. [Tutu] is not a friend of Israel or the Jewish people; he has flirted with anti-Semitism and his condemnations have been angry and nasty.”

The tension rose, and finally our student group secured a meeting with the dean of the law school, David Rudenstine. At the meeting, we demanded the cancellation of the event. The dean denied our demand on the grounds that there was no way to back out now, and besides, many people were thrilled that Cardozo was hosting Tutu.

We then asserted our right to protest at the event. But the dean told us that we would only be allowed to rally outside the building where the presentation was to take place, and that the lobby would have to be kept clear. Now, feeling like I was standing before the Supreme Court, I gave my best plea: Yeshiva University was built, I said, because Jews were once barred from being accepted into non-Jewish academic institutions. Jewish money built this school precisely so that we, young Jews, would stand a better chance in an anti-Semitic world.

Now an open anti-Semite was coming to the school built to protect me, and I should be forced outside? Dean Rudenstine appreciated a good argument and relented. We would be allowed to protest inside the school.

And so it was that when Tutu came into the building, self-assured and full of pride, he heard not the murmur of adoration as he expected, but loud cries of “racist!” and “anti-Semite on campus!” His face became filled with rage, and I saw with my own eyes his hatred for Jews and Israel.

Fast forward to the last week of 2021. Alan Dershowitz, the indefatigable defender of Israel, laid into the just-deceased reverend in writing and on TV. He explained that while Tutu should be lauded for his great achievements against South African apartheid, he should also be seen for what he is: a classic religious bigot and anti-Semite.

Dershowitz cited many examples of Tutu’s statements against Jews,- many of which we had tacked up on the walls of Cardozo in 2003: how Jews have an outsized influence in American politics; how Jesus hates the Jews; and how Zionism is racism.

Yet, for all the pluck of calling out Tutu’s racism, both Dershowitz in 2021 and we in 2003 failed to comprehend what Tutu had actually managed to achieve. Tutu’s real anti-Semitic accomplishment was not the mere perpetuation of classic bigoted tropes, but rather the utter reversal of the Israel narrative in the minds of millions.

For centuries, a riveting historical account gripped much of the Protestant world: the story of the Jewish people — a chosen nation, the liberation heroes of the Bible, the people who stood up against Pharaoh and Egyptian slavery, walked through the split Red Sea, received the Torah at Sinai and finally made it into the Promised Land. Later, after a temple stood in Jerusalem, these same Jews disappointed G-d, were defeated and dispersed, and yet prayed through the millennia for a return to that good land — a herald of global salvation.

For many civil-rights leaders throughout history, from the pilgrims and the leaders of the American Revolutionary War to the abolitionist movement and Martin Luther King Jr., the Jewish people have been an inspiration for the very idea of liberation. When the improbable State of Israel was born, it became again a beacon of liberty by taking on the giant armies of the Arabs, and facing the Soviet empire — all in the just cause of rebuilding a commonwealth on ancient, hallowed and blood-soaked ground.

But Tutu was one of the pioneers of a radically different narrative.

With his credentials in fighting apartheid, Tutu worked to reframe Israel in the same category as South Africa: as white oppressors, interlopers, colonialists, a foreign entity in the Middle East. For Tutu, all of Zionism was an occupation and the Jews were abusers, suppressing the Palestinians in nothing less than the evil apartheid system — an accusation that his credentials made credible.

In the same vein, Tutu helped flip the image of the Palestinians from jihadi terrorists to indigenous freedom fighters. Indeed, if Jews used to face a “replacement theology,” now we confronted a replacement narrative.

This Israel-villain framework was incorporated en masse by the many entities looking for an excuse to verbalize their anti-Semitism from Western European and American universities to Soviet Russia and the Arab entities that they backed.

Therefore Tutu’s legacy is much more than that of a mere bigot. He was one of the main architects of a movement to reframe Israel as the antagonist in the global battle against oppression. Terms like “Israeli apartheid,” “Israeli occupation” and “Israeli genocide” are the new-speak accusations that Jewish students on campus face and which are trumpeted daily at the United Nations.

Turning around the Tutu-inspired perception of Israel should be one of the Jewish state’s most pressing goals. Yet so many hasbara groups try to paper over the accusations by showing how nice, successful, inclusive or willing to compromise Israel is.

They don’t understand that the attack on Israel is not about specific points of behavior that can be addressed or lies that can be disproven, but rather about the very legitimacy of a Jewish nation-state. The Tutu accusation of colonialization and apartheid comes from a place of hating Israel.

The UN’s denial of Jewish history in Jerusalem and Hebron, its endless resolutions accusing Israel of racism and genocide, come from the same hateful yearning to see the end of Israel. It’s a war of total delegitimization, and it is the real anti-Semitism of our time.

Understanding the battlefront and facing it directly by unapologetically asserting Israel’s rights to a Jewish national state in the ancestral homeland would be a much-needed public diplomacy turnaround in the narrative war.