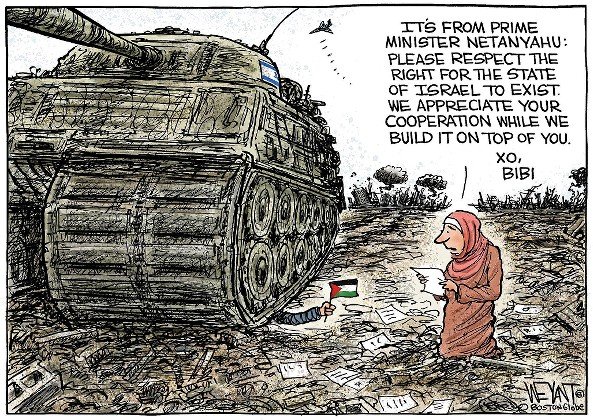 “Love letter from Netanyahu” by Christopher Weyant in the Boston Globe.
Commentary by Rabbi Abraham Cooper

It’s no secret that Hamas, spawned by the Muslim Brotherhood, wants to eliminate the Jewish State of Israel.

In word: That goal is embedded in its Protocols of Zion-invoking founding charter.

In deed: Suicide bombings of civilians in Israeli cities, kidnappings via tunnels dug under Israeli territory, and in the last 10 years, thousands upon thousands of rockets, missiles, mortars even kerosene-laden children’s balloons and kites.

Hamas is a terrorist organization, designated so by the United States and many other countries. It controls the Gaza Strip and a hefty chunk of the Palestinian population. It is so dangerous that Palestinian Authority leader Mahmoud Abbas doesn’t visit his constituents there, fearing assassination.

But all these facts are sidelined when Israel flexes its muscles to protect its own.

There’s enough disinformation and outright lies about the recent Hamas conflict to fill a book. There’s the New York Times. In a matter of days, its editors published a phony map of the Holy Land, implying that Jews stole the land. Then it posted front-page pictures of the Palestinian children who perished during the conflict. America’s newspaper of record accused and convicted Israel of war crimes. They said not a word about Hamas, even though a number of Palestinian deaths and injuries were caused by rockets that were fired and landed in its own territory.

Don’t bother checking back issues of Times from 1939 to 1945. There are no photos of the 1.5 million Jewish children deliberately mass-murdered by Nazi Germany and their collaborators during the Holocaust.

These are but two examples of how the media has willingly abetted Hamas — a verified terrorist group and their Jew-hating supporters around the world — to move the Middle East goalposts.

It seems like just yesterday that dueling think tanks, pundits and op-eds were debating a future Palestinian state’s capital in eastern Jerusalem, where the final international borders would be set, ridding itself of the evil of “occupation” and the ultimate “obstacle to peace” — those damn Israeli settlements in Judea and Samaria.

The only problem this time was that none of the 4,000-plus rockets hurled at Israel by Hamas targeted those “settlements” or “occupied territories” (though the New York Times did recently refer to the Israeli city of Lod as an “internal Jewish settlement,” and Hamas claims all of Israel as “Occupied Territories”). Those terror missiles were launched against the heartland of the Jewish state, including, Beersheva, Jerusalem and Tel Aviv.

Israel responded as every sovereign state would to an onslaught of missile attacks — by taking out the enemy and its terror infrastructure.

However, there is one difference. Israel won’t use the carpet-bombing option deployed in many conflicts by many militaries. Israel won’t target schools and homes, where so many of the missiles and rocket-launchers are stored. It won’t bomb a hospital even as Hamas leaders hide below its basement.

This time, Israel did uncover and destroy more than 60 miles — 60 miles! — of interconnecting underground military tunnels built by Hamas using diverted international aid. When Israel found it necessary to go after occupied civilian buildings, it sent notices, flyers, text messages and even phone calls to alert civilians and Western journalists drinking coffee with Hamas leaders to warn them to evacuate the dual-use high-rise before the Israeli Air Force leveled it.

The anomaly unheard of in the annals of military history: Israel has no interest in harming civilians, but Hamas has every reason to run up civilian casualties in Gaza so it can present itself as a righteous David against the inhuman Jewish Goliath. Never mind that many Hamas civilians, including children, were actually killed and maimed by misfired rockets that landed on their own people. And no Googling journalists worth their salt would bother to note that Israel voluntarily evacuated Gaza 15 years ago to give peace a chance.

So, even without an Israeli land invasion, Hamas was dealt a devastating blow to its infrastructure and lost many frontline terrorists buried in those tunnels. No worries. Hamas supporters launched Israel=Apartheid Israel=White Supremacist State Gaza=Ferguson. These screeds were accompanied by violent attacks against Jews and synagogues from Berlin to London, Montreal, Toronto, New York and Los Angeles.

Against this backdrop, an artistically talented armchair anti-Semite drew a political cartoon that turned truth on its head. An Israeli tank was produced crushing Palestinian resistance. (There was no invasion of Gaza). Instead of praising Israel for sparing civilians by forewarning them, the cartoon falsely pedals the Hamas screed that (all) Israel is built on Arab land.

The elites who run the Boston Globe defend running the incendiary cartoon, which puts all blame for Gaza’s suffering on the Jewish state. If you absorb that emotive message, who can blame Palestinians for screaming from Brooklyn to Dusseldorf, “From the river to the sea, all of Palestine Will be Free,” as others beat Jews senseless for wearing a kipah in New York or dining with friends in Los Angeles.

Please look at this cartoon. And please share your thoughts with Bina Venkataraman, the editorial-page editor responsible for running it, at: bina.venkataraman@globe.com.

Let us know what she says … on Twitter @simonwiesenthal.