Bad precedent and curse of the small parties 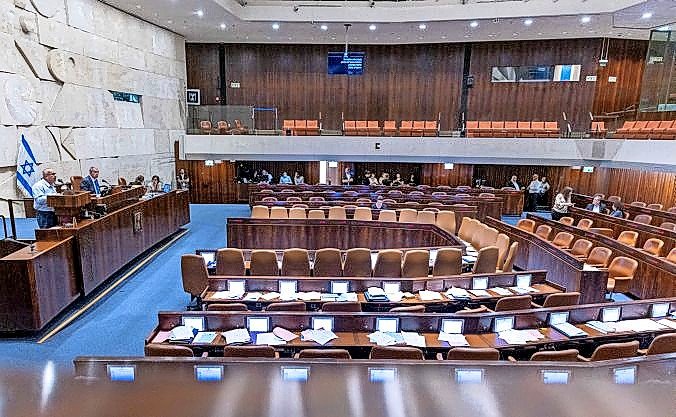 The Israeli Knesset hall, ahead of the vote to disband on June 30.
Olivier Fitoussi/Flash90

Despite this past year’s failed ‘experiment,’ the same people are at it again.”
By Ruthie Blum

Ever since the April 9, 2019 Knesset elections, foes of Likud Party chairman Benjamin “Bibi” Netanyahu — the longest-serving prime minister in Israel’s history and currently the head of the opposition — have been blaming him for the political quagmire that is sending the public back to the ballot box this fall for the fifth time in three-and-a-half years.

This chorus is made up of various voices inside the halls of parliament and beyond, with protesters and pundits of different stripes uniting around an aversion to a common enemy. The mantra-chanters in question claim that if Netanyahu would only step aside, all of Israel’s coalition crises would vanish, making way for a broad and stable government.

The past year’s “experiment” — with a government created for the sole purpose of “kicking Bibi out of Balfour” (the name of the street in Jerusalem where the official residence of the prime minister is located) — led by Naftali Bennett, whose party garnered just a few seats above the threshold, exemplified that the above assertion was completely false. Astonishingly, however, it is still being repeated ad nauseam, and by the same people.

You know, those who should be eating their hats, rather than parading around like peacocks.

Alas, the looming elections, slated for Nov. 1, have brought us back to square one. But it’s the “anyone but Bibi” crew and not Netanyahu who bear responsibility for the chaos.

Bennett’s legal manipulation of the system to crown himself premier is also at fault. It not only set a dangerous precedent; it whetted the appetite and stirred the imagination of the heads of other small anti-Netanyahu parties.

It is crucial to note in this context that the original coalition-impasse culprit was Yisrael Beiteinu Party chief Avigdor Lieberman. A member of the right—at least, at the time—he had vowed to back Likud. This is why all surveys placed him on the Bibi side of the pie chart. As a result, when the exit polls came in, Netanyahu appeared to be a clear winner.

After the final vote count, however, Lieberman suddenly reneged. Had he decided to fink out all the way, he could have supported Benny Gantz’s “anybody but Bibi” Blue and White bloc, which received a single mandate more than Likud. And a government would have been formed in a flash.

But he opted out of that, too. It was a perfect example of a small party wielding disproportionate power.

Little did Israelis realize that two years and three more elections later, an even smaller party, Yamina, would end up doing something far worse: robbing right-wing votes and handing them over to the left. Still, it satisfied Lieberman, who was anointed finance minister.

The fairytale didn’t end well, of course, since the ideological mish-mash was impossible to sustain. Even the fictional accounts of its successes promoted by anti-Netanyahu media outlets weren’t able to keep Humpty Dumpty from falling to pieces.

Nevertheless, small parties are working furiously to repeat the mistake. Gantz, who served as defense minister under Netanyahu, Bennett and now under Prime Minister Yair Lapid, is unable to give up his dream of taking the helm.

Because of his poor showing in the polls, he quickly merged with New Hope leader Gideon Sa’ar, who was unlikely to make it past the electoral threshold, to increase both their chances. In other words, here they go again.

Not only that. In a Channel 13 interview on Monday evening, Gantz went as far as to hint that he could pull a stunt similar to that of Bennett and become premier with a third of the seats that Likud will probably win. Prior to Bennett’s maneuver, such an idea wouldn’t have occurred to him.

Ironically, though touting himself as a true statesman of the “center” who can “unify” all sectors, he announced that his main goal is to “prevent Netanyahu from reaching the 61 [seats]” he needs to form a government in the 120-seat Knesset, then “to provide an alternative.”

Can’t these guys come up with any fresh material? That they constantly obfuscate the inconvenient fact that Netanyahu’s Likud has more seats than any other single party in the Knesset is understandable, especially with an election on the horizon.

This is why their focus always returns to Bibi’s criminal trial (which is crumbling with each cross-examination of prosecution witnesses) and the “dubious” character and/or outrageous statements of a couple of candidates running in the Likud primaries next month. All this does, though, is smack of elitist snobberyaimed at Likud voters. It certainly doesn’t move the needle.

If Israelis wish to end this exhausting and expensive electoral cycle, they need to make a choice between two camps: the one whose victory will bring Bibi back to Balfour; and that which will see Lapid, who heads the second-largest party, Yesh Atid, remain in the Prime Minister’s Office.

Afterwards, they can push for a change in the system. But no one must bank on that happening any time soon, thanks to opposition from the small parties.