As left dumps Israel, what’s a Jewish Dem to do? 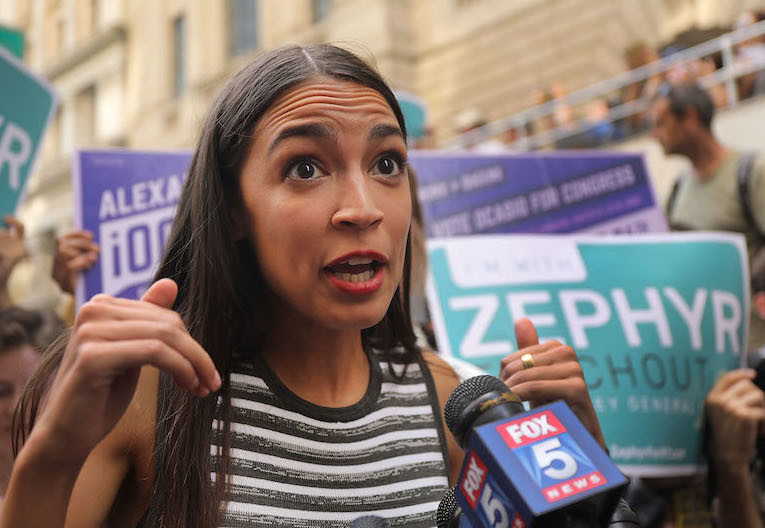 After Alexandria Ocasio-Cortez shocked the political world by defeating longtime Queens-Bronx Rep. Joseph Crowley in a Democratic primary last month, Democratic National Committee Chairman Tom Perez quickly aligned himself with the former political outsider, saying that “she represents the future of our party.”

If so, that future appears to include the kind of sharp criticism of Israel once considered taboo in both major parties.

Ocasio-Cortez ran on a platform of Medicare for all, fully funded public schools and a universal jobs guarantee. But she has also been critical of Israel, calling its military’s killing of Palestinian protesters in May a “massacre.”

The Democratic Socialists of America, of which Ocasio-Cortez is a member, supports the Boycott, Divestment and Sanctions movement against Israel. Ocasio-Cortez has remained silent on the issue.

In Minnesota, Democratic congressional candidate Ilhan Omar calls herself an “intersectional feminist” and Israel an apartheid regime. In Virginia’s 5th Congressional District, Democratic nominee Leslie Cockburn is the co-author, along with her husband, of “Dangerous Liaison: The Inside Story of the U.S.-Israeli Covert Relationship,” a scathing 1991 attack on the Jewish state.

“It seems to me that some criticism of Israel is part of a package among young progressives along with health care for all and jobs for all,” Democratic strategist Brad Bannon told Newsweek.

That puts Democrats who are both liberal and pro-Israel in a bind. Whether the result of “intersectionality,” which links Israel’s treatment of Palestinians to other left-wing causes, or a willingness to call out its right-wing government, progressive criticism of Israel may make for some hard choices come Election Day.

Although the Pew survey received notable criticism, the general trends it notes have been shown elsewhere.

Some credit Sen. Bernie Sanders, I-VT, with normalizing such criticism of Israel. While the 2016 Democratic presidential candidate defined himself as “100 percent pro-Israel,” he recently called on the U.S. to adopt a more balanced policy. In late March, Sanders’ office posted three videos to social media harshly criticizing Israel for what he deemed excessive use of force in Gaza and the Trump administration for not intervening during the border clashes.

Last year, Perez appointed as his deputy Rep. Keith Ellison of Minnesota, who in addition to being dogged by ties to the anti-Semitic Nation of Islam leader Louis Farrakhan, implied that U.S. foreign policy in the Middle East is “governed” by considerations of Israel. (Ellison, the first Muslim elected to Congress, is running for attorney general in Minnesota and is not seeking re-election. Omar is seeking his seat.)

Left-wing activists have also drawn Democratic politicians into controversy. Sen. Kirsten Gillibrand of New York, a potential 2020 presidential candidate who has recently tacked left, penned a glowing writeup in Time magazine of controversial progressive heroines Tamika Mallory and Linda Sarsour. Mallory, in a non-apology steeped in progressive terminology, has since defended her relationship with Farrakhan. Sarsour, who argued that Zionism and feminism are incompatible, is a prominent supporter of BDS.

“There’s a lot of evidence that defining liberalism through an intersectional lens has had the effect of casting Israel as an ‘oppressor’ and thus a nation worthy of condemnation even as its actual policies on issues associated with intersectionality are infinitely better than those of its neighbors,” KC Johnson, a history professor at Brooklyn College, told JTA.

The Republican Jewish Coalition is expected to make the rise of the left a target of its activism. It already has run ads in a Philadelphia congressional district where the Democrat, Scott Wallace, faced heat after a charity he runs was shown to have given to anti-Israel groups. (He said he wasn’t aware.) RJC spokesman Neil Strauss told ABC News that anti-Israel rhetoric has become mainstream in the Democratic Party.

“They’ve jumped right now from some cautionary-type language to outright hostile language on Israel,” Strauss told ABC. “These people are becoming the standard-bearers in the Democratic Party and it’s unfortunate.”

Halie Soifer, executive director of the Jewish Democratic Council of America, said there is no contradiction between Democratic politics and Jewish interests.

“Given President Trump’s alignment with neo-Nazis and in his politicization of Israel as a partisan issue — not to mention his radically right-wing domestic agenda — we are confident that the overwhelming majority of the Jewish electorate will continue to support Democrats in the upcoming election,” Soifer told JTA. “JDCA is supporting Democratic candidates who share our policy platform and values, and we have, in some instances, spoken out against candidates who are not aligned with our views. JDCA is proudly serving as the voice of pro-Israel and socially progressive Democrats, and we will do everything in our power to ensure that the Jewish community’s values are represented in the midterm elections.”

“Every election, Republicans attempt to use Israel as a partisan wedge issue, and every year they fail to get a majority of the Jewish vote. This year will be no different.”

Although anti-Israel attitudes certainly exist within progressive circles, some liberal Jews believe they are on the margins.

“I believe that support for Israel remains as strong among both Republicans and Democrats as ever,” said Jack Moline, executive director of the Interfaith Alliance and the former head of the National Jewish Democratic Council. “However, just as people who were formerly on the margins of both parties are now considered part of a big tent, ideas that were once marginal in Israel are being entertained by mainstream leaders.

“For a liberal Zionist like me, objecting to bad policy in Israel is an indication of deeper concern, not lesser support,” he said. “Consider it a victory for the reactionary right that honest disagreement with the current administration has been successfully depicted as betrayal.”

Daniel Shapiro, the former U.S. ambassador to Israel under President Obama, said there is no contradiction between liberal values and Zionism, which he said “is the expression of the wholly legitimate right of the Jewish people to sovereignty in their ancient homeland.”

“If there are those in the Democratic Party or the progressive coalition who misunderstand that — there may be some, but we tend to exaggerate the phenomenon — it is incumbent on people like me to educate them about Israel’s inherent legitimacy,” he said.

The larger divide, Shapiro said, relates to the Palestinian issue, not Israel’s existence.

“An Israel that is seen as still seeking to keep a realistic two-state solution alive, where its security needs are met and it is recognized as a Jewish state — and even though Palestinian leaders have not yet met their obligations to make that outcome possible — will not have trouble retaining the broad, bipartisan support it has historically enjoyed,” he said.

Jill Jacobs, executive director of T’ruah: The Rabbinic Call for Human Rights, said the Pew study was flawed because it suggested that support for either Israel or the Palestinians implies a lack of advocacy for the other.

“The question of whether one is pro-Israel or pro-Palestinian is a false dichotomy. We need to stop asking questions, in polls and otherwise, that suggest that one must choose between the human rights of Israelis or Palestinians,” Jacobs said. “The only defensible position is one that stands up for the human rights of both — and insists that these are not in conflict.

“That means working toward two states, and opposing the occupation and the growth of settlements that entrench it. This is the position of the Israeli left who should be the natural partners for the Democratic Party — in contrast to the Republican Party, which has allied itself with Likud, the Jewish Home party and the rest of the pro-settlement, pro-occupation hard right.”

Others see the Democrats’ continued embrace of progressive Israel critics like Ocasio-Cortez, Omar, Ellison, Sarsour and Mallory as further divorcing their party from Israel, leaving liberal Zionists — a majority among American Jews — in political turmoil.

“Democratic base voters are more hostile to Israel than at any point in decades, which will produce a less supportive House Democratic caucus next year,” Johnson told JTA. “As the 2020 presidential primaries take shape, it’s easy to imagine more ideologically flexible contenders such as Kirsten Gillibrand or [California senator] Kamala Harris sharply criticizing Israel to boost their standing with progressive activists.”

A Wider Bridge, a pro-Israel LGBT group, insists that it is doing just that: making the progressive case for Israel.

“Israel has long received broad support from both Democrats and Republicans. I believe that is still true today,” said Ronit Bezalel, the group’s communications director. “Much of our work at A Wider Bridge is to make the case for Israel among progressive allies. We do not believe that support of Israel excludes the concerns raised on behalf of the Palestinian people.”