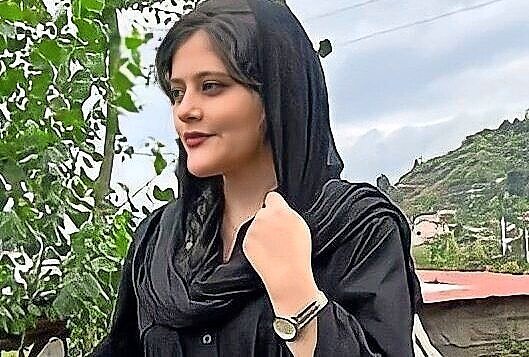 Mahsa Amini, the 22-year-old woman killed in Tehran by Iranian “morality police.” She died in the hospital on Sept. 15.
Twitter

The protests in Iran over the killing of Mahsa Amini for not wearing a proper hijab present an opportunity that Washington won’t take.”
By Ruthie Blum

The killing of Mahsa Amini in Tehran last week should serve as a reminder to the United States about the regime that it’s desperate to enrich with tens of billions of dollars in exchange for another disastrous nuclear deal. And the angry street protests that have erupted around the Islamic Republic since then should signal to the P5+1 that now is the time to help weaken, not strengthen, the grip of the ayatollahs on the populace.

Amini, a 22-year-old woman from Saqez in Iran’s Kurdistan Province, was on a trip with her family to the country’s capital on Tuesday, when she was arrested by the “morality police” for not having her head covered properly. According to eyewitnesses, she was beaten as soon as she entered the van that was transporting her to the station for “education.”

By Friday, she was dead. One can only imagine the kind of torture she endured before she was taken to the Kasra Hospital in northern Tehran. Photos that emerged of her lying in a coma matched the medical center’s statement that when she was admitted on Sept. 13, she showed “no vital signs.”

This notice was removed from the hospital’s social media pages after hardliners called its staff “anti-regime agents.” In parallel, police denied having beaten Amini to death, insisting that she had passed away from a heart attack.

Compounding the lie that nobody bought — least of all her family, who said that she had been perfectly healthy and never suffered from cardiac problems — President Ebrahim Raisi, as much of an Islamist extremist as his mullah handlers, reportedly requested that the Iranian Interior Ministry open an investigation into the incident. The charade would be laughable if it weren’t so typically evil.

Ditto for the response of the regime (a member of the UN Women’s Rights Council) to the demonstrations that ensued upon news of Amini’s demise and continued throughout her burial in Saqez on Saturday. During the funeral, women removed their hijabs and mourners chanted “Death to the dictator,” referring to Supreme Leader Ayatollah Ali Khamenei.

Ironically, reports that Khamenei was severely ill with a bowel obstruction, along with rumors that he may even have died, were countered on Saturday with an appearance by the octogenarian cleric at a religious ceremony.

Meanwhile, Iranian security forces were busy trying to nip the unrest in the bud, with mass arrests and other means. These included firing on the crowds at Amini’s gravesite, where her tombstone was engraved with the message: “You didn’t die. Your name will be a code word [rallying cry].”

Whether Amini becomes a symbol like Neda Soltan (the young woman gunned down in Tehran on June 20, 2009, during a mass demonstration against the rigged results of the presidential election that had taken place a week earlier) remains to be seen. But the similarity is inescapable.

Though the 26-year-old aspiring musician was not a political activist, she had shed her chador in defiance of the Islamic dress code. She was shot by a rooftop sniper, a member of the Islamic Revolutionary Guard Corps militia.

Photos of her lifeless body, with her eyes open and blood trickling from her nose and mouth, became a symbol for the so-called “Green Revolution.” Before it fizzled out — thanks to then- President Barack Obama’s deference to the powers-that-be in Iran — the internationally viral phrase “We Are All Neda” seemed to indicate a crack in the regime’s armor.

Given the current circumstances, with Obama’s political and literal successors following the same old blueprint with Tehran, it’s unlikely that Amini’s death will have any more of an impact than Neda’s, however.

If there was any hope to the contrary, US Special Envoy for Iran Robert Malley put it to rest on Friday through a pathetic post.

“Mahsa Amini’s death after injuries sustained in custody for an ‘improper’ hijab is appalling,” he tweeted. “Our thoughts are with her family. Iran must end its violence against women for exercising their fundamental rights. Those responsible for her death should be held accountable.”

No, he wasn’t joking; and he’s still bent on filling their coffers. He doesn’t have to worry about Khamenei being out of commission, though, since the ayatollah-in-chief gave Raisi the authority to make decisions on the nuclear pact in his absence.

Nor is it true, as a senior Israeli official told reporters last Monday, that the administration in Washington has “sidelined” Malley, a key architect of the 2015 Joint Comprehensive Plan of Action (JCPOA) from which then-President Donald Trump withdrew in 2018. A “conflict resolution” expert and advocate of engagement with Hamas and the Muslim Brotherhood, Malley has been so eager to appease Tehran that his second-in-command, Richard Nephew, quit his team, and others followed suit.

“Rob [Malley] … is still very much in charge of … our efforts,” said State Department spokesman Ned Price in his press briefing on Tuesday.

“[He] is deeply engaged day-to-day on the substance of this. He is leading a team here at the [State] Department. He is regularly engaging with our counterparts at the White House, the Treasury Department, the intelligence community and elsewhere regarding our efforts to achieve a mutual return to compliance with the JCPOA and our contingency planning, as well.”

Asked during his briefing on Friday about what’s holding up the deal, Price replied, “What I can offer is our assessment, and there is only one reason that we have not yet reached an understanding on a mutual return to compliance with the JCPOA, and that is because Tehran has not yet accepted the reasonable basis presented by the EU as coordinator of the JCPOA talks.”

He went on, “As we’ve said repeatedly, gaps remain between the United States and Iran, or between Iran and the rest of the P5+1. … And it’s clear from Iran’s response that these gaps still remain. Iran’s response did not put us in a position to close a deal, but we continue to contend that it’s not too late to conclude [one].”

In other words, the ball is in Raisi’s court. And Amini’s murder — for the crime of exposing too much of her face — is as meaningless as Malley’s mealy-mouthed criticism of it.