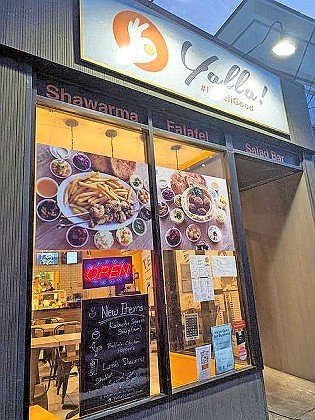 Online restaurant reviews are the latest battleground for anti-Israel activists who recently targeted a kosher eatery in Teaneck with a barrage of anti-Semitic comments.

Yalla is not on a major thoroughfare nor does it have a clientele base from outside of the Northern New Jersey Jewish community. What it does have, however, is an Arabic name — yalla, which is commonly used in Israel and means “let’s go” — and that has attracted online attention, though not in a good way.

According to Yalla’s owner, Jacob Goldberg, who is Israeli, over the last few years, he has gotten a number of one-start reviews from people claiming “I stole their land, I stole the name, I stole the food. It has nothing to do with anything here. It’s ridiculous.”

Most of the time, Goldberg simply flags the reviews on Google and asks that they be removed.

“Sometimes,” he explains, “it’s very obviously hate speech, and it comes down. But if it’s food-related — like I found a hair in my food — even though someone from Damascus is posting it and has obviously never been to my restaurant, the computer doesn’t flag it.”

So Goldberg decided to take a new tactic: He responded to a review himself, setting off a firestorm as the pro-Palestinian reviewer threatened, “Let me show you what I can do.”

Within a few days, Yalla’s Google profile had been shared widely within pro-Palestinian circles, and the restaurant received hundreds of new negative reviews overnight. A woman posted a widely viewed TikTok video in which she said, “So this Israeli restaurant in Teaneck, NJ, is falsely advertising Palestinian, Middle Eastern food. This is what their menu looks like, falafel and shawarma. Uh no. So, us Palestinians have to do the job. They messed with the wrong people. … Free Palestine.”

Within hours, Yalla’s 4.6-star rating (out of a maximum of five stars) collapsed, eventually falling to 2.8, the reviews filled with comments like: “Stolen Palestinian food and the owner has left his manner … cultural appropriation at it’s [sic] finest … bad place DON’T GO THERE AND WASTE YOUR MONEY!!!” and “No one food on here is ‘Israeli.’ Keep it moving guys this place is absolutely trash and their food has NO taste yet overpriced. They steal the thoughts and the lands and serve you [explative] on a plate. Never again.”

Goldberg believes there were at least 300 one-star reviews posted that night, some of which included Palestinian flags and the words “Free Palestine.”

After having no luck reaching out to Google himself, Goldberg reported the incident to the Anti-Defamation League, which confirmed it is a case of anti-Semitism.

“This concerted effort to drive down reviews as a way to harm individuals and not a political entity is what ends up being problematic and downright anti-Semitic,” said Alexander Rosemberg, deputy regional director of the ADL NY/NJ Region. “It is absolutely wrong.”

“It’s like picking on someone to target in the middle of Times Square because he is wearing a yarmulke, it’s just a digital force instead of physical means,” he added.

“To target a kosher restaurant in New Jersey and hold it responsible for a global political conflict is undeniably anti-Semitic,” said Liora Rez, executive director of Stop Antisemitism.

Rosemberg said the ADL’s Center for Technology and Society maintains contact with the Big Tech companies and has been speaking with Google about the Yalla incident.

Though the number of anti-Semitic and anti-Israel reviews was troublesome, what happened next, said Goldberg, was heartening. Several Jewish and pro-Israel groups rallied to counter the negative reviews helping to drive Yalla’s rankings back to where they had been before the cyber fight.

According to Goldberg, since the news of the cyber battle broke, people have been stopping into Yalla “just to show their support.” And that, he said, “feels amazing.”

When asked if the attention would cause a spike in business, he replied: “In the short term, I’ve been getting a lot of support from Jews who felt they had to come out and fight hate. I don’t think there will be much impact in the long term. I spoke to many people who think Google reviews are mostly fake anyway, especially if you see pro-Palestinian reviews. They trust the old-fashioned way of reviews from friends and family. So probably not much impact.”