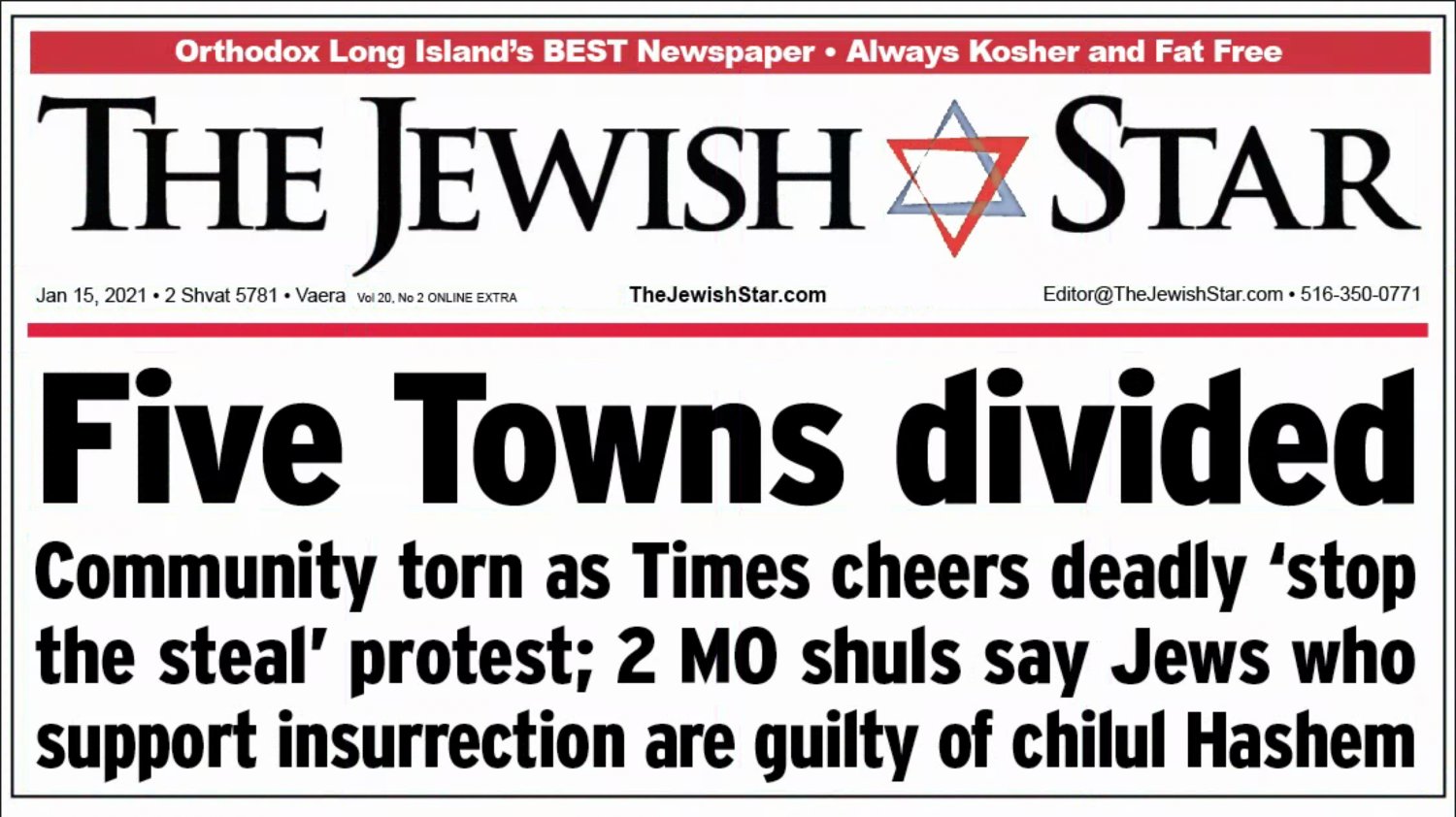 Here's what The Jewish Star's front might might have looked like last week. As pre-scheduled, the Star skips two weeks of publication in January, returning B"H on Jan. 21.
By Ed Weintrob

As pre-planned, The Jewish Star did not publish over the last two weeks; we typically take a break in early January.

Let’s all take a deep breath.

Those of us who are not addicted to social media may be blessed to avoid screens spewing venomous lashon harah on a scale the Chofetz Chaim would have found unimaginable. For the rest of us, Shabbos can at least provide a reprieve — provided we avoid indulging in politics around the Shabbos table, or reading nasty political content in some of the Jewish periodicals.

I’m not going to lecture Larry Gordon on how to run a newspaper — his business is, after all, successful, and many people in our community appreciate his Jewish Times as well as my newspaper and the Jewish Home. But since our publications are often seen as mirrors reflecting our communities and their Torah values, we have a special responsibility that goes beyond that which rests on the shoulders of secular publishers.

Thus, those who found the Times cover that celebrated the Jan. 6 day of insurrection off-putting at the very least, and more importantly a chilul Hashem, deserve to be heard.

We don’t have to accept Gordon’s unusual justification for how his cover came about to accept his apology. But it’s worth remembering that while this particular cover was extreme, it was not wholly exceptional, and many Times readers (as well as some of our own readers) consider both that cover and the politics of misinformation and insurrection that led up to it to be acceptable when deployed on behalf of a favored cause.

As for the decision by the Young Island of Woodmere and Congregation Beth Sholom to prohibit the delivery of the Times to their sites — these are hardly unprecedented actions; shuls regulate what is distributed within their walls and content deemed inappropriate on any number of levels sometimes lead to restrictions. The Jewish Star, like the Times and every other publication, is subject to such scrutiny by religious institutions that grant us entry each week.

These shuls’ restrictions should not, however, be confused with censorship and “book burning,” as some have done. Anyone questioning whether there is nearly unbridled freedom to distribute almost any newspaper in our community should visit Gourmet Glatt, KolSave or Seasons on any Thursday, for reassurance that freedom of the press is alive and well in the Orthodox community.

What’s not doing well is rational debate, and the radical politics of the Times — along with nasty political content in a variety of Jewish publications — has, cumulatively over years, contributed to its decline.

I’m not saying my newspaper has no guilt in this, although we try to be reasonable and fair. On election eve, for instance, we published a long column by the rabbi of a Young Israel in Queens advocating point-by-point for Joe Biden, alongside one of our regular columnists making the case for Donald Trump. We ran both columns so our readers would know what Biden supporters were saying about their man — even though, as we said at the time, the vast majority of our readers would vote for Trump.

This week, on page 21, The Jewish Star features an opinion piece that considers the problematic nature of radical politics in Orthodox communities. Some of our readers may be offended by its author’s suggestions, but they include arguments worth discussing. The goal of such arguments is to discover what is true and what is not, and as long as such arguments are conducted respectfully and within the bounds of civil and Torah law, they are not only permitted, they are required.

People have all sorts of weird ideas and not everyone falls short of believing that the world is controlled of lizard-people or that politicians have been running a pedophile ring out of a Washington DC-area pizzeria. It’s not my mission to disabuse people of these notions, but simply to report facts and provide a platform for rational opinion.

Before the election, I wrote that the issues that concerned us at that time would be with us after we voted regardless of who won, and that new issues, “many unanticipated, will challenge us as well.

“To ‘guard our tongue’ and avoid lashon harah does not mean we should overlook evil or danger, but rather that we think before we speak and consider the power of our words.

“When the stakes require it and we speak with passion, we must ensure that foremost in our hearts and minds is a preeminent passion — our imperishable love for our fellow Jews.”

We need to lower the decibel level. Now.

And in no instance should we threaten each other (let along our veteran rabbis) or remain silent when ruffians attempt to seize control of the bully pulpit.

Get vaxxed and ready

Changes at shul in time of vaxing, ‘loosening’